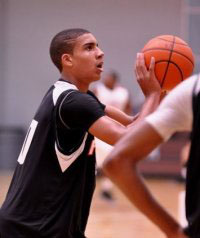 Following the abundance of AAU tournaments in Las Vegas, many programs retired from the west coast and sent their teams to play in tournaments closer to their home region for the final days of the live recruiting period for college coaches. There were however a number of elite programs that stayed on left coast to take part in the Adidas Best of Summer, the final AAU tournament of the summer. Elite programs such as DC Assault, California Supreme, Pump N’ Run, New England Playaz, and Ohio Basketball Club all opted to take part in the event held at Loyola Marymount. As a basketball purist, I must say that standing on the same court that Hank Gathers passed away on definitely gave me crazy chills at times. It bro

We featured a handful of the top PUNKS that were in attendance in LA in our Las Vegas AAU coverage, so here’s a look at some of the other elite players in attendance that we didn’t cover in sin city.

Joshua Hairston | 6-8 | PF | DC Assault | 2010
The future Dukie had a couple of monster games before being bounced prematurely in the playoffs. He fits the mold of the typical long, skilled power forwards that Coach K tends to recruit for his system. Hairston can give it to you inside with his gorgeous footwork on the blocks, yet is also versatile enough to take slower bigs off the bounce. While he’s not the sickest athlete in the class, the Virginia native should be able to get some immediate PT as a freshman due to his awfully polished game.

Tony Mitchell | 6-8 | PF | Brandon Bass Elite | 2010
Another casualty of the prep school reclassification, Mitchell is one of the better power forwards in his new class of 2010. He’s a straight nasty athlete who plays well above the rim, but is also skilled enough to put it on the floor a little and make some very nice passes. Some have proclaimed him as a small forward, but we like him much more as a face the basket four since it would be a shame to see a player with his level of activity and hops stand around the perimeter. Mitchell verballed to Alabama last year, but has apparently re-opened his recruitment to any takers.

Noah Cottrill | 6-2 | PG | Ohio Basketball Club | 2010
Bob Huggins’ first recruit to WVU definitely doesn’t pass the look test of one of the better point guards in the country. For what he lacks in athleticism, he makes up for in terms of toughness on the court. Cottrill must have hit the deck on an average of nearly 10 times a game from what we saw, both from attempting to take charges and attacking the rim with reckless abandon. If he hopes to receive maximum PT, he’s definitely going to

have to improve upon his D to get major burn as a frosh.

Gary Franklin | 6-2 | PG/SG | Mater Dei | 2010
Instead of playing with his AAU team, Franklin opted to play with his high school squad for Best of Summer. After a rough performance in Las Vegas in the games we peeped, he was downright nasty in his hometown. The former USC commit shot the lights out of the ball from beyond the arc and showed off bigtime scoring instincts. While he plays with too much flash for his own good at times and doesn’t run the show incredibly well, he’s surely a guy who is going to put points on the board wherever his home at the collegiate level is.

Mychal Parker | 6-6 | SG | Ohio Basketball Club | 2010
When you take a first glimpse at Parker, it appears that he’s a can’t miss guy. With killer size, the ability to shoot from beyond the arc, and a blazing first step, it’s clear why he’s one of the top wings in the country. The problem is that his performance doesn’t always mirror the talents that he has. A 20+ point outing will be followed by a single digit performance, which explains why he’s taken a tumble in the national recruiting rankings as of late. Once Parker puts it all together and gets a little more polish to his game, he’s got a chance to do some serious damage in college.

Norvel Pelle | 6-10 | PF/C | Team Odom | 2011
Despite only being 190 bounds soaking wet, this toothpick really turned some heads with his play in L.A. Numerous big time colleges that we were sitting by were drooling over his long term potential, with many boasting that they’d be making scholarship offers within the coming weeks. Pelle ran the floor like a deer, could jump out of the gym, and was surprisingly tough with his lean frame. He turned some heads with knocking down a couple of 15 foot jumpers and finishing around the cup with

both hands. After flying under the radar for his first two years of high school (he isn’t ranked in the top 100 by any of the major recruiting services), Norvel is beginning to establish himself as a stud prospect with some serious buzz around him.

Landen Lucas | 6-8 | PF | Northwest Panthers | 2012
Though just finishing up his freshman year, Lucas played up on the 17-U age group of the tourney. Virtually every head coach in the Pac-10 stopped by to catch at least one game of this talented youngster. He’s tough, crazy long, and can even hit the short jumper facing the basket. High major programs across the country will be keeping a close eye on this rising soph for the years to come.

Rodger Bohn is a former director of prep scouting for DraftExpress. 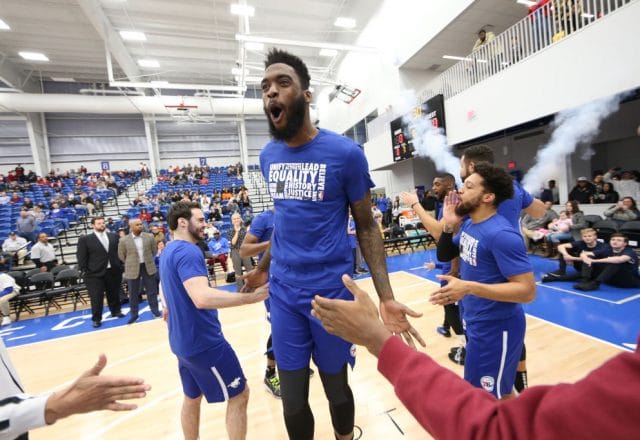