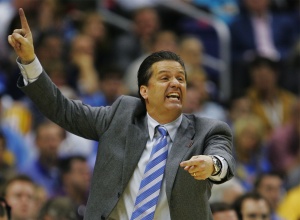 Being objective towards a certain team has been an issue for sportswriters since the craft’s inception. We fortunate ones, get into this field because we love the game, the written word, and very possibly a specific team.  But once the press pass goes on, we are immediately asked to reprogram ourselves into just astute observers.

In terms of college basketball, I have never had a rooting interest in just one team, although, over the years I have found myself glomming on to one team or two.  For example, I was a huge Kansas fan (still probably my deepest allegiance) during the Danny Manning/Larry Brown days of the mid-late 80’s, loved the Jimmy V-led North Carolina State teams, and more recently grew extremely fond of the UConn teams of the late 90’s.  But there has never been one regional team that had me on lockdown.  While the state of Colorado will never be confused for Tobacco Road, there are some quality programs, but none that ever stole my heart.  (It also didn’t help when some of these schools passed on me as a high-school player.)

Last year, I found myself becoming a supporter of the Memphis Tigers.  Three days with the team before the start of official practices last year for a feature story for #114 made me not only a believer in the team’s potential success, but also a fan.  With the help of CSTV, I was able to catch the majority of their games through out the year, and not-so secretly pined to see them make it all the way to the title.  Alas, those pesky Jayhawks from the aforementioned Kansas ruined the Tigers’ dream season with an unbelievable comeback, overtime win.

Fast-forward to current day.  Three key members of that 38-win (for real, they won that many) team were swooped up in this past May’s NBA Draft, highlighted with Derrick Rose being selected #1 overall by the Chicago Bulls. Not resting on his laurels, Head Coach John Calipari lured one of the top prep players in Tyreke Evans down to the Bluff City, but as most of you know, the recruiting trail is long and never-ending.

Coaches have long been known to send cash, cars, and in the case of former Indiana Head, Kelvin Sampson, a boatload of text messages to potential players. What came out last week about some possible misconduct in Coach Cal’s program, though, had me in thought this past weekend.

Spend a day in Memphis and it won’t take long before you realize the influence of shipping giant, Federal Express.  From their SuperHub at Memphis International Airport to buildings erected in its namesake, FedEx has an omnipresent feel.  Not only is the arena inhabited by the Tigers, called the FedEx Forum, but the majority of the carrier’s executives are courtside commonplace.  One in particular, however, took things a bit far.  Company President and CEO, David Bronczek decided to place a phone call to one of the more than 190,000 FedEx employees worldwide; a call that was made to the western American outpost of Tacoma, WA.  On the other line sat customer service representative, Oseye Gaddy, delighted, surprised, and confused as to why her company’s BIG BOSS MAN was calling her. When the discussion immediately turned to her son, the city of Memphis, and Coach Cal’s program, Gaddy knew something was fishy.  Her son, mind you, is point guard, Abdul Gaddy, one of the last remaining uncommitted stars of the prep class of 2009.

Choose whatever euphemism for “illegal-doings” you want, but do you consider this cheating?  For years, well-greased, loud-talking, big-donor alums have been lining the pockets of recruits, players and their families.  Whether through straight cash or falsifying job opportunities, college athletes have always been “taken care of” by the boosters.  While the list of Memphis University athletes that have or currently possess employment with FedEx is surely longer than that of St. Nick’s (and more than legal,) the level of “shenanigans” in this endeavor is a bit unclear.  The admitted candor of the conversation on both parts obviously eliminates the potential “he said/she said,” which leaves me with just one real sticky issue, the fact that the dude lobbing the call was the biggest of the big wigs for what amounts to an entire metropolitan city.  If Gary.Jones from accounting, Shirley from sales, or even Mr. Bronczek’s personal assistant makes the exact same call, is the cloud of dust so notoriously centered on the Mid-South?

I will admit my admiration for Coach Cal.  He took time to sit-down with me for extremely candid conversations, once after a “practice” and an impromptu one when he plopped down next to me while I was sitting alone at a table during last year’s Conference-USA Media Day.  I know that he has his detractors and his cup of coffee in the NBA was a bit flat, but for what he has given the game of college basketball and the cities where he has coached, he is more than worth the huge extension he penned this past April. Calipari inherited a team that was fresh off of two-straight losing seasons; they immediately won twenty games in his first season and his teams have won 77% of their games over his eight years at Memphis.  The Tigers have made five appearances in the NCAA Tourney, making two-straight Elite Eight trips before last year’s final shot.  The other three seasons were all Final Four NIT runs.  He lets his kids play a fun style of basketball in a city that worships the hardwood the team runs and shoots on.  It is an attractive package for any top high school talent.

Cal’s positive feel can be felt outside the court, as well.  When he first came to Memphis back in 2000, the graduation rate of the basketball team was 0%.  In his first seven years, 12 of the 15 seniors that have played for Coach Cal have earned degrees.

And as a former educator myself, that alone carries weight.

That philosophy is about as honest as one can get.

Where I ultimately fall out on this entire FedEx issue, though, is kind of a cop-out.

I just think there are much worse things going on across the country.

Yeah, it’s not the most moral route to take, but I am more of a big-picture kind of person.  What that call made by Bronczek does to impact the future of Memphis University, Coach Calipari, or even the young Gaddy should and hopefully will be, minimal.  If Gaddy decides to head Bronczek’s words, however, the time spent with Cal will be with him for the rest of his life.