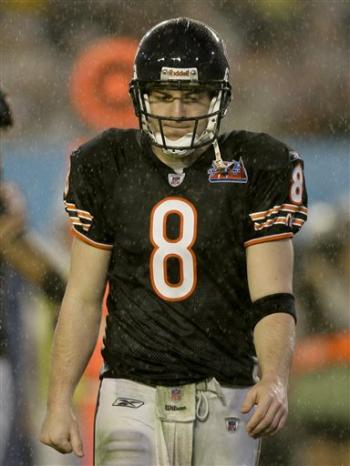 With about 1:48 left in the Super Bowl last night, I did one of those aimless glares at a TV zooming too far on the face of Rex Grossman. The Colts were just starting to clasp the Gatorade container, the red plastic cups in front of me were all tipped and emptied, and this 26-year-old kid is finally starting to realize that this game, the pinnacle of his profession, might be the last time he sees a football field that doesn’t say “CFL” on it.

And in this terrible wretch of a Super Bowl, one of those great American past-times that makes you feel bad if you turn it off then wonder why you waited that long to stop watching to begin with, I still sat there and watched this career dwindle away. He’ll be a footnote, if anything. They’ll call him Trent Dilfer-lite. He’ll be all too easily forgotten.
But while you watch him fade off the cultural map, remember something: this is probably why you love next month so much.

Remember a year and eleven months ago, watching Darius Washington Jr. step up to the line with nothing but zeros on the clock, just needing to make one free throw to make it into the NCAA Tournament and thinking, “if this kid doesn’t make one of these, he’s never going to get over this”? Then, just as the back of your mind warned, watching him futilely clank both off of backrim.

Rex Grossman could just walk off the field. Darius Washington, at barely 18-years-old, fell to the ground and cried. He declared for the draft a year later and wasn’t drafted. The parable is the same. The results and the emotions of the endings are much more public.
So can’t these next few months — minus the better commercials, the two hours of pregame, Prince and his almost literal dog and pony show — be even better? This year especially, with no clearcut number one, it’s open season. Look at the weekend.

Sure, UCLA is rivaling Walton-era successes and Wisconsin may have the best player in the school’s history in Alando Tucker (this coming from a school that has churned out Michael Finley and Devin Harris) and Florida is that same 2006 National Champion Florida. They all proved that on Saturday. But the one constant — Duke remaining strong enough to not have any sympathy for them — is even out the window, with their Super Bowl Sunday loss to FSU. Their rivals, UNC, had just as bad of a weekend and will probably fall from #3 in the polls because of it.

We even have our perfect human interest stories: Iona’s first win, BC’s anchor-less push, and some sleeper cadets at Air Force.
So don’t ask where we go from here. For all of those biting their nails tonight for the end of football, pledging that they’ll watch some Arena Football for the fourth straight year and never actually do it; those who sigh and wonder how they’ll even get through the next six months and beg for the end of summer to come sooner, just remember what happened earlier this weekend and forget about Sunday night.
We might have more Darius Washington (or, now, Rex Grossman) flashbacks than our poor adrenaline can handle.