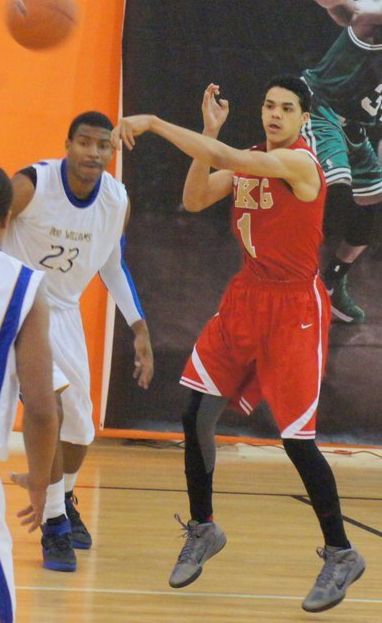 I first met Kiefer Douse (Lee Academy, ME), a combo-guard who hails from Toronto, Canada, at the Hoop Group Jam Fest in Providence, RI. Though this story was initially supposed to drop on the Hoop Groups website, Douse was hyped about the possibility of having a story here on SLAMonline.

Can you blame him?

As many other notable Canadian players have done of late, the slippery scoring guard has been moving back and forth from Canada to America in an effort-filled attempt at playing college and, ultimately, professional basketball. Canadian players who are considering jumping their southern border should be interested to read of Douse’s adjustment to the American game, as well as all that is offered here as far as dreams on the hardwood are concerned.

SLAM: Growing up in Toronto, being from Canada, why didn’t you get into another sport—namely, hockey? What is it about basketball that intrigued you and made you step on the hardwood and keep playing?

Kiefer Douse: We are a basketball family! And yes, I think for most Canadian families the focus is on putting their child into hockey and hoping for the NHL. The NBA was always the goal for my brother Kris and I. He was the one who introduced me to the game of basketball and the love and passion he had for it rubbed off on me. Kris has taught me all I know in relation to the sport and will be a big part in any career-based decision I make going forward. I think there is a lot more athleticism and a lot more strategy and teamwork involved in basketball than say, hockey–it’s a physical sport that requires thought, much like football does. Besides, even though I am Canadian I am NOT a huge fan of snow and ice.

SLAM: Describe your hard work growing up to get to this point.

KD: I’ve never known a week to go by in our house where basketball didn’t come up at the dinner table or where either my brother or I weren’t in some way involved in the sport. I have been working my butt off to accomplish goals that I’ve set and I continue to push myself because until I am in the League, I remain far from satisfied. Having said that, I am blessed that a lot of good has come my way over this last year. I have been working out with my brother’s trainer out of Pittsburgh (Coach Pete Strobl) and after working out with him I have seen enormous improvement in my game. If that is not enough to get me into top shape, I have a full summer of workouts with the great John Lucas out in Houston TX. Being the underdog doesn’t mean you take a back seat, it only pushes me harder to one day have Canada recognize me as a premier player. The Americans have seen it and blessed me – I want the same recognition from the country from which I was born. As I said, the USA supports greatness—other nations could learn from their example.

SLAM: Could you describe the disadvantages of coming from Canada and having to adjust to the American game?

KD: There are a few major disadvantages for kids from Canada adjusting to the American style of play. One major one that I have noticed is the intensity the American kids bring to the court when they play. This is no accident either—it’s another example of Americans being about greatness and being the best. This intensity is taught and learned at a young age to the kids by their coaches. When I played my first tournament in the States I remember I was almost in shock because I had never seen kids play that hard [or that loudly], but by coming to the USA earlier in our high school careers we get a feel and have more time to adjust, we get the benefit of that American “be the best you can be” training. That’s why we see a lot of kids coming over from 8th and 9th grades now—to benefit from the American system and their style of play and their training techniques, which are both physical and mental.

KD: The three things I would have to say Canadians “got” over the Americans is the free health care our government provides–true, the wait lists can be long and its bureaucratic, but at least if you need it, it’s there. And, of course, to the Canadian ladies—the women over in Canada are more beautiful and of course, we have Toronto’s Caribana. This is the greatest party on earth where everyone gets together and celebrates on the streets of Toronto for the day. It’s a once in a lifetime experience and for those who have never been to Caribana should add it to their “Bucket List.”

The three greatest things in America to me are, of course, on the basketball side of things. There are endless opportunities to reach your dreams and if you don’t have dreams in your life, what do you live for? This is what the American Dream is based on–giving people hope and opportunity–not just to own a home and have a job–but to live out their dreams through hard work! The food is another big one. I have added 15 pounds this year alone just munching on all the greens and mac & cheese [laughs]. Another great plus in America is all the large cities it has. Canada only has a few major cities and all the jobs are monopolized in one spot. In the States there are 30+ places you can go and experience a different side of culture, while still being within the USA.

SLAM: What are your offers and interest looking like right now?

KD: As for offers and high interests, I have a few and it has picked up enormously over the past few months. The list is like this:

SLAM: Are there any schools that pop off the list or that you have dreamed about playing for?

KD: Yes–two of them so far. Texas Tech and Clemson. My mom loves Texas! And, having been in Texas my freshman year, I always heard about the Red Raiders. Also, Clemson has been one of those teams I watched when I first started playing basketball because my brothers teammate attended Clemson. I’ve always liked Clemson’s style of play and how they played in the ACC, but the ultimate dream school for me would have to be Arizona or UCLA. I just love the tradition and the west coast. Hopefully, when my time comes, I can sign a LOI to one of these schools.

SLAM: Who do you model your game after and why? Who are your favorite players in the NBA?

KD: Kendall Marshall is the person after whom I model my game. He’s a big guard who can score, but loves to pass first and can find guys for easy buckets. We’re just efficient at our jobs and have the same winning attitudes. Chris Paul and Kobe are my favorite NBA players, if you`re looking for guys who can get it done on the floor whether its score, or find a teammate, those guys do it well.

SLAM: What are your goals with the game of basketball? How far do you want it to take you?

KD: My goals in terms of basketball are to be an NBA All-Star, If that doesn’t happen I just wish to play pro basketball and make a good living out of it. At the end of the day, the math is fairly simple: I just want to provide for my family and make sure they want for nothing. If I get the blessing to do this through a sport I love live and breathe, it would be beyond awesome.

SLAM: Tell me a few things that your audience might not know about you.

KD: A few things that y’all might not know about me are I love to fish. Fishing is my favorite hobby besides basketball. I enjoy how fishing relaxes my mind and I can enjoy the outdoors with a nice view. I came to love fishing and learn of its benefits from a Pastor in Texas–thank you! Also, I come from a family of four siblings, the eldest being Kris, then Kirk and the pretty princess Kastille. We are all fairly close in age. Also, I’m a dual citizen–Canada and England–so I will be playing for the British National team next summer before I attend college.