Duke Will Play Three Games In Canada In August 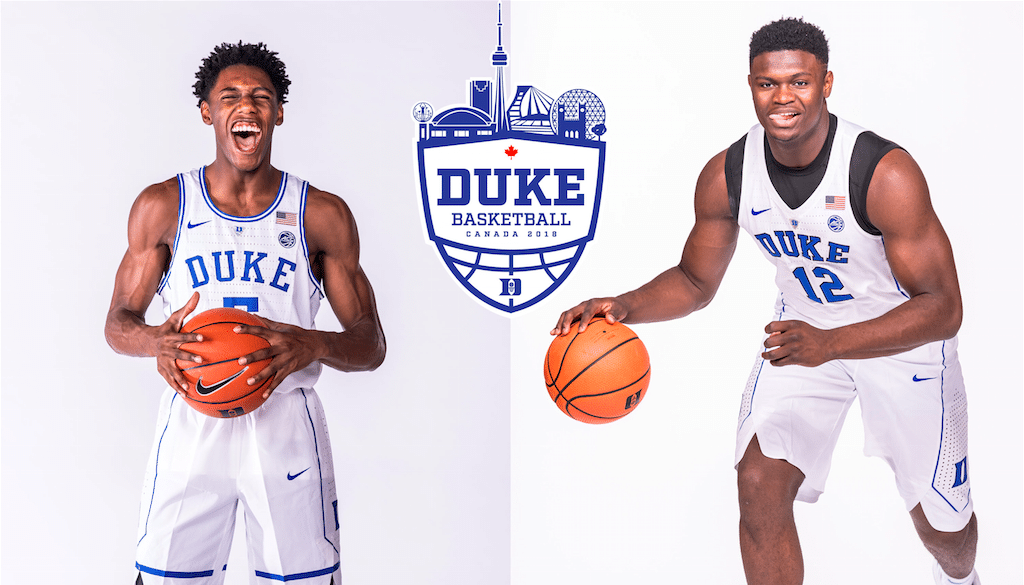 On Tuesday morning, the Duke men’s basketball program announced that it will go on a Canadian Summer Tour in August, which will technically serve as the debuts of its star-studded freshman class.

See below for the official announcement from the event’s organizers:

For the first time, the Duke men’s basketball team will travel to Canada to compete in the Duke Canada Tour. The Blue Devils, who are led by the all-time winningest coach in NCAA history – Mike Krzyzewski, will be debuting their no. 1 ranked freshman class. Duke will face off against Ryerson University and University of Toronto at Hershey Centre in Toronto, and McGill University at Place Bell in Montreal. The tour will take place August 15-19, with all three games set to be broadcast by ESPN in the United States, and TSN and RDS in Canada.

Esteemed Canadian R.J. Barrett leads Duke’s 2018-19 freshman class, which is regarded as one of the best in college basketball history. The class also includes Zion Williamson, Cam Reddish and Tre Jones, who are ranked nos. 2, 3 and 10 respectively, on the ESPN 100 Class of 2018 behind no. 1 ranked Barrett.

The games will be played at the Hershey Centre in Mississauga, Ontario, and Place Bell in Laval, Quebec. The 5,395 seat Hershey Centre is home to the Toronto Raptors’ G League affiliate, Raptors 905. Place Bell is a 10,000 seat multi-purpose venue, which houses the Montreal Canadiens’ AHL affiliate, Laval Rocket (Rocket de Laval).