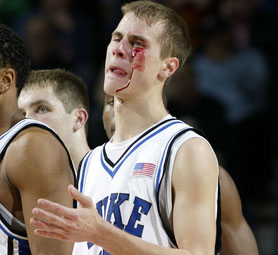 My bracket took a big hit yesterday. I lost on Duke, GW, BYU and Gonzaga so I hope today turns out better. My final four remains intact so I do feel good. Currently I’m in 29th place in our office pool but I’m known as a strong finisher.

That was a lie, I’m not known as a strong finisher but I like to think of myself as such. Now you guys know, so yeah tell everybody you know. The best thing about the losses was how everyone was shocked Duke lost. I know it qualifies as an upset anytime Duke loses but I didn’t have them getting past Pitt anyway. Yeah beating losing to VCU is crazy but look at their roster and tell me who is the go guy? I thought Gerald Henderson would do something but so far no much. I guess Scheyer is their best player but that isn’t saying much at all.

What was weird was all the satisfaction everyone has whenever Duke goes down. People make subtle and not so subtle jokes. People are smirking on air; strangers on he train damn near hi-fived this morning. Some of them didn’t even go to UNC or an ACC school. There are dudes who didn’t even go to college who hate Duke and I’m like, for what? Why not hate Texas or Michigan St or whomever? I feel as though people hate Duke because that’s the status quo thing to do and that annoys me.

See, I hate clones. I hate them like the Enron guys. I really dislike them. We all are occasionally susceptible to small amounts of groupthink but don’t adopt a ideology and its accompanying rules just cuz. It’s weak, real weak. The consensus beef seems to be that Duke always plays the goodie-goodie card but are really the scum of the Earth and Coach K is somehow Satan and they have an elitist attitude and so on. I don’t care about Duke anymore or less than UNC or Arizona but what’s the point of hating? I need a reason. Talk smack about the school because of the lacrosse team or the fact Coach K’s facial features resemble their mascot. Something, otherwise it has no feeling behind it when you say it. (It’s like hating Britney Spears because she went bald. It’s her hair right! Who really gives a crap about her haircut anyway? Do people need villains that much that they just search for them on purpose? Well here’s a villain for you, his name is Karl Rove. Cut him open and watch the evil pour out if you don’t believe me.) Can someone who hates Duke but didn’t go to UNC explain what the beef is?