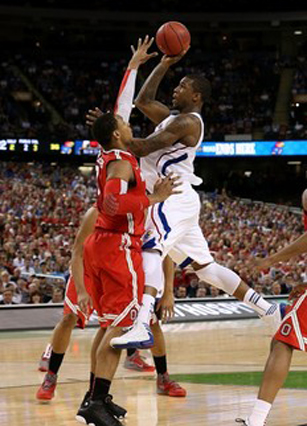 After the type of long travel day SLAM is unfortunately known for (see numerous All-Star Weekend blogs, most prominently this one from All-Star ’08 here in New Orleans, I am posted up (WAY up—I’ll tweet a pic later) in the SuperDome for this exciting Final Four doubleheader.

The first game is the much-ballyhooed battle of Kentucky, featuring the Kentucky Wildcats and the Louisville Cardinals. These two school’s fanbases have a deep-seeded hatred that has only amplified in recent years as current Cardinals and former UK coach Rick Pitino and his current counterpart, John Calipari, have engaged in a passive-aggressive feud.

Kentucky has well-earned favorite status in this game. The Cats boast players projected to go first and third in the NBA Draft  in former SLAM cover subjects Anthony Davis and Michael Kidd-Gilchrist, both freshmen who can dominate at both ends of the floor and in transition. Kentucky, which was the top overall seed for the Tournament, is playing great team defense and unselfishly on offense.

Louisville, which suffered through a mediocre and injury plagued regular season, rallied late, winning the Big East Tournament to earn a 4 seed and showing its considerable grit with a huge comeback win over Florida.

Kentucky has been installed as a 8-point favorite, which actually seems a little conservative to me, but you never know what’s going to happen in a given game, especially with the unpredictable impact of a regional rivalry like this and the fact of playing on such a huge stage.

And indeed, this “stage” is massive—close to 70,000 fans are expected to file into this football venue this evening.

-Decidedly pro-Kentucky crowd. Or rather, Kentucky has the most, loudest fans in here. No shock there.

-Louisville wins tip and Chris Smith scores to give the Cards a 2-0 lead.

-BTW, the flourscentness (word?) helps when you’re sitting this far away. Also: it’s freezing up here. Like, crazy air-conditioning-induced wind.

-No more complaints, though. I’m in a great city, in a pretty awesome building (albeit one built for football), and I expect a pretty entertaining evening of basketball.

-Kentucky backcourt on fire. Teague answers a Smith basket with another jumper. 10-4, Kentucky.

-Kuric with an athletic basket while being fouled. Cuts lead to 10-6 going into official timeout.

-I wish Lang Whitaker, the OG of SLAM Live Blogs, was here with me.

-Kruic misses his FT, and Davis gets loose for a lay-in and then a little post move, as UK extends lead back to 14-6.

-Kidd-Gilchrist heads to bench after picking up a charging foul. 16-6, Kentucky.

-Did you guys know you can get the live boxscore on here, too? Just click this link. (Thanks, Spalding!)

-Early flow of game has slowed a bit. After an extended stretch of uninterrupted play, Wildcat sixth man Darius Miller scores inside to give UK an 18-10 lead. The official timeout finally comes with 9:58 left in the half and UK still up by that score.

-Dieng, who has been totally dominated by Davis thus far, stands his ground in the post and draws a charge from Davis. Then Dieng gets his first bucket of the game. 20-12, Kentucky.

-Big man Kyle Wiltjer scores inside for the Cats to push the lead back to 10 points, with the latest official time out following. 22-12, Kentucky, with 7:58 left in the half.

-Louisville can’t hit any shots. Cards are 5-21 from the floor so far.

-Despite struggles from the field, Louisville not folding. A Behanan fadeaway and Russ Smith steal-and-layup cuts lead to 26-20 with 3:41 left.

-Jay-Z has been spotted in the Kentucky section. Wonder if he was at this Godfather-like dinner Coach Cal hosted last night? That was a great story by former SLAM contributor Dan Wetzel.

-Chris Smith with the steal and awesome around-the-back pass to a trailing Dieng for the and-one dunk. Dieng’s made FT cuts UK lead to 31-28.

-Definitely more Kentucky fans in here, but as the Game Two crowd files in, I’d say the fans who are neutral for this one are rooting hard for Louisville. Everyone loves an upset. Of course, Kentucky has weathered that little burst and pushed lead back to 35-28.

-And that’s how a fast-starting and fast-finishing half (with lots of missed shots in the middle), ends: 35-28, Kentucky. Snack time!

-With their defense serving as the catalyst, the Wildcats push lead to 45-34 going into official timeout at the 15:37 mark of the second half.

-Doing work with both hands in the post, Davis is the game’s high scorer so far with 13 points.

-Kidd-Gilchrist, so good all Tournament and a media darling all week, has 0 points. Shows how deep and diverse Kentucky can be.

-And just like that, MKG goes to the bench with his third foul. He’s now sitting next to one of my favorite college assistants in the country, Rod Strickland.

-With his length and shot-blocking instincts, Dieng is like a poor-man’s Davis.

-Louisville refuses to go away. Wayne Blackshear follow dunk cuts Kentucky’s lead to 46-42 with 11:23 left in the game.

-Unfazed, Kentucky and Kidd-Gilchrist answer back and go up 53-49.

-And that’s the score when the teams break for an official timeout with 7:34 left. I must give this Louisville team credit for its heart.

-Rash of missed shots from both teams keep score at 55-51 for a bit, but then UK senior Darius Miller nails a three from the right wing to push Kentucky’s lead to 58-51. Timeout, Louisville.

-One of Louisville’s best plays on defense this game has been drawing dubious charge calls. A Dieng bucket after the latest charge makes lead 60-53, Kentucky.

-Every time there’s a dunk the scoreboard flashes “SLAM” repeatedly, in a font that looks a lot like ours. Who knew the NCAA had love for us like that.

-Kidd-Gilchrist with the alley-oop to Davis for a one-handed “SLAM”!! that makes UK lead 65-58, with about a minute to play. Davis has a game-high 18 points on 7-8 shooting from the field and 4-6 from the line. This kid is looking like the most obvious first pick in the Draft since LeBron.

-The Cal and Pitino handshake was perfunctory at best, but the players from both teams embracing with class afterwards. Louisville had its moments, but the better team definitely won.

-Ok…got some tweets done and drank some water. Buzz of that game slowly wearing off. Large chunks of the blue sea of Kentucky fans have disappeared, I’m guessing for the night. This should be a great second game, but I’m sure the pull of Bourbon Street is strong. After all, it’s a beautiful 77-degree night and there are Louisville fans to torment.

Game Two of this Final Four doubleheader is Ohio State vs. Kansas.

Talent-wise, these are two pretty equally matched teams. The one for this one is Ohio State by 2 1/2, which seems exactly right to me. But certainly it could go both ways. One of the most intense match-ups will be at point guard, where Kansas has the big and athletic Tyshawn Taylor, who can seemingly get in the lane against anyone, while Ohio State has the strong and athletic Aaron Craft, whose specialty is keeping any and everyone out of the lane.

I used to be a big Bill Self doubter, but he’s shut me up pretty consistently the last few seasons, including his out-coaching of Roy Williams in the Elite Eight last weekend. Not saying he’s better than Thad Matta, but Self is certainly no liability.

These are big, tough teams from classy programs. I expect a very solid game that Ohio State (perhaps with a key shot coming from their old-school big man, Jared Sullinger) winning by a few points.

-Without further adieu, your starting lineups…

-The southpaw Smith knocks down a three for OSU. 3-2, Buckeyes.

-I swear on my life the wind in this pressbox is blowing 15 mph.

-Former volleyball star Withey shows his skills by leaping to steal inbounds pass and dunks to cut lead to 7-6.

-and…another charge called tonight. This one on Taylor against Craft. Seemed like a horrible call to me.

-It would be cool if Robinson and Sullinger—both projected top-10 picks, listed at 6-10 and 6-9 respectively, both wearing 0—would go head-to-head in a sort of mini-Draft workout. Alas, it’s more like Withey/Sullinger and Robinson/Thomas.

-Ha! They just showed an old Duke pic of Christian Laettner on the jumbotron…and got resounding boos.

-After the break, Deshaun Thomas hits a three-pointer to give OSU a 24-13, lead. Pretty similar flow to first game so far, with OSU in Kentucky role and Kansas as Louisville.

-Thomas scores again to make it 26-13, followed by the quick timeout from Bill Self.

-With their team down 28-17, the Kansas faithful (the least noticeable in here thus far) try to fire up their team with the “Rock, Chalk, Jayhawk!” chant.

-Travis Releford of Kansas beats the buzzed with a lay-in to cut OSU lead to 34-25 and send Kansas into the locker room with a little bit of momentum. Still, the Jayhawks have their work cut out for them. Ohio State has looked more comfortable throughout this game.

-Kansas starts second-half with nice inside bucket by Robinson (over Sullinger) to cut lead to 34-27. After slow start, Robinson now has 10 points.

-A Releford layup brings Kansas within five (36-31) and forces Matta to call timeout. Kansas and OSU fans doing their best to keep things lively, but departures of Kentucky and Louisville fans in such a cavernous venue make it tough to keep it loud.

-Sullinger has faded as Robinson has gottten better. Jared is now just 3-12 from the floor. You can see all the game stats in our live boxscore.

-Then Johnson goes end to end and lays it in. Tie game.

-As Lang and I have discussed many times, I wish these refs would “play the advantage.” OSU would have been better off after that steal if the refs did NOT call a foul on Kansas.

-Sullinger scores on a put-back and it’s back to a five-point lead for the Buckeyes, 43-38.

-Official attendance announced as a whopping 73,361.

-We’re inside four minutes now…55-53 Ohio State. Buford leading the Buckeyes with 17 points, while Robinson has 18 for Kansas.

-Kansas’ Johnson has 4 fouls, as does Ohio State’s Thomas. Either would be a big loss.

-Elijah Johnson going to work for Kansas…gives Jayhawks 62-59 with 1:04 left.

-Traveling called on Withey gives Ohio State the ball. Bucks miss a couple threes, then Buford gets a dunk to make it 62-61, Kansas, but only 9.6 seconds remain. Time out, Ohio State.

-He makes one, misses the second, and Kansas has the ball and the win. Wow. Great job by the Jayhawks. 64-62 is your final.

-Thanks for reading everyone. We’ll keep adding Final Four-themed stories all weekend (you can always check our Final Four tag page to see them in one place) and then I’ll be back here live Monday night for Kansas-Kentucky. Can Bill Self keep Coach Cal from a title again???