Final Four: The Day After Yesterday 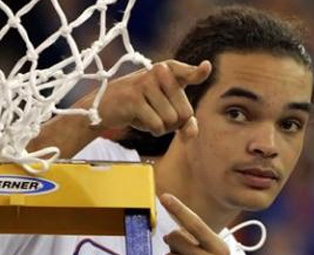 • About 24 hours ago, I attended my first Final Four. And I’ll be honest with you: It was sort of disappointing. Even though there were twice as many people there as there are at any NBA Finals game, there was a distinct lack of electricity in the building. This is probably because it’s an away game for every team involved, and the fans from all the schools are kind of sprinkled throughout the stands, with rivals sitting next to each other.

• For some reason, a lot of the fans walking around downtown Atlanta were wearing lanyards around their necks with clear envelopes at the end displaying either their ticket stubs or some kind of paperwork signaling their school affiliations. I never knew this was fashionable. If wearing credentials around your neck is cool, consider me Miles Davis.

• As I wrote in our huge recap, it was hard to get a feel for either game, and I wasn’t sure whether they were both terrible games or I was just too disconnected from the games because I was so far away from the action and, by the end of the night, worn out. Because the games were close, for the most part. But as I reflect today, my initial reaction was right: The games just weren’t very good.

• I don’t know what happened to Georgetown. They never were able to move the ball like they did all season, and Jeff Green just completely disappeared. I don’t think this was because of any great defensive plan from Ohio State, it just seemed like Georgetown didn’t want to be there at all. I was rooting for Georgetown because they usually play such a precise game. Not yesterday, though.

• As for Ohio State, I can’t figure them out at all. They have all the players necessary to be a great team, but they seem to be wildly inconsistent from game to game. If someone asked you what kind of offense they run or defense they specialize in, what would you say? There’s no clear-cut answer. Sometimes they work it inside, but usually they settle for bad jumpers from the perimeter.

• UCLA was even worse than Georgetown. Collison, Afflalo, Mbah A Moute…none of them did anything last night. Nice that they waited until the biggest game of the season to completely disintegrate. So much for them not needing Jordan Farmar.

• And then there’s Florida, who continue to play at such a high level. They were terrible in the first half last night, but still won the game going away. They can play inside, play outside, play pressure defense, do it all. I think they’re not only going to win the title, but they’ll go down as one of the best college teams of all time.

And it’s interesting how to be a great college team, you really only need about 7 players. Florida’s top five are all above average, but who else is there, besides Chris Richard and Walter Hodge off the bench? It seems obvious that the way to beat Florida would be to attack them and try to get to their bench players, but that’s probably easier said than done.

• Who’s the best coach out of these four? The obvious answer is Billy Donovan, because it’s also the correct answer. He manages his guys very well, doesn’t panic, has everyone on the same page, seems in control without seeming like one of those megalomaniacs. And if you watch closely, they run some very cool plays and cross-screens to get guys open looks, particularly Noah and Richard under the rim. I think Donovan would be a very good NBA coach, if he ever wants to give it a shot.

• Anyway, I’m moving on to an NBA city to catch up with someone for our next SLAM cover, so I won’t be posting anything tomorrow. But a friend from UGA (we actually lived across the hall from each other our freshman year and both went on to become writers) is going to pick up the torch for us and cover the Final game, and we’ll have notes here at SLAMonline.com just after the game ends.