The 6-foot guard chose the Yellow Jackets over Rutgers and Seton Hall. 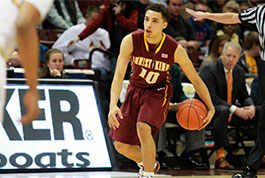 Following in the footsteps of Kenny Anderson and Stephon Marbury, 6-foot senior guard Jose Alvarado announced on Thursday that he would be taking the same journey the aforementioned former NBAers took by going from NYC to Georgia Tech for college. The highly touted guard out of NYC’s Christ the King Regional High chose the Yellow Jackets over nearby Rutgers and Seton Hall.

More from the Atlanta Journal Constitution:

Alvarado picked Tech over Rutgers and Seton Hall. Described as a ruthless competitor, Alvarado was the player of the year in the New York Catholic League as a junior last season at Christ the King in Brooklyn. ESPN rates him as the No. 32 point guard in the country.

“There are kids that win you games and kids that lose you games, and Jose just wins you games,” Andy Borman, Alvarado’s AAU coach, said in August. “He just makes plays. He’s as tough and competitive a kid as I’ve ever coached, and I’ve coached some pretty darn good players.”

“I’ve coached over 85 Division I players that have played in every conference – ACC, Pac-12, SEC, Big East,” said Borman, who was a walk-on at Duke. “Jose can play in any conference and help you win games, even in the ACC, and we all know the ACC is a monster.”