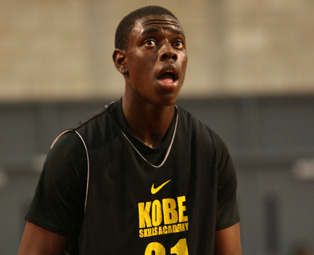 Los Angeles, CA— With the lights dimmed low, Kevin Garnett’s face appeared on the massive screen before giving out a now famous scream: “Anything is Possible!”

Those in attendance clapped as highlights of various high school athletes followed. That is how the 6th annual Gatorade High School Athlete of the Year Awards luncheon kicked off on Wednesday in Los Angeles. The first-class affair featured the 12 best high school athletes in the county in various sports, from basketball to softball.

Held across the street from the Beverly Center at the Sofitel Hotel, the luncheon was a fantastic event—much love to Josh Holland and Julie Mason of Fleishman-Hillard Public Relations for the great setup. Held in a ballroom on the second floor of the hotel, there were various tables featuring the nominees and their families as well as professional athletes such as Matt Leinart, Mia Hamm, Greg Oden, Candace Parker (accompanied by fiancé Shelden Williams), Allyson Felix. I was posted-up at the “media” table—seven men and one woman—each of us wearing an ugly “Hi, my name is” sticker on our gear.

It was quite the scene.

After decades of honoring the country’s top athletes with their Player of the Year Award, Gatorade began hosting an actual awards luncheon in 2003 in Los Angeles to coincide with the ESPY awards—each of the nominees had a chance to walk the red carpet at the ESPYS in the evening.

This year’s basketball candidates were Campbell Hall High’s (North Hollywood, CA) Jrue Holiday for the boys and Nneka Ogwumike of Cy-Fair High (Cypress, TX) for the girls. Since the inception of the award, a basketball player has taken home the honors on the male side every year except one, with winners including Lebron James, Dwight Howard, Greg Oden and last year’s winner Kevin Love. On the girl’s side, past winners include Candace Parker, Tina Charles and last year’s winner, Maya Moore.

Unfortunately for Holiday and Ogwumike, basketball was shutout this year. Quarterback Matt Barkley of Mater Dei High (Santa Ana, CA) won the honors on the boys side for his prowess on the gridiron. Chanelle Price of Easton Area High (Easton, PA) a phenomenal track star who recently competed in the 800 meters at the U.S. Olympic Team Trials, won the girls category.

Despite not winning, both Price and Ogwumike said they were honored and proud to be a part of the luncheon. “It was really overwhelming to be in the room with so many great athletes,” Price said. I found Jrue to be an exceptional young man. He was thoughtful, articulate and has great style. I’m no Andre Leon Talley, but I felt that Jrue had one of the best suits in attendance—he was clean, no doubt. Jrue said he got to spend some time with Oden at the luncheon and was excited to “see what Greg has in store for tonight. He says it will be something to see.” (And it was quite the sight later that evening at the ESPYS. To see what Jrue is talking about, peep the ESPYS airing on ESPN Sunday night).

We joked about how he was just 16 points shy of breaking Mitchell Butler’s record for most points scored in Los Angeles-area history (2,682). Jrue said he was satisfied with his high school career, leading Campbell Hall to their second straight state title. Considered by many observers as the top senior in the country, Holiday will attend UCLA next season as a member of their elite recruiting class. He said it came down to the Bruins and North Carolina, although he considered Washington, where his older brother Justin is a member of the basketball team.

“There’s Michael Jordan at Carolina and Baron Davis at UCLA,” Holiday says. “Both schools have great basketball history with great coaches and players. But it came down to being close to home. For example, I was sick on Sunday. I got to go home and have my mom take care of me. That wouldn’t have been an option if I went somewhere else.”

Jrue is already in his fourth week of summer school classes and has been lifting weights and getting acquainted with his new teammates. “We have five freshmen coming in this year and a lot is expected from us,” he says. “We’re pushing each other. Our team is all seniors and freshmen. The seniors are going to school us and give us the knowledge we need to do well We’ve been to the Final Four the past three years and are hoping to get back there.”

As far as his personal goals go for next season, Holiday told me that he’s hoping to scoop up Pac-10 defensive player of the year honors like Russell Westbrook did this past season for the Bruins. “I’ve always prided myself on my defense,” Holiday says. “I’m so competitive. I’ve always wanted to stop the other team’s best player. I love the challenge of it. The opposition’s best player is usually the one who triggers their offense.”

Can’t say enough of about this kid. Expect plenty of good things both on and off the court.

I also had the pleasure to speak with Nneka about her career and future. She had taken a break from practice with the USA women’s national U-18 team to attend the luncheon. She will fly to Argentina on Sunday with her teammates to participate in the FIBA Americas U-18 championship.

“There were 12 girls in the nation that were named to the team and I feel blessed to be a part of it,” she says. The Power forward led Cy-Fair to its first ever title this past season, with the squad winning every game with her in the lineup this year. “Winning state was very gratifying especially since we lost in overtime the year before,” she says. “The first time at state it had a Disneyland feel to it. This time around, it was business.”

Handling her business is nothing new for Nneka, who was also a standout for her volleyball team and served as student body President for Cy-Fair during her senior year. She will attend Stanford next year. Coach Tara VanDerveer is getting an exceptional young leader with serious game.

I didn’t get a chance to catch up with Oden—he was the most requested person to be interviewed at the luncheon and had a short amount of time available due to some pre-ESPY engagements. Sounds like Oden won’t really know exactly where his knee stands until September when the Blazers let him go full speed. Clearly the Blazers are being cautious and rightfully so, microfracture surgery is very serious. With most training camps set to open in October, it’s clearly uncertain that he will be ready to go when the Blazers start the season. Oden and the Blazers remain optimistic, but until he gets to scrimmage and participate in pick-up games, we won’t really know.