How To Make It As Americans Vol. 4 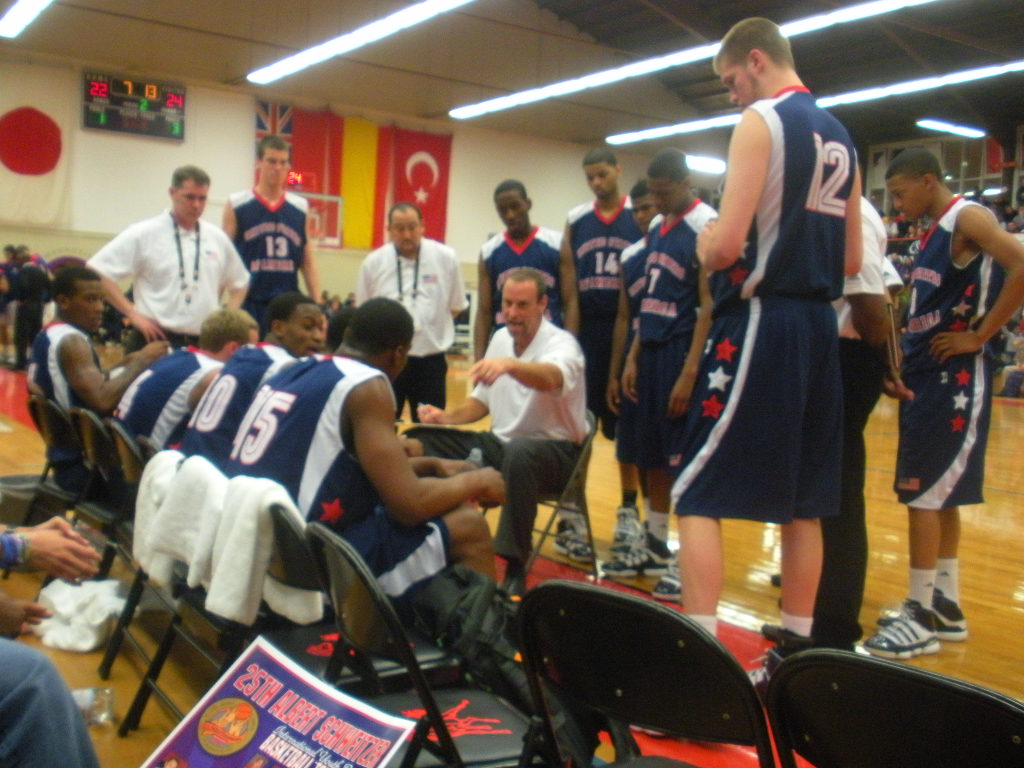 “It couldn’t have gone much worse,” Coach Krystkowiak repeats twice during the locker room at halftime. Victims of a five-point play call (yep, you read that right; we didn’t think those existed either) and poor shooting from the floor (29%), the Americans had watched a high-single digit lead evaporate  in the waning moments of the half.

Knotted at 25-apiece, the fear of being eliminated from pool play, which would make these kids spend their final three days in Deutschland competing for 9th place, felt all too real. The disturbing pattern of taking an early lead, only to give it back and start again from absolute zero at some point later in the game, was rearing its drama-building head.

The five-point play—a three-pointer followed by two shots from an off-the-ball foul—had Krystkowiak threatening to protest the game, and rightly so. There is no such thing as a five-point play in basketball, just as there’s no three-point conversion in football following a touchdown. Yay, touchdown! Let’s kick a field goal!

Even scarier, Argentina had shot just 24% in the half. If they actually connected on a few open looks, things would be even worse. Stagger action to free up shooters and cross-screens that their bigs used to free one another up were working far too well; the young Argentines just couldn’t hit Diego Maradona’s frumpish backside with a heat-seeking missile.

Despite the seemingly ominous momentum swing looming, it wasn’t to be for Argentina, who would finish at the bottom of this group of death. Ryan Boatright led a strong early charge in the third quarter, finding Chris Manhertz rolling to the rim, before a three-point play and another trip to the line helped build the lead back. The Americans took a 48-41 advantage into the fourth quarter.

Kevin Ware had a nice final frame sequence, following up his own miss, one of a few Americans to do so, before a rim-rattling dunk got the cadets out of their seats. Ware is headed to Tennessee and when he makes plays like this you can almost see Bruce Pearl’s base tan dancing jubilantly. (Note: This was Team America’s “dunkiest” performance of the tournament: Ware also had a nasty alley-oop finish earlier in the game and Marshall Plumlee’s perfectly-timed, first-half follow-up flush earned raucous applause.)

While Team USA didn’t quite step on Argentina’s throat—the South Americans specialized in chipping orange paint on a bevy of second chance opportunities in the fourth quarter—the final outcome was never really in doubt after Royce Woolridge drilled a corner three to make it 60-47 with three minutes to go.

It’s also worth mentioning that when a ridiculous call is made the ball is not lying. It’s becoming almost surreal how many bricked free throws follow blown calls.

Boatright led the Americans with 21 and 3 assists. Ware had 14 and 6 rebounds.

–Chris Manhertz decided that I look like Harry Potter. I think this is because I’m white and sometimes wear glasses. Come on, Manhertz…Malibu’s Most Wanted. Stick to the script, son. The Bronx is better than that!

–As we were leaving lunch, Ryan Boatright was gobbling up some Fruit Loops. A green one missed his mouth and dropped to the ground. I called shenanigans, noting the Fruit Loops turnover. “Yeah, but all the ones I eat are assists,” he declared.

Touche. So that’s like a 40:1 assists to Fruit Loops turnover ratio.

–I was towards the end of the lunch line with Marshall Plumlee. When the two of us approached the silverware area, there was only a solitary fork remaining.

“I’ll trade you this fork for a verbal commitment to UNC,” I chirped.

Plumlee—who would watch his brothers win a national championship for Duke later that night—did not punch me in the face, though, if we’re being honest, he would have been totally within his right.

–Coach Willis Holliday and some other guys on the team convinced me at lunch that Tyler Perry is not a government conspirator and much of his programming has value. It seems I just can’t relate to it. I guess you learn something new every day.