The NCAA is fighting to stay tax exempt 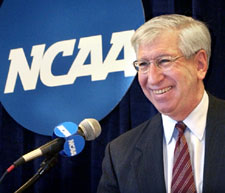 Chappelle’s Show made me chuckle. Borat made titter. But no one knows funny quite like the NCAA. Here’s the latest proof…

“NCAA president Myles Brand aggressively defended the organization’s tax-exempt status in a 25-page letter to Congress, arguing the primary goal of the NCAA is education.”

Of course. In other news, Bill Gates argues the primary goal of Microsoft is cuddling with puppies. You know what sort of organizations are supposed to be “tax-exempt”? They’re called NON-PROFITS. And here’s another one…

“Brand argued that coaches’ pay is commensurate with other highly recruited faculty members.”

Yeah. Worth noting that Rutgers football caoch Greg Schiano, in the midst of his FIRST WINNING SEASON, is the highest-paid public employee in the entire STATE of New Jersey, and I’m guessing that Coach K, Roy Williams, Bill Self, Rick Pitino and the rest of their top-level peers earn a whole lot more than the head of the chemistry department. I have no problem with this — we live in a capitalist democracy, and if the market will bear it, why not? — but it’s really rich when the NCAA tries to defend itself as being anything other than an excuse to print cash.

Regular SLAM readers are probably familiar with the fact that we tend to give the sneaker companies a little bit of a break when it comes to their allegedly evil role in basketball, especially at the grassroots and college level. Hopefully sh*t like this will serve as a reminder that we give the sneaker companies the benefit of the doubt because, if nothing else, at least they’re honest — they admit they’re in it to make money. If only Mr. Brand and his crew would do the same.

Sorry, just had to get that out. I feel better now.