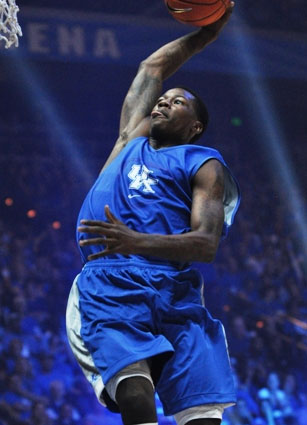 With the college basketball season right around the corner, here are some impact freshmen to keep an eye on. This isn’t an all-encompassing list of the best newcomers in the NCAA; still, each of the following players is an elite talent who will play an integral role in their team’s success this season.

Pegged as Anthony Davis’ replacement, Noel will have big shoes to fill in Lexington. Lofty expectations, sure, but not unwarranted. At 6-11 with a 7-4 wingspan, Noel is an exceptional shot blocker and, like Davis, will probably be the biggest defensive presence in college basketball.

His highlight-reel dunks and blocks will be the focal point of media attention, but there’s more to Noel’s game than just athleticism and transition play. Exceptional defensive instincts and mobility allow Noel to seamlessly help and recover, and because he’s playing on a team loaded with talent, his underrated passing skills will have a chance to shine. If Noel continues to fill out his wiry frame and can still maintain his mobility, offensive progress should come. Noel is a candidate to win National Freshman of the Year and, naturally, be a top-five pick next June.

While Noel may be the center of attention in Lexington, Archie Goodwin could play a more integral role in the team’s success this season. Goodwin, who is regarded as the best player from Arkansas since Joe Johnson, is expected to shoulder the majority of the scoring load.

At 6-5 (and still growing), Goodwin is a long combo-guard with a smooth handle, pure jumpshot and tremendous athleticism. He flourishes in transition, as he uses excellent speed to get ahead of the defense and is among the best finishers in the country.

Sources close to the Wildcats recently told me that Goodwin, through exhaustive work in the gym and weight room this summer, has improved faster than the coaching staff expected, and now Goodwin has a legitimate chance to be one-and-done. Archie is one of those guys who embraces the spotlight and thrives in crunch time, and he will have several opportunities to do so this season.

Although his eligibility is still undecided, Muhammad is too good to leave off this list. He is a special talent with uncanny scoring ability and explosiveness. Thought as the best player in the freshman class, the lefty is virtually unstoppable when he attacks the basket. He can face-up, shoot from deep, is lethal in transition and has a never-ending motor. Muhammad is a very strong defender, and when he has it going, he has the talent to dominate whomever is guarding him. If he is cleared to play this season, UCLA will have a legitimate chance to compete for a National Championship.

On a Wildcats team bringing in arguably its best recruiting class ever—Jerrett, Brandon Ashley, Kaleb Tarczewski and Gabe York—Jerrett is best prepared to play right away.

A 6-10, 220-pound stretch-4, Jerrett should make an immediate impact for the Wildcats. He’s a lanky player with great touch around the basket and range out near the three-point line. Jerrett is not an elite athlete, but with a very high basketball IQ and a crafty arsenal of moves, he’s shown enough to earn a starting spot in Sean Miller’s rotation. Considering his already-polished face up game and his ability to score with both hands, if he can put on some weight to bang down low, Jerrett will be one of the best players in the country.

The Canadian big man sent shockwaves throughout college basketball when he chose UNLV over a plethora of big-name programs. At 6-8, Bennett should be the ultimate compliment to Mike Moser in Vegas. He’s equal parts power and finesse, with the ability to bang down low and also torch from outdoors. Bennett is very explosive and has an extra burst that allows him to finish through contact. He’s matchup nightmare, with a quick first step to get around bigger defenders and the size to back down smaller ones. Potentially a future lottery pick, Bennett is a double-double machine whose game is beautiful to watch.

For all intents and purposes, Oklahoma State is Smart’s team. The 6-4 point guard arrives on campus with a great deal of hype, as he spurned schools such as Kansas, North Carolina and Texas to play in Stillwater. Smart is interchangeable on the wing, although he will most probably see the majority of his minutes at point guard, where he’s almost always a mismatch. He’s a strong, explosive talent who constantly attacks the defense and loves to get physical. Defensively, he digs in and takes serious pride in stopping his opponent. Smart should be an all-league player in the Big 12, and paired with former McDonald’s All-American Le’Bryan Nash, he’ll try to bring the Cowboys back to relevance.

What makes Calhoun special is the efficient manner in which he scores—not in terms of shooting percentage, but in terms of how he approaches the game. Equipped with great instincts and a complete skill set, Calhoun can score 20 or 25 points while playing within the constraints of an offense and letting the game come to him. He has a commanding handle, can pull-up and step-back on his jumpshot, and has a strong frame to take on bigger defenders at the rim. Calhoun scored 44 points in UConn’s two exhibition games, earning him a spot in the starting lineup.

On defense, Calhoun is a tenacious defender who takes the game personally. He’s a warrior, always giving 110 percent and leaving it all out on the floor, which perfectly fits the culture Kevin Ollie is trying to establish. With a freshman year to get acclimated to the Big East, Calhoun will be ready to lead the Huskies when they are again eligible for postseason play.

Harris, who turned 18 in September, has a chance to be a star in the Big Ten. A defensive monster, Tom Izzo recently said Harris is “one of the best defensive guards I’ve had since Charlie Bell,” and called Harris “one of the smartest players I’ve ever coached.” Not too shabby.

A 6-4 shooting guard, Harris can create his shot off the dribble, and is an adept slasher. He has soft touch on his jumper and constantly puts pressure on the defense, as he loves to attack the rim. With broad shoulders and a big frame, Harris is an all-around force. The backcourt of Harris and Keith Appling will be one of the most aggressive in the country.

In a loaded Pac-12, the Ducks are relying on Artis to be their floor general and lead the team back near the top of the conference. Head Coach Dana Altman has handed Artis the keys to the team, hoping the former Findlay Prep standout will help end a four-year NCAA Tournament drought.

Although he is only 6-foot, Artis has the tools to be an elite point guard. He possesses a tight handle, reliable floater and three-point shot. He’s been in the weight room all summer, which enables him to do work once he gets in the paint. Constantly overlooked—literally and figuratively—because of his size, Artis has an immense chip on his shoulder, and a certain Oakland toughness that has carried him to this point. As the season progresses, he should emerge as one of the best young players in the Pac-12.

Anderson is one of the most unique players in college basketball. A 6-9 point forward, the UCLA freshman can play all three perimeter positions. With elite court vision, ball-handling skills and an ahead-of-his-time feel for the game, he thrives on setting up his teammates. He’s a matchup nightmare on both ends because he can score from anywhere, and at 6-9 he towers over most point guards. Anderson’s not the most athletic player in terms of jumping ability, but he plays under control—in high school, Anderson was dubbed “Zero Miles Per Hour” because of his slow-and-steady approach—and he can set, and dominate, the tempo of a game.