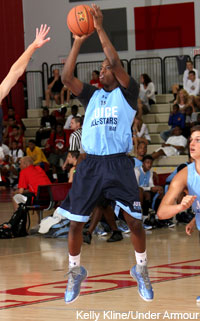 Class of 2014 guard Isaiah Whitehead has already begun to establish himself as one of New York City’s best players as a member of famed Abraham Lincoln High School in Brooklyn.

He’s also made a name for himself as one of the best in the country, something he envisioned for himself a few years ago.

“It was probably seventh grade,” Whitehead remembered. “I was playing at nationals and doing really good. I had a couple 30-point games, so I was like, If I’m out here at nationals playing against all these guys scoring 30, I think I can do it anywhere.”

Playing against top prospects a year older with the Juice All-Stars 17-and-under team at the Under Armour Championship Series Summer Jam presented by NY2LA Sports, Whitehead announced his arrival with a 31-point outburst in his first game on Wednesday.

In front of hundreds of Division I college coaches, the 6-4 combo guard put his dynamic scoring ability on display throughout the five-day event. Possessing a linebacker’s upper body, slick handle and good athleticism, Whitehead got into the lane and finished in a variety of ways.

His advanced mid-range game was also on full display—including a variety of pull-ups, runners and floaters. Continuing to extend his range and knock-down shots with more consistency, he tested himself against the best in the country—many of which may be gunning for him after seeing his name as a consensus top-40 prospect in the Class of 2014.

“It just makes me go hard every play,” Whitehead said. “Everyone is defending me hard. I just try and stay level headed, and play my game.”

“I play with these guys every day,” Whitehead said. “They’re all from my neighborhood. So I play against them every day and I know their games. They know my game. So we just try and come out here and try to compete.

“When my team needs a basket I try to score and if they need me to pass, I try to pass. Whatever they need I’m going to try and give to them.”

As is the case with big-time prospects out of the Big Apple, the hype will grow as well. Natonal Recruiting Analyst for Scout, Evan Daniels, has Whitehead ranked No. 31 in his class but cautions fans from comparing him to his highly publicized predecessors from Lincoln such as Stephon Marbury, Sebastian Telfair and Lance Stephenson.

Across the bay, Linden New Jersey native Quadri Moore established himself as one of the best Class of 2014 big men in attendance at the Summer Jam and helped Sports U Team Izod reach the elite eight in the loaded 16-and-under division.

Standing 6-8 with an imposing frame, Moore was a force in the paint on both ends of the floor. He displayed the ability to finish with either hand around the basket, but more impressively knocked down shots with regularity all the way out to behind the three-point arc.

“Recently I’ve worked harder on my perimeter [game],” Moore said. “It gives me more versatility instead of just being one dimensional. I feel like I can guard any position from 3 to 5, but I need to work more on my perimeter defense and moving my feet more.”

He looks to be on track to becoming one of the country’s top power forward prospects, and already has offers from Rutgers, Georgetown, St. Joe’s, Seton Hall, Providence and Cincinnati. Ranked in the top 100 by all services, Moore has enjoyed seeing his stock rise and the high major offers start to pour in.

“It means a lot to me,” Moore said. “At the next level, I want to improve myself and be a big time college basketball player and maybe go to the NBA.”

Besides Whitehead and Moore, the east was well represented all tournament. Sports U Team Izod’s 17’s captured the platinum division championship with a win over the Illinois Wolves behind the St. Anthony backcourt of Josh Brown and Hallice Cooke—both of whom had coaches from BCS conferences tracking their every move.