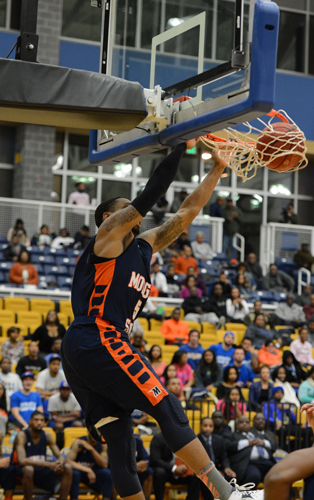 A bad pass, a steal, a sprint down the court, and a pretty finish. Whether a lob to his big fella or a fancy dunk for his own stat sheet, with all the proper or improper opponents’ reactions along the way—that’s Morgan State’s Justin Black’s favorite part of the game.

“I love fastbreaks, making different moves, making people react to you, seeing them react the wrong way,” he said.

“Sometimes you get in the groove and you go right into the media, kinda slow down a little bit. You need ‘em too for rest, so I guess they’re all right.”

One thing Black can be 100 percent sure of—no guessing necessary—is his scoring ability. The 6-2 starting senior guard leads his Bears with 19.1 points per game, while also grabbing 5.2 boards, snatching 2 steals and dishing out 2.7 assists.

“My strength is definitely scoring the ball. I feel like I can score on anybody,” he said, fresh off a 23-point performance against Coppin State and before a 24-point game versus Maryland-Eastern Shore this past weekend.

Black nearly tripled his scoring average from 7.1 his freshman year. He recorded multiple 20-plus point games, including a thriller overtime win last season against Savannah State in the Mid-Eastern Athletic Conference tournament, what Black considers one of his most memorable moments on the court so far.

“At that point you’re just playing the foul game, but I hit a big three,” Black said. Within one, the Tigers’ Rashad Hassan dunked to put Black and the Bears down by three again, with less than a minute left.

Black hit another three to tie it up and take the game into overtime, then sealed the deal with a go-ahead three to win it.

While the victory was one of his best moments, the tournament overall resulted in a loss. Coming up short by less than five points in two Championship games the past three years left the story for Black and his senior comrades unfinished.

“To be an elite player, fully, you have to have a ring. People were gonna give LeBron hell forever if he didn’t get a ring,” said Black.

“For me, Anthony [Hubbard], Ian [Chiles] and the other seniors on the team, the whole goal is to win a ring. That’s the only thing I want to come out here with. The accolades you know, they’re gonna come whenever they come—but the ring is the big picture.”

The hunger for the championship, getting snubbed for individual awards last year, and encouragement from his coach Todd Bozeman and DeMatha high school teammate, Victor Oladipo, motivate Black night in and out.

“He (Oladipo) says, ‘You know, you could play at this level with me,’ and hearing that from him, ‘cause he’s in the League, it just means a lot,” Black said.

At the stacked DeMatha High School, Black didn’t get as much buzz as other players.

“Coming out of there, and coming to a mid-major, I just wanted to grind and prove that I belong. One of the top players in the country,” he said.

With each game, that’s exactly what Justin Black does. Previous to this year, he came into the seasons mostly as a scorer. With a push from Coach Bozeman, Black made his game more of a package.

Black, along with 7-2 center Ian Chiles and “rebounding machine” Anthony Hubbard complete the puzzle at Morgan State to go on what they hope will be an amazing run to reach the NCAA Tourney next month.

Then beyond senior year, Black has big plans.

Improve ball handles, accurate passes, limit turnovers and strengthen defense. Whether straight to the NBA or the “Gary Neal route” for his own pro career, followed by a coaching or analyst’s job to put that media broadcasting major to use—that’s Morgan State’s Justin Black’s plan for the future. 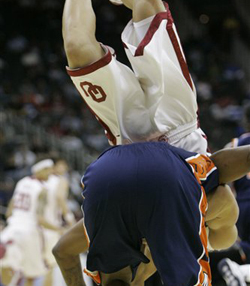