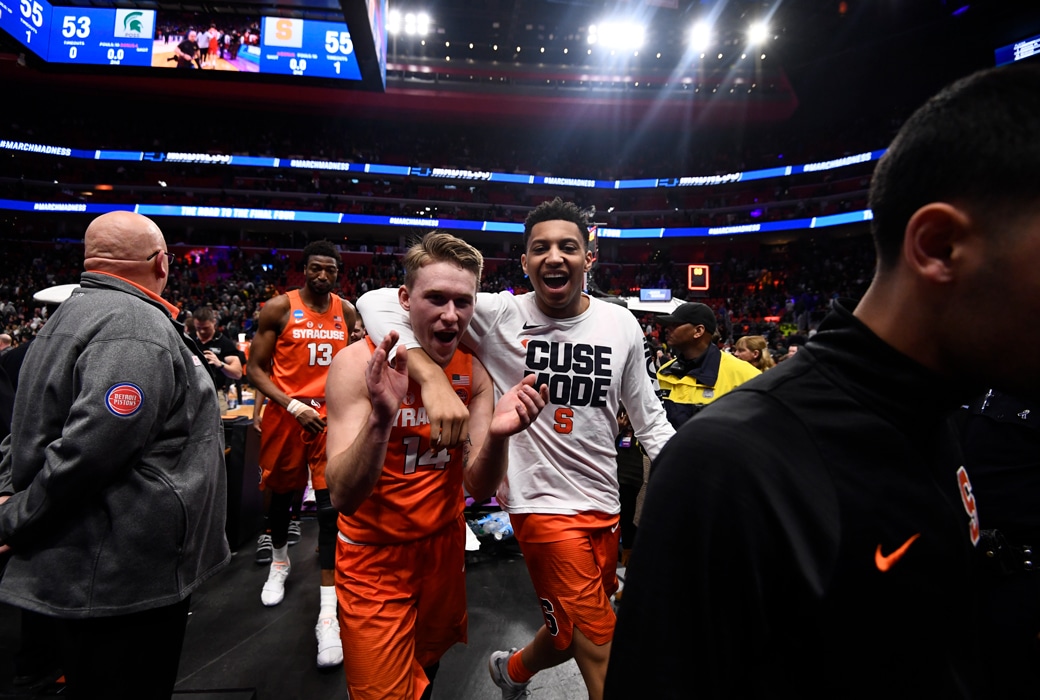 Upsets have been the name of the game so far in the NCAA tournament. With the regionals set to begin Thursday, there are two No. 1 seeds and two No. 2 seeds left and one corner of the bracket where the highest seed is a No. 5. All of those upsets have translated to fantastic games – and high ticket prices.

The hottest ticket for a regional on the secondary market is in the Midwest, a bracket that features No. 1 Kansas, No. 2 Duke, No. 5 Clemson, and No. 11 Syracuse – which reached the Field of 64 by winning a play-in game at the First Four. The combination of three past national champions and Omaha’s proximity to Lawrence, Kan., home of the Jayhawks, has made prices soar. According to TicketIQ.com, a secondary marketplace with data from hundreds of secondary sites, including the official NCAA ticket exchange, powered by PrimeSport, the average asking price for a seat in Omaha is $631. The regional is the second most expensive of the decade behind last year’s Midwest Regional (held in Kansas City), which settled at $652.

Overall, the average asking price on the secondary market for all four regionals is $432, making this year the second most expensive since TicketIQ.com began tracking data in 2011. Last year’s all-regional average of $465 was the highest.

TicketIQ.com data shows the average asking price on the secondary market for the Final Four is $804 and the national championship is $627. Prices for those events tend to creep up as the field becomes set.  And Texas A&M, just a three-hour drive to San Antonio’s Alamodome, is still alive. Should it advance out of the West Regional, ticket prices for the Final Four – March 31 and April 1 in San Antonio – will most certainly rise.

Tickets for all the regionals are available from Primesport, the host of the NCAA’s Official Ticket Exchange, where fans can buy and sell tickets for any round. The company also has a series of packages for the Final Four that include tickets and special access areas during the Final Four weekend in San Antonio. Final Four tickets on the Exchange begin at $245.

For fans of any school looking for a premium experience, PrimeSport offers a range VIP Experiences, that allow fans the opportunity to see all three games, along with free food and drinks at the Official Pregame NCAA VIP Experience at the San Antonio Convention Center, a 10-minute trip to AT&T Center. PrimeSport’s VIP Experiences are almost sold out.

The Official Pregame NCAA VIP Experience will have live music, celebrity appearances by Seth Davis and former Spur Sean Elliott.  The VIP Experience will be open on Saturday, March 31 from 12:30 p.m.-3:30 p.m. and Monday, April 2 from 3:30 p.m.-6:30 p.m.

If that’s not VIP enough, the Courtside Club package, available to certain ticket types, provides an open bar and endless food. The package also comes with a “Chalk Talk” with yet-to-be named NCAA coaches, and time for some selfies with the Final Four trophy.  Perhaps most impressive, some PrimeSport packages are actually less expensive than the same ticket on StubHub, without any of the food or access.

For companies that are looking to go to the next level, PrimeSport also has private suites available. These suites include a behind-the-scenes tour, an on-court photo, front-row seating at practice and even a locker room tour. Regardless of who has their “One Shining Moment” on the court, that would be a Final Four for the ages.

Below is a look at each of the regionals, including most recent ticket prices on the secondary market.

In the South Region, the highest seed still remaining is No. 5 Kentucky, after Virginia became the first No. 1 seed in tournament history to be knocked off by a No. 16 seed. This bracket will be the toughest to predict, with relative unknowns Loyola-Chicago and Nevada still alive and Kentucky playing Kansas State on Thursday. This regional is the least expensive of the four and as of Monday, there were still more than 6,500 tickets still available on the secondary market.

Ticket prices for this regional have been rising despite No. 1 Xavier being bounced out of the tournament by No. 9 Florida State in the Round of 32. The “local” favorite will be Gonzaga, the West Coast’s adopted team from Spokane. The Zags, a No. 4 seed, are the second-highest seed remaining in the bracket behind No. 3 Michigan. Ticket prices for this regional, which starts Thursday at Staples Center, are the second most expensive behind the Midwest and, as of Monday, just under 1,700 tickets remained available on the secondary market.

One of only two brackets with both the No. 1 (Kansas) and No. 2 (Duke) seeds still playing, the Midwest’s most exciting game may not be Kansas-Clemson, but Syracuse-Duke. Both teams have plenty of post-season experience and Syracuse, which got an at-large bid and has already played three games to get to this point, is surely ready to continue with the upsets. Clemson is the only team in the field that has never won a national championship. Availability of tickets on the secondary market is very limited – 552 as of Monday – and prices are still climbing. Games in this bracket start on Friday.

With less than 1,000 tickets left for Friday’s regional semifinals, the East Regional is the other bracket with both the No. 1 (Villanova) and No. 2 (Purdue) seeds remaining. In terms of geography, the closest team is Villanova, based about six hours south in Philadelphia. It’s been six years since sports-crazy Boston has hosted an NCAA regional.