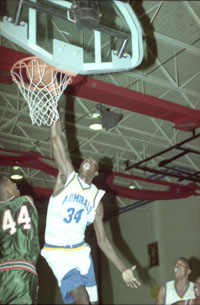 Bob Gibbons has seen a lot of high school basketball. And by a lot, I mean more than pretty much anybody. For the past 32 years, he’s been roaming the country in search of prep talent, writing up countless players for his All Star Report. Gibbons runs his own respected tournaments and is on the selection committee for the annual McDonald’s All-American Game. He has seen thousands of players; two stand out above the rest. One, of course, is LeBron James. The other is Kevin Garnett. “I probably saw him before any of the so-called national recruiters did,” Gibbons recalls. “And it was almost by chance.” It’s a good story, so I’ll just let him tell it.

“A coach named Jimmy Williams, who’s now at Oklahoma State, was at Nebraska then,” Gibbons says. “He had called me—they were looking for a big guy. And I told him that there was a kid in Blacksburg, South Carolina, Mikki Moore, who I thought was being under-recruited. So Jimmy flew to Charlotte, came to Lenoir where I lived, and we drove to Blacksburg and watched Mikki Moore practice that afternoon.

“It so happened that Blacksburg was not playing that night. And we were looking for a game to go to, since we were in the area, and I told him I hear there’s a kid named Garnett down at Mauldin that’s supposed to be good. I think he’s a junior. And we go down and meet the coach and he says, ‘No, Kevin is only a sophomore.’ We sit there and watch him play—and Jimmy had been at Minnesota when they had Mychal Thompson and Kevin McHale, and Jimmy was a specialist in big guys, and this kid was doing everything. I mean, he was 6-9, he was handling the ball, he was making outside shots, he was dunking over people, he was blocking shots. Jimmy said, ‘Bob, that’s as good a young player as I’ve ever seen,’ and I agreed with him.”

Gibbons, who was also in charge of selecting players for the Nike All-America Camp at the time, offered Garnett an invitation on the spot—on the condition that he improve his schoolwork. Garnett kept his end of the bargain and played in Indianapolis that summer.

“Garnett was the best player in the camp, regardless of age,” Gibbons says, “and certainly the most impressive.” The secret was out.

The high school basketball landscape in the early ’90s was a very different place. College was a given for top players, and, without the internet, news traveled slowly. Even those closest to the players didn’t necessarily know what they had.

The varsity coach at Mauldin was James “Duke” Fisher, who had played freshman ball at North Carolina in the early ’60s. “The first time I saw Kevin, he was a freshman,” Fisher says. “Our JV coach told me about him. He had good hands, good feet, knew his way around the court. He was 6-6, 6-7. He was out there just practicing. I didn’t know anything about him until that point.”

It didn’t take long for Fisher to figure it out. “I took him up as soon as I saw him working out,” the coach remembers. “He started after the sixth or seventh game. He wasn’t a great offensive player his freshman year, even though he averaged 15 points. He could’ve been more aggressive, but I guess it was because he was just there.”

What Garnett did do from the start was play defense. With his long body and uncanny sense of timing, he was a natural. “We play man to man,” Fisher says. “We’re gonna play defense. And you don’t play defense, you don’t play. And he picked it up, he loved it. He averaged seven blocks a game all three years he played for me. He did that right away. He was good on the rebounds, he had good floor sense. He had stuff that you don’t teach.”

And for the rest, he had Fisher. Although he only played the one year at UNC, and that was when Frank McGuire was the coach, Fisher had become a Dean Smith disciple. He preached the Ds—discipline and defense—and Garnett was a quick study in both.

“I’ve said this many a time, and I’ll tell you,” Fisher says. “I could teach him a drill in practice—and I’m a drill coach—and he could teach it the next day at practice. He got that good. He was a very good practice player. ‘Yessir,’ ‘nosir,’ busted his butt—and when I was pretty tough on him he’d go to the park and play basketball after practice was over with. He can’t walk into a gym without picking up a basketball. He’s just dedicated to the game of basketball.”
As a sophomore the following season, KG added more offense to his game, becoming more confident and even more well-rounded. Not that he had far to go. “The thing about Kevin, he is a team player,” Fisher says. “He gives it off, and—he likes to score, everybody likes that—but he doesn’t care, as long as you win. And he’s a tremendous passer. A guy from Sports Illustrated asked us, ‘What’s the one thing you can say about him that’s really remarkable?’ And I mean, he does everything well, but he’s one of the best passers I’ve ever coached.”

Gibbons, who saw him for the first time midway through that year, concurs. “The thing that separated him was, despite his height, he could play any position on the court,” Gibbons says. “He literally could bring the ball up as the point guard—not that you’d want him to, but I saw him in games, key games, when they were pressing the point guard, they’d just throw it to Kevin, the big man would come guard him, and if they double-teamed, he would pass it off to a teammate. He just had a great sense and remarkable court vision for a player his size. He knew how to play, and it just seemed to come to him naturally.

“I think Duke Fisher was a great influence on him,” Gibbons goes on. “He prepared him well in the fundamentals. Unlike kids today, who want to do the showy, flashy things—and why we get our butts beat by the international players—Kevin understood and had the basics, which separated him from a lot of his peers even at an early age.”

Before Garnett arrived on the scene, Mauldin’s record for wins was 10—they’d never even had a winning season. That year, the Mavericks won 19 games, making it all the way to the state’s final four. That summer, he exploded. He played huge at the Beach Ball Classic—dropping 40 in a quadruple-overtime win. Not that he was happy about it. “He didn’t like it because I told him the ball’s going inside—we just take our time, stick it inside,” Fisher says. “And he said, ‘Coach, ain’t nobody else shootin’!’ I said, ain’t nobody else gonna be shootin’!” Fisher laughs. “He got up for big games. He made everybody else play to a different level. Everybody, I think, played better when he was in there.”

Then came Nike Camp—where, despite the presence of Allen Iverson, Garnett was the best player. And his confidence grew even more. As a junior, he averaged 28.5 points, 18.5 boards, and his usual seven blocks, leading Mauldin to 24 wins and, once again, the state final four. He was named Mr. Basketball for the state of South Carolina.

But an incident at Mauldin marred what was otherwise a tremendous season. Garnett, along with several other students, was accused of attacking another student in the hallway, breaking his ankle. “I don’t know actually what happened,” Fisher says. “He probably was just around like they say, and they saw him since he stood out, and they were gonna get whoever they could get a hold of. I hated that, but it just, you know…it was just a bad situation he got caught up in.”

All the charges were eventually dropped, and Garnett’s record stayed clean, but that was the end for him at Mauldin. The previous summer, at Nike Camp, he’d been coached by William “Wolf” Nelson, and Nelson had stayed in touch with Kevin and his mom, Shirley Irby. Garnett had also befriended a high-flying wing named Ronnie Fields, who played for Nelson at Chicago’s Farragut Academy. And that summer, at Nike Camp, Garnett decided he would join them.

Fisher was disappointed—“We would have won state if I’d had him”—but not particularly surprised. “I thought that after his sophomore year he was thinkin’ about going to—what is it, Oak Ridge…Oak Hill. Or what’s the other one up there, Fork Union or something, I don’t know. He was thinking about going to one of those.”

Instead, Garnett moved on to Farragut, where he would average 25.2 points, 17.9 rebounds, 6.7 assists and 6.5 blocks per game while shooting 67 percent from the floor and leading Farragut to a 28-2 record and the Chicago city title. He was named Mr. Basketball of the state of Illinois—and was finally on everybody’s radar. “The big thing that really came to the surface in Chicago was his competitive nature,” says recruiting expert Van Coleman. “He absolutely refused to lose, he was so unselfish, making his teammates better with his ability to create opportunities for them, in almost point guard fashion.”

“He had the natural instincts,” Gibbons says, “a tremendous feel for the game, and he was well-schooled and prepared and understood how to play. And he didn’t try to do things that he shouldn’t do. I see too much of that in today’s players.”

At Farragut, Garnett not only faced better competition, he faced it with better teammates. Nothing against Mauldin, but basketball was different in the big city. Most notably, he finally had a teammate who could keep up and take some of the pressure off. “Having a guy like Ronnie Fields, he was not the only guy like he was at Mauldin,” Gibbons says. “They had more talent, so they utilized Kevin more as an inside player, where at Mauldin they used him everywhere. He could play inside or out.”

Still, there was no question who the man was. “When the game was on the line, he was the guy you wanted to handle the ball and make the big basket,” Coleman says. “They weren’t in many close ones, but when they were, Garnett was the difference maker.”

He earned all the possible accolades: All-American awards, MOP of the McDonald’s Game, two Mr. Basketballs. And, despite his own protests to the contrary, Fisher was the one who sent him on his way. “We didn’t do much for him—he had all the ability,” Fisher says. “We just gave him a chance. You can teach all the drills and everything, but you get better by playing against good competition.”

Which is all well and good, but someone had to channel that talent, nurture it and make it grow. Farragut may have prepared Kevin Garnett for the pros, but it was Fisher and Mauldin who prepared him for Farragut. And Gibbons, with a chance trip, was the one who introduced him to the world.

“The main purpose of the trip was to go with Jimmy Williams to help him find his way to Blacksburg, and to see Mikki Moore myself,” Gibbons says. “We went to see Kevin Garnett just as an afterthought—here’s a kid who I thought was a grade higher than he really was, but it was a godsend that we went.
“He always played hard with great intensity, no nonsense, not a showboat guy, just really talented, and it stood out. He was just so gifted, and had a great sense of timing in whatever he did. He just had sort of God-given instincts. He had a complete game.”