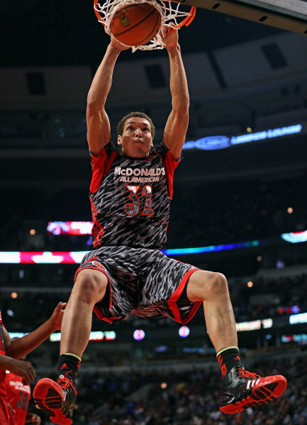 How’s it going, everyone? I’m in Chicago for the McDonald’s All-American games. Last time I was here was two seasons ago when most of the country was first introduced to a local kid named Anthony Davis. The other boys on the floor weren’t too bad either, as the game featured Michael Kidd-Gilchrist, Cody Zeller, Michael Carter-Williams and Bradley Beal. If this year’s crop is even half as talented as that one, we’re going to have one heck of a show at the United Center.

Just like two years ago, the focus is on a local kid—Jabari Parker. The Simeon product just shared our SLAM 167 cover with Andrew Wiggins, a couple of players who have seen their hype grow to Lebron James levels. Watching Parker, who is on the West team, and Wiggins, who is on the East team, go head-to-head should be the highlight of the evening.

But those aren’t the only two players to keep your eye on. Joining Parker on the West squad will be Aaron Gordon, who just committed to Arizona this week, and the Harrison twins, Aaron and Andrew, who will be lacing it up for Kentucky next season. Meanwhile, the Harrisons’ future teammate, Julius Randle, might steal the show from Wiggins on the East team.

Before the boys got started, it was the girls’ turn to take the floor. After trailing briefly at 2-0, the West team took the lead and never got it back, finishing with an easy 92-64 victory.  Mercedes Russell showed why she’s the nation’s top recruit by finishing with 16 points and 12 rebounds for the West. Meanwhile, her future teammate at Tennessee, Jordan Reynolds, had 10 points and 11 rebounds.

Boys game is coming up in about 30 minutes, so keep it locked here for tip.

Okay…I’m back at my seat. I just got some great pictures of the players getting ready to come up, including some amazing shots of Jabari Parker. Check it out on my Twitter: @dcassilo.

9:38 p.m.: Well we have our first highlight reel play of the night as Aaron Harrison throws down an alley-oop from his brother, Andrew. Next trip down, Andrew gets a bucket of his own. There’s two reasons Kentucky might have the best class since the Fab Five.

9:42 p.m.: West holds an 11-6 lead right now. If you’re looking for Wiggins and Parker, they are both wearing No. 22. Wiggins has 2 points and Parker is scoreless so far.

9:44 p.m.: Aaron Gordon is having a heck of week so far. He announced he was attending Arizona, and he’s had a couple of thunderous slam dunks. Looking like an early pick to steal the MVP from Parker or Wiggins…17-8 West.

9:48 p.m.: After the TV timeout, both Parker and Wiggins take a seat, so use this time to get to know the rest of these great players.

9:53 p.m.: Second TV timeout, and the West leads 20-13. One player that has really impressed so far is Anthony Barber. The NC State-bound point guard is a great with the ball in his hands, and he’s had plenty of moves that have excited the crowd.

9:58 p.m.: It doesn’t seem like Wiggins has done a lot, but he quietly has six points and two steals. Meanwhile, he’s locking down defensively on Parker.

10:00 p.m.: A three-pointer from Wayne Selden Jr. ties the game at 22. It’s pretty clear that we’re in for a much better game than the girls’ game was.

10:01 p.m.: Parker gets his first basket of the night, but he also fouls Wiggins. It’s his second foul of the night. Has anyone ever fouled out of this game?

10:05 p.m.: A couple of observations as the West hold a 34-30 lead. 1) It’s extremely difficult to see the uniform numbers on these new jerseys. 2) Unlike recent years, there isn’t a player in this class that has the same skill set as Anthony Davis and Nerlens Noel.

10:10 p.m.: Inbounds alley-oop to Jarell Martin is the early candidate for play of the night. Gordon and his 12 points, leading the way for MVP.

10:15 p.m.: It cannot be understated how good Kentucky will be next season. Every player they have in this game has done something impressive tonight, and it’s hard for me to pick who I like the most. Don’t forget Alex Poythress and Kyle Wiltjer are still around.

10:21 p.m.: Gordon might finish with the most points in this game, but Wiggins has been the best player so far. He’s incredibly patient and good things happen whenever he’s around the ball. Just threw down a two-handed jam, but his East squad trails 55-42.

10:23 p.m.: Right before half, Randle has a pretty reverse alley-oop. With all of this Parker and Wiggins talk, he’s been the forgotten man this season. As we hit halftime, the West leads 56-44. Gordon leads all scorers with 14 points, while Wiggins has 12 points for the East. Be back in 15 minutes for the second half.

10:48 p.m.: In addition to Barber, another guy who has impressed is Martin. He has some great athleticism, and he is yet another solid building block at LSU.

10:55 p.m.: Another fastbreak huge slam for Gordon. If Gordon winds up winning MVP, it will be very reminiscent of when I was here in 2011, and James Michael McAdoo got the honor. West leads 74-54.

10:58 p.m.: Our chances of a good game here seem to be fleeting, as the West is up 20 points. As hope we get a lot of highlight worthy plays over the last 10 minutes to salvage this.

11:09 p.m.: A dunk by Keith Frazier cuts the West lead down to 11 points, which is the closest it’s been in quite some time. Perhaps we can still have a game here.

11:17 p.m.: A fastbreak layup for Demetrius Jackson cuts the West lead to six points, then a dunk by Dakari Johnson makes its 94-90. We have a game!

11:26 p.m.: They didn’t result in anything, but Gordon just had a couple of pretty passes. He can do everything well for a man his size.

11:28 p.m.: Gordon just capped off a monster night with a devastating slam dunk. He’s at 24 points and 8 rebounds and checks out of the game. Ladies and gentleman, your MVP.

11:29 p.m.: West leads by 9 points here with less than a minute to go. I’m going to head down so I can get there in time for interviews. This was a fun night. Hope you had a good time!