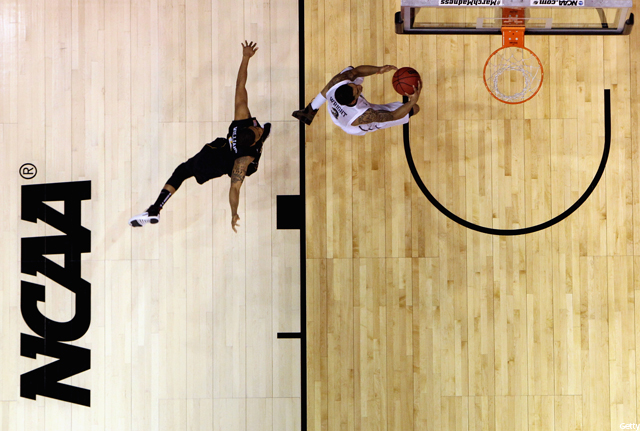 One person’s shadow is another person’s shade. If you are part of the NCAA’s power structure, kicking back in your $35-million Indianapolis compound, an ominous shadow is spreading over March Madness. A shadow expands over a tournament that brings in 90 percent of the NCAA’s $777 million in revenue. A shadow is spreading over a season of super freshmen, fantastic finishes and the bracketology that represents the most gambled upon sporting event in the United States, greater than even the Super Bowl. That shadow emanates from Northwestern University, where the football team, led by quarterback Kain Colter, has decided that the only way to extract fairness from the NCAA, is to organize. As Colter said, “Right now the NCAA is like a dictatorship. No one represents us in negotiations. The only way things are going to change is if players have a union.” Their coach Pat Fitzgerald has even supported their efforts saying, “Kain and our student-athletes have followed their beliefs with great passion and courage. I’m incredibly proud of our young men! GO CATS!”

Forget for a moment the fact that the entire phrase “student-athlete” is a legal fiction, devised by the NCAA in the 1950s to avoid paying worker’s compensation to the widow of a football player, Ray Dennison, who died on the field of play. Remy says “student-athletes are not employees.” That would be news to the college basketball players who put their entire month of March on hold just to be able to make sure that the NCAA gets 90 percent of its yearly revenue. That would be news to the players at Louisville who, according to Forbes, pull $23.2 million in profit for the school every year. That money is above and beyond Coach Rick Pitino’s $42 million contract, which runs through the next decade. This is money made not only through the program’s success, but also a new arena, and the various corporate brands affixed to Cardinal uniforms like they are all just cars in the Winston Cup series. If the car breaks down, like Kevin Ware last year when his leg shattered in the NCAA Tournament, your school might even try to sell a commemorative, motivational t-shirt. No t-shirt money would go to you, although any hospital bills later in your life will be more than enough of a souvenir for you to handle.

One person’s shadow is another person’s shade. The shade is the specter of relief for the players who are, at best, athlete-students, with few options to study or even pay attention to anything that distracts their tunnel vision from the Madness of March. The actions of the Northwestern players are historic because they are the first group of “student-athletes” to stand together and say that this kind of tunnel vision demands introspection, reflection and critical analysis.

In other words, they are behaving exactly like exemplars of what a college student is supposed to learn how to do. They were even inspired from, heaven forbid, an actual class several of the players were taking on labor law. This would be the ultimate irony for the iron-fisted despots at the NCAA: if their insistence on the fiction of “student-athletes” propelled some students to take their classes seriously and use those tools to finally earn, for all athletes, a long-overdue seat at the table. For every NCAA basketball player this March, the shadow cast by the Northwestern Wildcats is potential shade. This shade carries the promise of relief from the overheated pressures of the Tournament and the possibility of bringing a measure of sanity to the madness of March.