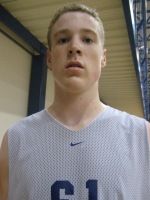 Over the past three months SLAM Online has given you the scoops on some of the countries most heralded high school hoopers. Whether it’s the Nike Skills Academy or the acclaimed Reebok U. camps, many players have paved their ways into headlines this summer. With our Boston correspondent Sammy Newman-Beck attending the Reebok Sponsored, New England Top 75 camp last week he decided to give the New England area a little love and make his own list of New England’s top young gunners.

Nate was by far one of the top players in camp. He is 6’8 but with two years left may grow a couple more inches. He is a very athletic big man but can play on the outside. May even be able to play the small forward position at a big time school. Needs to work on his shooting form to make his shot more consistent. Has great leaping ability as well. Rumor has it big time schools such as Boston College, Duke, Georgetown and Notre Dame have shown interest.

The Boston native had a slow start to the morning. He is a strong big man. Didn’t get the ball enough in the early parts of the day, but seems to know how to play. Good leaping ability, and has a good feel of the game. Plays hard. He really made an impact in the veteran/rookie all star game where he faced off against UConn big man Jeff Adrien (Brookline High School). Oriakhi scored almost at will and held his own against UConn’s starting 4 man.

Oriakhi has committed to UCONN.

A miniature version of the white Shaq’. He is about 7’0, 350 lbs. Dunked almost every time he could. He is out of shape but no one could even attempt to stop him when he got the ball. In one sequence he dunked four times in a row. Needs to get in better shape, but I’m sure that will come in college. He has committed to the University of Rhode Island.

Another Boston native who will team with Oriakhi at Tilton this fall. Coombs has some of the best talent out of the group, however he seems to coast at times. It seems that he can score whenever he wants and dominate in the same fashion. Now he just has to work at doing that all the time. Has a pretty good shot and just is determined to score when he decides to. Could improve his defense. Coombs has also committed to UCONN.

Solid PG. Knows how to play the game. More of a scoring guard but knows what to do with the ball when. Great scorer and plays hard on both ends. On the offensive end he tends to settle for deep jumpers at times, but can also hit them as well. Prescott will take his talents to St. Josephs University next fall.

Excellent decision maker and can run a team as good as any PG I have seen recently. A bit small, but is great at changing speed and direction and getting to the hoop. A great passer as well, always seemed to get the ball to the right person at the right time. Great catch for the University of Rhode Island.

Ben has tons of potential. While his footwork is not great, his touch around the hoop is unbelievable. It seemed as though every hook shot and shot around the hoop he took went in. A large body big man who will get scooped up by a big time program.

Tucker is a 3 point shooter. Tall for his position, I believe he can play a 3 at a big time school. Is a good shooter and has decent athleticisim. In order for him to be a great player on a bigger level he will want to gain a little speed on the defensive end. But overall I think one of the best all around players. I have heard Boston College is on his trail.

The Worcester, Mass native is one of the top PG’s in his class in New England. He is young, but can handle pressure and has a veteran presence on the court as if he was a senior. He is small and skinny, but that will improve over the next couple of years. Is a leader on the court, a pass first PG and seems like an overall nice kid. An early list of interested schools include: Boston College, UConn, Oklahoma, Penn St. and Purdue.

The Boston native is a hard nosed guard. After playing in the Boston City League for 4 years he will head to ND Prep next year hoping to get a mid-major divison one offer. He plays extremely hard and has a way of getting to the hoop. Needs to work on his jump shot. Should get a mid-major offer after this year.

The athletic guard is a hard worker. He had a great way of getting by people and getting to the cup. His athleticism surprised all. Didn’t get to see too much of his jump shot but when I did it seemed good enough. Gibbs has committed to the University of Massachusetts.

Sleepers from the day:

The PG who stars at one of the best programs in RI is a young stud. He is able to penetrate with both hands and can see the court. Look for him to make some noise in the next two years.

A big man loaded with potential. Very aggressive and played extremely hard throughout the day. I had heard that his knock was not playing hard but that was not evident at the camp. He continually attacked the other big men on both ends. Some school may want to take a chance with him.

A lefty guard who has pretty much come out of no-where from what I have heard. Shot a great percentage and some how despite his small size was able to score and finish tough lay-ups.

Numerous prep-school coaches were in attendance. They included:

There was also a veteran game which included players like: