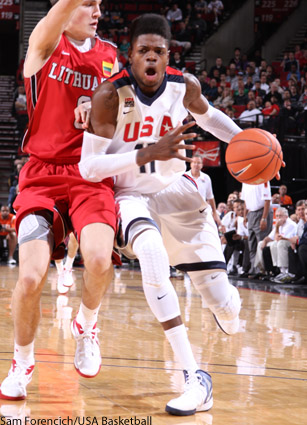 The best basketball players in the world still come from the United States. That’s why the outcome of the annual Nike Hoop Summit, which pits America’s top seniors against some of the most impressive international teens, is usually a foregone conclusion: the USA kicks butt. This year, though, things were different. The World team not only won, 84-75, at the Rose Garden in Portland, but was out ahead for the entire game.

Las Vegas senior Shabazz Muhammad stole the individual spotlight, going for 35 points. He broke the Hoop Summit scoring record, which had previously belonged to Enes Kanter, but it wasn’t enough to put the USA Junior National Select Team over the top. The World jumped out to a 10-0 lead, then went on a huge run at the end of the first half to go up 18. In the second half, the “home” team chipped away at the deficit, taking full advantage of the shot-blocking prowess of Nerlens Noel to create a much-needed defensive presence in the lane.

But in the end, it wasn’t enough. Ironically, the decisive play, which came with under a minute left, was a breath-taking Noel block that ended up in the hands up of Canadian big man Anthony Bennett, who launched a goofy, high-arcing three that dropped to seal the victory.

The top player for the World, and probably already the most impressive, complete prospect of the whole bunch, was Andrew Wiggins, who just turned 17 and plays at Huntington Prep in West Virginia. Wiggins, weeks removed from his sophomore season of American ball, is a Canadian who led the World with 20 points and 7 boards. He’s also the consensus top player of the Class of 2014, which means he could in theory be back for the next two Hoop Summits, unless he reclassifies (as Noel did recently) to graduate early. Unlike most of his international teammates, Wiggins is for all intents and purposes an American star, playing in the States and very much on the mind of NBA scouts already.

Contrast this with Chinese center Wang Zhelin and French point guard Leo Westermann. Wang’s 19 points and 8 boards made him the World’s main force inside, and Westermann was smooth and accurate throughout. However, they are international pros for whom the NBA is but one option, and maybe not the best one. For Wiggins, or Bennett (who plays in Nevada and is also a top recruit), the line between USA ball and international ball is blurrier than ever. Then again, is Canada really as foreign a country as France or China?

In 2009, a World team dominated by Milan Macvan gutted out a win against a USA that featured future pros John Wall, DeMarcus Cousins, Avery Bradley, Xavier Henry, and lottery-bound John Henson. That was a case of the Americans, who have already been through many other exhibition All-Star games this season, simply not being ready for the intensity of the World, in particular Macvan. But there’s little question that, had they managed to take the Hoop Summit seriously, they could have pulled out a win. There was just too much talent on that team.

This year, things were different. One of the reasons Muhammad shot so much was that he had to. This class just isn’t that great; one other notable exception is Kyle Anderson, a multi-positional threat who practiced at guard for most of the week and then started at power forward. He went for 12 points, 10 boards, and 4 assists. The one-two combo of Wiggins and Bennett were mightier than anything the USA could muster, on top of that there was the obligatory selection of known quantities and discoveries to power the World.

The truth is, the World didn’t just want it more, as was evidenced from the opening tip. They may have just plain been better this year. It was certainly instructive to see the Americans forced to buckle down and play for their lives, seemingly aware that they were never going to be able to skirt by on talent alone. In an age when so many players are still uncommitted at this point, it probably offered some insight into how they will perform in meaningful competition, something that can’t usually be said for these all-star contests.

But even if the USA realized they had to make a game of it, which meant playing Noel almost continuously even though he had only been able to take part in one practice, that by no means guaranteed the win. Next year, the USA team can’t help but be stronger. The World, though, will have a bigger, badder Gerald Wiggins on their side. And when the USA is facing up against the most surefire prospect since LeBron James, well, then all of a sudden basketball supremacy can hardly be assumed—even if Wiggins probably has more in common with Team USA than his World teammates.

Bethlehem Shoals is an editor at The Classical and a founding member of FreeDarko.com.