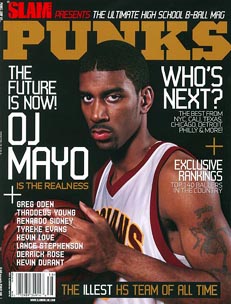 Actually, I’m pretty sure this circus doesn’t include singing and coreographed dancing, but it does seem like a saga worthy of a Disney Channel special, and it will probably become a pretty compelling book one of these days.

Which circus? OJ Mayo’s three-ring high school career. We heard about OJ way back when he was in middle school, and we were the first magazine to cover him, as I wrote something on him for SLAM back in 2002, when he was a seventh grader. (The story I wrote was sort of a protest story about the insane amount of attention being placed on kids that were so young; ironically, when I asked OJ’s coach if I could speak to him for the story I got turned down.) Since then we’ve covered OJ regularly, and he even posed for the cover of our inaugural Punks special issue last year.

After days of rumors and speculation, OJ confirmed today that he’ll be transferring from North College Hill HS in Cincinnati to Huntington HS back in his hometown of Huntington, West Virginia. It shouldn’t be too surprising, considering OJ’s longtime College Hill running mate Bill Walker was declared ineligible earlier this year. By enrolling at Huntington, Mayo will get to play with a few of his AAU buddies, including Patrick Patterson, last year’s West Virginia player of the year.

OJ has a lot of hoops left to play, and he’s already provided a lifetime of headlines. Talk about a tough act to follow…