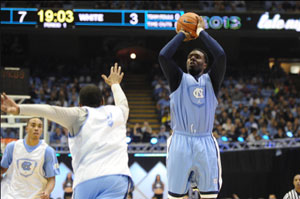 Fresh off of a 25-11 season that showed flashes of brilliance and periods of inconsistency, the North Carolina Tar Heels are a year older, more mature, and blend a mixture of size and athleticism that could allow them to cause some serious damage this season. Much of their potential success rests in the hands of elder-statesmen Leslie McDonald, James McAdoo and PJ Hairston (once he’s back from suspension). Toss in some legit talent in the freshman and sophomore classes, and you see why there is some optimism for the Tar Heels.

Not the spectacle that Kentucky’s Big Blue Madness was, Late Night With Roy offered more of a theatrical approach with players partaking in skits and busting a move on the dance floor. The near-capacity crowd loved every second of the action, as evidenced by the enormous amount of love that they gave PJ Hairston, despite all of the turmoil that he has been through this past offseason.

“[The ovation] was something that I think he appreciated and I did too,” Roy Williams said. “He’s had a tough, tough time, but the majority of it was caused by himself. I liked the way he came out and waved to the fans, and it always helps when you make three threes in the first five minutes of the game.”

The game that Williams was referring to was a 20-minute exhibition with no shortage of body-crashing fouls and ish talked. The Blue and White squads wound up finishing the game with a 50-50 tie. While the players wanted to go a few extra minutes to crown a victor, Roy ultimately shut it down, leaving things at a draw.

Here are a few of the players who stood out in the spirited scrimmage:

Much has been written about the offseason that Hairston had, so we’re just going to talk about his game instead. The shooting guard straight took over the scrimmage, bombing three NBA threes in the first minutes of the game. He got the biggest pop of any player on the team, showed off a few smooth floaters, and simply looked like an NBA two-guard playing amongst college kids in the scrimmage.

Going back to the jumbo lineup that Roy Williams has used in the past, James Michael McAdoo played at small forward for his entire time on the deck. The natural power forward looked comfortable facing the basket and while it was evident that this will not be his long-term slot on the court, it was clear that he could play the 3 for spurts. Coming back to UNC for his junior campaign after flirting with bouncing to the League two years in a row, UNC’s frontcourt star will be integral to the Tar Heels’ success.

The top defender on the ’13-14 Tar Heels is undoubtedly Tokoto, who also shut down the Dean Dome with his absurd dunks during warmups. He’s shown off an improved game as a slasher, blowing by defenders with his explosive first step. JP’s jumper is still a work in progress at this point and his development on the offensive end will be essential in UNC’s success.

Showing flashes of brilliance mixed with the periods of inconsistency during his freshman season, James appeared ready to turn the corner. The 260-pound center exhibited flashes of a strong jump hook and jumper out to 18 feet. There were still times in which the Miami native made the game a little too difficult (did a few unnecessary extra moves), but the talent is there for him to potentially do some serious damage in the ACC.

The bouncy pogo stick was a straight game-changing athlete in the scrimmage. Standing a wiry 6-9, he used his length and athleticism to alter to game on both ends of the court. With an improved post game and the ability to hit open mid-range Js, expect Brice to receive considerable burn this season.