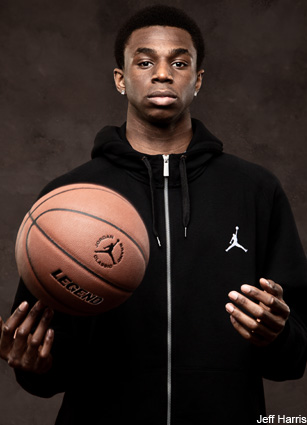 He tried his best to look all grown up. There was an all-black suit with vest, a dazzling gold watch and the patent tuxedo shoes on his feet. And when Andrew Wiggins won the Gatorade Male Player of the Year award last week, he said all the right things. He thanked God, his teammates, his family and coaches. He smiled and took pictures with everyone who asked for one. But you can’t hide that face. And he’s been growing his hair. But it’s really easy to look like a professional at Gatorade’s stunning annual gala, featuring a lovely three-course meal; gorgeous décor and a mix of dressed up professional athletes.

This year’s gala was held at the W Hotel in Hollywood, a solid spot for all the kids coming into town to enjoy, smack in the middle of Hollywood Blvd. Since 1985, Gatorade has honored a male and female high school athlete of the year based on athletic excellence, academic achievement and exemplary character. Nicely designed banners of previous alums dotted the Gatorade setup, highlighting previous basketball winners such as Lisa Leslie, Maya Moore, Alonzo Mourning and Kevin Love.

For 11 years running, Gatorade has flown out their high school national athletes of the year in each respective sport to Hollywood in order to attend the luncheon/dinner as well as the ESPYS. The high school athletes, pulled from all across the country, get a chance to spend some time with each other, meet professional athletes and enjoy the Southern California scenery. The 12 Gatorade National Athlete of the Year recipients who attended were from following sports: basketball, football, soccer, volleyball, track & field, cross country, softball and baseball .

While Wiggins brought home the hardware on the boys’ side, Springfield High’s (Oregon) Mercedes Russell was edged out by soccer star Morgan Andrews for the girls award. Despite the outcome, the Tennessee-bound Russell enjoyed her time in Cali, especially getting a chance to meet one of her favorite players, Pacers forward Paul George.

After the event, all of the athletes in attendance made their media rounds before heading to the W rooftop pool for the post party. It was cool to see all the high school athletes hang with each other upstairs, snapping photos and acting like happy teenagers. Wiggins mingled with some of the other athletes in a Brooklyn Nets snapback, white tee, small gold chain and Jordan 11 Concords—the guy in front of me playing on his phone has been written about from coast to coast and may likely be the No. 1 pick in the 2014 NBA Draft, but he’s just a teen.

When he sat down with me for our interview, it was in a side room that Gatorade’s PR firm Fleishman-Hillard had set up for one-on-ones. The set up was great, name tags for each organization throughout and plenty of light for camera crews. But the lights were bright and heavy. When Wiggins sat down, I could see that he was uncomfortable. “What’s wrong?” I asked.

“Nothing,” he said, putting his hands to his face for a second. “But these lights are killing me.”

I offered to switch seats with him—this was likely his 15th interview of the night and my seat didn’t have the light hitting my eyes.

He refused the gesture.

After a few minutes, he was fine.

SLAM: I heard you hate doing media. Is that true?

Andrew Wiggins: I don’t mind it.

SLAM: Is it hard for you to have to talk about yourself?

AW: No, not at all. I’m just very low key with everything that I do. I’ve gotten used to it.

SLAM: What did you think about being in SLAM?

AW: I liked that a lot. I grew up reading the magazine. My favorite cover was the one with LeBron when he was in high school.

SLAM: Do you recall some early memories of basketball in your life?

AW: Basketball has always been a part of my life. My family moved to Greece when I was 1 or 2 years old when my dad played in Greece. He told me stories about how he would take me to practice and I would sit there and watch the whole practice, watch what they were doing. I think I’ve just always been into the game. I’ve always liked basketball. Even when growing up in Canada—people don’t think Canadians are that big into basketball, but we are proving it now, that we are just as good with Anthony Bennett going No. 1. We have a lot of great players like Kevin Pangos, Stefan Jankovic—just a lot of good players.

SLAM: Was the talent level always this good when you were growing up?

AW: It’s always been good but now more people are being exposed. It’s a different system of basketball.

SLAM: So you’re already at Kansas. What are your first impressions?

AW: I like it a lot. Lawrence is a college town, people there don’t show you nothing but love. The practices are really hard. We have the best strength and conditioning coach in the country. Every day in practice we go hard. I’m a freshman so I’m trying to take someone’s minutes and they’re not just going to let me take their minutes. So I have to go out there and go hard and be hungry. I think we will be a special team.

SLAM: What are some of your favorite shoes? What basketball sneakers have you been rocking this summer?

AW: On the court, I wear what the team wears.

SLAM: Really? I find that hard to believe, Andrew.

SLAM: That’s pretty hard to do isn’t it? We live in a Hypebeast world, so how do you find something that nobody else has?

AW: I hunt. Me and brothers are all the same size and we’re in different states, so we may trade for what we don’t have.

SLAM: So why do you always wear a team shoe, is that a unity thing?

SLAM: What are you saving them for?

AW: To walk around in. I don’t want anyone stepping all over my shoes and giving them skid marks.

SLAM: A lot has happened for you over the past couple years. Who in your life reminds you to try and remain a kid through it all, to enjoy it?

AW: God and my family. And my friends—the ones that treat me no different than they did 10 years ago. It’s good to have.