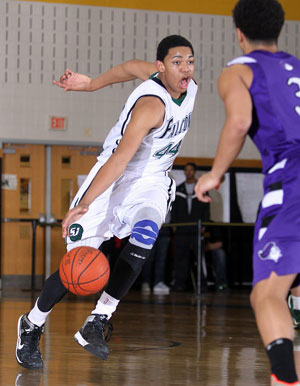 At 16 years old, 2014 St. Joseph (NJ) center Karl Towns played for John Calipari on the Dominican Republic national team in the FIBA World Olympic Qualifying Tournament. At 17 years old, Towns reclassified to the Class of 2014 and verbally committed to the University of Kentucky. Today, Towns is considered a top candidate to be the No. 1 overall pick in the 2015 NBA Draft.

With an international name and 14,000 followers on Twitter, Towns already has an NBA-ready body—a 7-0, 248-pound physique that is far more mature than the leading candidate for the No. 1 pick 2013 NBA Draft, another Wildcat, Nerlens Noel.

Rocking size 20 shoes before he can even legally vote, the Jersey native can run the floor like a gazelle, rebound, block shots and also dish some crafty passes.

At the third annual Mary Kline Classic, Towns even finished second in the event’s three-point shootout. He beat out eight guards who are considered some of the best up-and-coming shooters in the nation.

Before he drilled over 60 percent of those three-point attempts, Towns spoke to SLAMonline about his commitment to Kentucky, his Dominican national team experience and his bright future.

SLAM: How did it feel to verbally commit to Kentucky on national TV?

Karl Towns: It was a great experience for me and my family and it was a great moment in my life. To be able to higher my education for free and also play in a great basketball program is a great dream of mine. When I was younger, I played the game of basketball to get a college scholarship and I’m so happy I’m able to fulfill my promise to my parents and be able to go to college for free.

SLAM: When you first picked up the phone and heard that it was Coach Cal on the other end, what was your thought process?

SLAM: How would you assess the experience and your play for the Dominican team this summer?

KT: It was a blessing. Because, you know at the end of the day, I never new that Coach Cal would be my coach in college. It was really great to play with Al Horford and the rest of the guys. I learned a lot from them.

SLAM: Have you been in touch with Coach Cal about the rest of your recruiting class?

KT: For me, I don’t know, and I just want players to come to Kentucky if they want to win. I want to win a Championship there. If you wanted to get recruited to Kentucky, know that I’m going to be there and I want to win.

SLAM: What is your biggest weakness right now, as a player?

KT: I always say that everything is a weakness. You can’t just work on one part of your game, I try to always work on all aspects of my game to make myself the best basketball player that I could be.

SLAM: At Kentucky, freshmen are often expected to take on a leadership role. What can you bring to the locker room as a leader?

KT: I’m a big-time demander. I demand you to do something. I think I have something like a potent attitude where I really need my teammates to do what I want them to do. If they don’t do it, then I’m gonna be really upset and I’m gonna make you do it. St. Joe’s people know how I am. The team knows how I am. I’m very demanding and I expect the most of everyone. If you don’t give me the most, then I want you to sit down and not play.

SLAM: Many think that, right now, you’re the leading candidate for the No. 1 overall pick in the 2015 NBA Draft. What are your thoughts on that?

KT: For me, I feel those are realistic expectations and aspirations. I work real hard in the gym and I just expect the highest from myself. So, if I do everything I can and, god-willing, everything goes right, then I could see myself being the No. 1 pick and I could see myself having a very talented career. I just need to continue to work on my body, keep myself healthy and I can go a long way.