Road to the Final Four: Georgetown 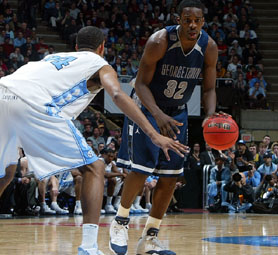 Tacky name aside, every day until Saturday night’s hampering of your social life that we like to call the Final Four we’ll be drowning you with Final Four coverage for each team. Today is Georgetown and be sure to keep checking back for more throughout the day. Just know that I’ve been on Wikipedia’s Georgetown Alumni site. This could be a long four days. If you go to the school or are an alumnus, email us or post below to tell us what it’s like on your soon-to-be-rioted campus before your dorm is plastered with eggwhites and set on fire. We’d love to hear it. — Ben

The following are apparently the only three ways to address Georgetown’s 96-84 win over UNC on Sunday.

“Did you see UNC collapse the other night?” “They shouldn’t even be there. Jeff Green traveled on Friday.” And, “Nice of Roy Hibbert to show up in the second half.”

Yes, UNC collapsed but Georgetown must have had something to do with it. Jeff Green traveled, but that was two days beforehand. Give a UNC player the ball and nine steps and he’s not making a shot between two defenders with two seconds left at this point. And Hibbert got four more offensive boards when it counted than the entire Tar Heel frontcourt.

Most of all, this team is in the Final Four. It’s time to start treating them like it.

It’s no fluke, either. Their path is more harrowed than any of the other remaining teams, save only their upcoming semifinal opponent Ohio State. After the veritable pickup game against Belmont, the Hoyas’ second half rally past second-team All-American Jared Dudley and Boston College quietly bowed out a sleeper team. That Jeff Green shot against Vandy, who beat two teams with Sweet 16 dreams before their 66-65 loss to the Hoyas, came a minute after he Hibbert fouled out. This team is supported by two but carried by none.

That hidden depth is what makes Georgetown championship caliber. Just like UCLA. Just like Florida. Just like Ohio State.
For a team that makes so many second-half runs, last-second shots and win with their feet glued to the floor in the first half, they’re admittedly astoundingly subtle about the whole thing. Especially for a team that gives the ability of two non-cheerleader/rabid fan cutaways in the audience (Doc Rivers and Papa Patrick Ewing).

But that is their nature and has been all year. Georgetown started off the year 4-3 and dropped quickly off the radar with losses to Old Dominion and a then-unheralded Oregon. The Hoyas win games when they need to, even if their arrival is briefly setback.

Georgetown will rebound and drive to the basket when they need to. Roy Hibbert will stop Greg Oden when he feels like it. Jeff Green will be the best player on the floor in the last five minutes against Ohio State on Saturday.

It would be best to get used to it. Otherwise, start making up excuses for the not-unlikely event that this team is raising a trophy Monday night of next week.