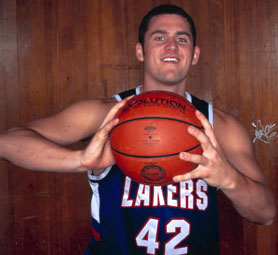 Upon arriving at DePaul University’s practice facility for last Monday’s Roundball Classic practice, one thing was obvious: This may have been a warmup for an all-star game, but the players were treating it like it was their first tryout for a rec-league team. Some of the things that immediately stuck out to me were: Baylor signee LaceDarius Dunn’s (6-4 combo guard going to Baylor) Mohawk, how Corey Fisher and OJ Mayo were seemingly attached at the hip (the two had a memorable duel on ESPN2 last month) and while they were all extremely talented, how many of the players lacked a lot of the basic fundamentals. The players were broken up into guards and big men for drills, and being someone who has workouts for high school and college players, I paid close attention.

The post players worked on their back-to-the-basket moves, facing up and mid-range jumpers, while the guards worked on wing moves, pull-up jumpers and working off screens. Regardless of their individual athleticism, strength and skillset, it was easy to tell who really knew what they were doing and who was getting by on raw talent. Since the bigger-name kids get all kinds of love, I’d rather focus on some of the more unheralded players.

H-Town’s DeAndre Jordan (headed to Texas A&M, unless he chooses to follow Billy Gillispie to Kentucky) and St. John’s recruit Justin Burrell were two of the rawer big men in terms of their post moves and footwork, but they were easily the most athletic. Jordan, a 7-footer with some Dwight Howard in his game is just huge, but the 6-8 Burrell, who attends Bridgton Academy in Maine is a freak athlete that will be banging on a lot of Big East players in the next few years. Two African kids who play their high school ball in the U.S., Alexis Wangmene, a 6-8 native of Cameroon from Blair Academy in Jersey and is going to Texas next season (he’s also the adopted son of Spurs’ GM R.C. Buford) and 6-9 DePaul recruit Nayal “Mac” Koshwal of Boys to Men Academy in the Chi, also impressed me; Wangmene with his fundamentals, and Koshwal with his versatility, handle and outside touch.

On the other side of the floor, Arizona State signee James Harden, a 6-5 guard from Cali, displayed a nice all-around game. Harden, who I first saw play as a sophomore and expected to develop into a nice player, proved me right, as he has a solid, if not flashy handle, a solid mid-range and catch-and-shoot game and slashes to the hole with better athleticism than he looks to have, as well as playing some very sticky D. Georgia native Chris Allen, a 6-3 combo guard going to Michigan State, will remind Spartan fans of Shannon Brown, in both appearance and game. An explosive athlete, Allen finishes at the rim extremely well, but also can knock down the J off the dribble and when spotting up. Future Syracuse point Jonny Flynn, the smallest player on the court, was also the quickest. He also has bunnies, so expect to see him posterizing some unexpected big man on the highlights in the coming years.

After the drills, the players took a break before scrimmaging. Mayo, running the point for his team, was very intense from the start. He pushed the tempo, was very vocal and got his teammates involved, as well as getting buckets. His shot selection wasn’t the best, however, and when the jet-quick Flynn switched onto him, he had some problems with the little guy’s on-the-ball D. Two power forwards from Georgia, Gani Lawal and JJ Hickson, both about 6-8, 230 and headed to Georgia Tech and N.C. State, respectively, took the drills to heart and showed off post moves that would have made Tim Duncan proud. Taylor King, a 6-8 wing going to Duke, and Corey Stokes, a 6-5 Villanova-bound wing, easily had the best jumpers in the building, each knocking down jumpers from 25-30 feet out. Kevin Love, the 6-9, 260-pound Oregon big man, was a man in the paint and threw his “patented, Wes Unseld-like outlet pass” on numerous occasions to get his squad easy buckets in transition. Love isn’t the greatest athlete in the world, but he’s more skilled and probably stronger than Tyler Hansborough at this point, so expect him to have UCLA back in the title hunt next year, especially if Darren Collison returns to Westwood (note: Afflalo was a removed part of that last sentence). Jordan dominated on the interior by basically camping out five feet from the hoop and either dunking or getting fouled whenever he caught the ball.

I won’t call out any players who looked suspect, just because they’re still kids, but a few players definitely seemed like they had never played with that many high-caliber players at the same time, were used to being the man on their team and couldn’t adjust or just weren’t ready to match the intensity of the scrimmage. Anyway, it set up a very entertaining game the next evening, which you can read about in the mag in a couple of months or so.

Real quick, best wishes to Herb Pope of Aliquippa, Pa. Pope, a very talented, 6-9, 235-pound wing was slated to participate in the game, but didn’t make the trip after being shot the week before. Living in PA, I’ve followed Pope’s progress as a player and most recently saw him play in the state championship game against Prep Charter High School of Philly, which Aliquippa lost in a thriller.

By the way, did anyone catch the Nike Hoop Summit on Saturday? The annual game, set up in a U.S. vs. the World format, not only gives fans another look at the top American high school ballers, but provides a glimpse at some of the best young international talent in the game. Previously unheralded players like Dirk, Tony Parker and last year’s surprise lotto pick Mohammed Saer Sene of the Sonics have used the event as a springboard to the league with big-time performances in front of NBA personnel. It also gives USA Basketball an opportunity to preview potential U.S. Men’s Senior National Team participants for the future. The game was never really close, as the U.S. blew out the World team by a dub, 100-80, as the World simply couldn’t contend with the quickness of the Americans.

The U.S. guards pushed the tempo, played suffocating defense and were unselfish throughout the game. OJ Mayo bounced back from his poor outing at the McDonald’s All-American Game with 20 points, and played the best D I’ve ever seen him play. On his future home court, the FedEx Forum in Memphis, Derrick Rose posted a solid all-around performance, while Jonny Flynn set a Hoop Summit record with 10 dimes and 6-3 Arizona recruit Jerryd Bayless went for 15, including a few triples and a filthy windmill dunk on the break.

On the interior, top uncommitted senior Patrick Patterson played with his usual toughness on the inside and put up 12 and eight, as well as being a shot-blocking presence, while Kevin Love boarded his way to 13 and 8. Future Dukie Kyle Singler was solid on the wing, but Kansas State commitment (for now) Mike Beasley struggled, although his mind was probably elsewhere with the news that the coach he intended to play for at K-State, Bob Huggins, was headed to West Virginia.

Even though his team was blown out, France’s Nicolas Batum looked like the best player in the game and a potential top-10 pick if he declares for this year’s NBA Draft. The lanky, 6-8 wing was the best athlete in the game, and despite foul trouble, he finished with 23 points, including about five high-flying bangs and deep treys. I’m not big on upside, but if Corey Brewer is now a top-10 lock, then don’t be shocked if this kid slips into the top-five, based on his upside and depending on how he does in workouts for NBA teams. If 7-0 Chinese prospect Yi Jianlian is considered the top international prospect in this year’s draft, Batum should be a close No. 2.

Also impressive was 6-8 Israeli combo forward Omri Casspi. Casspi spearheaded an International run that cut the deficit to 10 at one point through sheer will. He made steals and took the ball coast-to-coast for dunks, he challenged the U.S. players on the interior and showed moxie and a mean streak similar to an Andres Nocioni. Casspi is athletic, versatile and has plenty of heart. If he makes his way to the NBA (he’s under contract with international juggernaut Maccabi Tel Aviv), I’m confident he’ll make an impact and be a rotation player at the least, just due to his energy.

Other international players who showed something were 6-5 Finnish point guard Pettri Kopponen, who showed nice quickness and court vision, and 7-1 Nigerian center Solomon Alabi, who plays high school ball in Florida and will attend Florida State in the fall. Alabi is a long, athletic shot-blocker, who should have a Hasheem Thabeet-like (the UConn freshman center; I hear he’s declaring for the draft, a big mistake in my opinion) in the ACC next season if he can add some strength. Alexis Ajinca, a 7-1 center from France who’s nearly as well-regarded as Batum in international circles, really disappointed me. While he’s got a tremendous wingspan and is very athletic, he likes to float on the perimeter, struggles to finish and doesn’t have the best hands or post moves. Still, you can’t teach size. Ryan Richards, a 6-10 post player from England who plays in Spain, didn’t get much burn so I can’t really say much about his game. But a 6-10, 225-pounder who plays pro ball at 15 years old (he’s no Ricky Rubio) is worth monitoring.