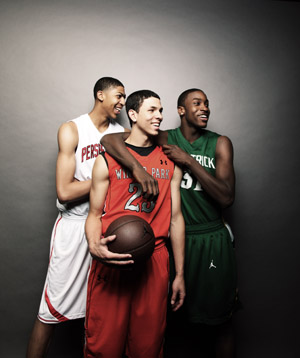 As always happens at this time of year, we had to plan out a cover that would come out in the heat (no pun intended) of the Playoffs without knowing exactly who would be alive. And trust, if we had guessed based on who’d be alive we certainly had the Lakers lasting at least until the Final Four. Given that timing concern, and the fact that this year’s high school class is probably the best since 2007, we thought the time was right to put the game’s future in focus. And with Michael Gilchrist, Austin Rivers and Anthony Davis leading the way, that future is bright. Besides our cover subjects, SLAM 149 features our entire SLAM All-American teams (boys and girls), recaps of all the big high school all-star games, a super-intense book excerpt by Chris Herren (check back tomorrow for more on that), an old school q+a with Kevin McHale and features on current NBA big men LaMarcus Aldridge, Serge Ibaka and…Pau Gasol. Like we said, timing is tough with this one!

But back to the cover. It’s not only the first time these three great high school players have gotten exposure like this, but it’s also the first cover story by our man David Cassilo, who covers college hoops so well for us. As you’ll read below, the whole experience may have been as special for Dave as it was for these players. Enjoy the read, and then buy this issue as soon as you see it!—Ed.

Sometimes when you’re writing a story you almost forget how cool it is that people actually read what you write and care about it. I’ve always tried to stay humble, but you can’t really ignore the following: writing the cover story for SLAM is a really big deal.

But even as I flew down to Charlotte for the Jordan Classic to interview Austin Rivers, Anthony Davis and Michael Gilchrist, it didn’t really hit me till we were at the photo shoot.

It was there where the three players were trying to play it as cool as I was. They had their serious looks on and were trying to hide all their emotion. But then Gilchrist reminded everyone in that room what was actually going on.

“This is for the cover of SLAM!” he burst out while jumping up and down on top of Rivers and Davis. Nobody in the room could resist a smile.

You have to appreciate the moment, and while being on SLAM’s cover is a big one, there are many more to come for these three special players.

As you’ll read in the story, all three are very different from each other.

Rivers has the demeanor of a professional already, following his father Doc in and out of NBA locker rooms since he could walk. He’s a confident player who can score from wherever he chooses and should have one of the biggest impacts in basketball next year at Duke.

Davis is a Hollywood story. He was a 6-2 guard on nobody’s radar before his junior season and now he’s a 6-10 stud headed to Kentucky and widely considered the best high school player in the country. But he’s also humble, appreciative of the moment and still a kid in every way except his lengthy frame.

Gilchrist, Davis’ future teammate at Kentucky, is a quiet, thoughtful and passionate person, who in a five-minute conversation can make you wonder how some one could flip the switch so easily to become a ruthless, do-it-all, unstoppable force on the hardwood.

The entire weekend, the three players used their diverse personalities to play off of each other as if each was handpicked by the director of a big-budget movie. Those differences and interactions made things easy for me as I pieced it all together.

As a writer, I am always looking for some sort of symbolism to draw on. For this story, it didn’t take long to find the parallels between my subjects and my own life. Here were three high schoolers loaded with potential, their future ahead of them and about to embark on a special moment in their career. And here was I, just barely older than them, feeling all of those same things as I wrote about them.

This is my first cover story anywhere, and I am thankful and lucky to have the chance to write it. If my luck continues, I’m certain this won’t be the last time I’m writing about Rivers, Davis and Gilchrist.