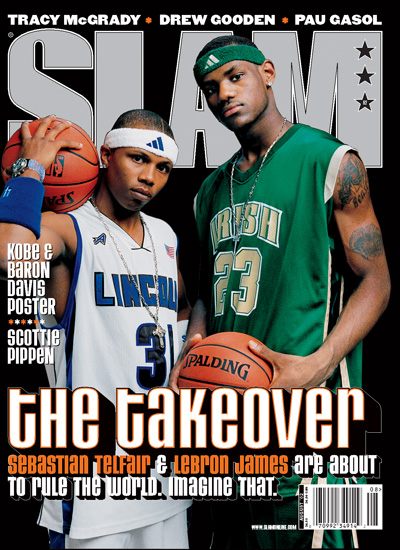 The 6th Man: After much thought, there’s no getting around this, so I’ll just say it: LeBron James may be the best high school baller ever. Now, while Calvin Murphy tries to catch his breath and Big O gets up off the floor and Kenny Anderson asks P-Double for my number, let me explain. It all started in ’96, when Kobe Bryant was making headlines in Pennsylvania. KG had made the leap the year before, and Kobe was considering. So, come time for the McDonald’s Game, we headed to Pittsburgh to watch. To be honest, there was no need to see the game. Five minutes with Kobe and you just knew he was an All-Star in progress. He was relaxed, easygoing, funny…17 going on 30. Had the NBA mindset to go with the game. It was just a matter of putting on some muscle (and, uh, airballing L.A. out of the playoffs.)

But now. Now things are different. Last year, LeBron (he’s the one on the right) was named a first-team All-American by USA Today following his sophomore season. This is unheard of. This year he was named Player of the Year. Also unheard of. Akron’s Finest would be a top-five NBA pick right now—maybe even No. 1—and we don’t just mean on potential. Yes, he is that good. Sure, he’ll take his lumps, but look at him. Kobe didn’t have that kind of build until his third year. Next to him, you’ve got Sebastian Telfair. The latest (and perhaps greatest) of a long line of Brooklyn-bred point gods. He’s gonna be a junior next season—a high-school junior. Undoubtedly some of you are screaming “too much too soon!” (or at least furiously typing e-mails saying the same thing) and maybe you’re right. Maybe Sebastian (and LeBron, for that matter) will end up following Korleone Young instead of Kobe, or Leon Smith instead of Kevin Garnett. Maybe this will be their high point. There are, after all, no guarantees. But I wouldn’t count on it.

In real time, ’96 wasn’t so long ago. But in hoop years, it’s a lifetime. Since KG and Kobe and Tracy (oh my), the high school-to-pro leap has become a more regular route. And in prepping for that possibility, the top high schoolers now train like NBA All-Stars—hit the weights, shoot for hours, play constantly. Free from NCAA restrictions that keep collegians in check in the offseason, the top HS players ball all summer. More important, LeBron and Sebastian have the support (from coaches and fam) needed to get them to the next level. And, as good friends, they have each other. When the time comes, Bron and Bassy should be as ready as anyone. We probably won’t have to wait long to find out.