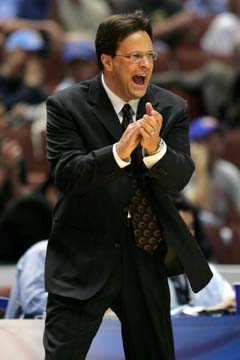 What the hell happened at Indiana University?

For a program that is as entrenched in the lore of the college game as any in the nation, their current state of affairs is about as bad as it gets. Three coaches in as many years, only two players returning to this year’s team, all on top of impending sanctions from the NCAA make the project for newly-inked Head Coach Tom Crean an uphill battle from the jump.

Not only was last season’s promising season (one that actually had some projecting a deep March run) derailed by the late-season Kelvin Sampson/texting scandal but the program’s cupboard is suddenly about as bare as Mother Hubbard’s.

As the university and the hundreds of thousands of Hoosier faithful look ahead to the future, what is truly left at Indiana? Is there any promise for short-term success in the wake of the Sampson’s auspicious departure?

Here’s how things stack up as of today.

Eric Gordon and DJ White were both first round selections in this past spring’s NBA Draft and forward Lance Stemler was a part of a trio of players that graduated in May. Before the NCAA Tournament even started last March, then Interim Head Dan Dakich dismissed key contributors Armon Bassett and JaMarcus Ellis. After his hiring, Crean wasted little time in upholding Dakich’s decision and even added the metabolism-challenged DeAndre Thomas to the list of castaways.

For the record, Bassett is meeting back up with former IU head Mike Davis at University of Alabama-Birmingham, Ellis appears headed to Northern Kentucky, and Thomas is going the NAIA route, opting for Robert Morris.

The exodus did not stop there, however.

The young and promising guard Jordan Crawford decided to finish his college career at Xavier while fellow sophomore Eli Holman, who got so enraged when meeting with Crean that university police were called in to intercede, will be taking his long and lanky frame to Detroit Mercy. On top of that, incoming freshmen Devin Ebanks never made it for fall classes, opting out of his letter-of-intent with Indiana to hook up with Bob Huggins and West Virginia.
With all due respects (this coming from a Division-I garbage-time man, myself), this leaves just Brett Finkelmeier and Kyle Taber, who combined for a whopping 1.6 points per game last year.

There is hope, however. In addition to two solid, junior-college signings and an imported transfer, Crean scrambled to sign a couple guys late in the game, most notably, Malik Story, who played alongside James Harden at Artesia High in LA before finishing down the road at Ribet Academy.

While transfer rules won’t allow Jeremiah Rivers to be an immediate help, the son of Celtic coach, Doc Rivers is bringing his aggressively defensive skills from Georgetown.

Maybe most importantly, though, was the locking-up of the former Marquette boss with a long-term, ten year deal. With the move, the university is getting a proven face for the program. In contrast to the NBA, the right head coach is the most essential element to any college program.

(When you think of Carolina and Duke in a historical perspective, do the images of Dean Smith and Coach K come to mind, or Rasheed Wallace and Elton Brand? Flip that around for say, the Bulls or Celtics and you will see what I mean).

The names on the back of the college jerseys will change from year to year, but the person bringing in that talent needs to be smart, stable, and successful (and not necessarily in that order) for extended success. The Crean signing and subsequent extension was the correct start and probably the best decision the school has made since firing a certain, hot-headed, chair-tossing dictator/coach.

In reality, there is actually a precedent already set. Remember that Sampson was guilty of being a textual predator while at Oklahoma, as well.

That university was proactive in completing their own investigation and the NCAA handed Sampson a one-year ban on phone and text contacts. When the edict was lifted a year later, Sampson and his staff (now in Bloomington) wasted little time in racking up the now legendary violations which have made him the most untouchable name in the college game today.

However, the minute that Sampson hitched his wagons outta’ Norman, the incoming staff led by former Duke guard, Jeff Capel were able to land the state’s top prep player (and quite possibly the No. 1 pick in next year’s NBA Draft) in Blake Griffin.

With that, do you think Crean might choose to reopen the recruitment of Fort Wayne’s junior DeShaun Thomas who made a verbal commitment to Ohio State when he was just a freshman?