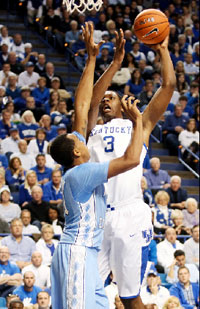 Terrence Jones didn’t spend his summer chilling with friends all of the time. He didn’t see intense off-season workouts as an optional way to spend his free time.

The offseason was all about getting better, about improving to the point where he could be the guy who was going to lead the University of Kentucky to complete the job it failed to get done last April in Houston.

Jones still remembers 56-55. It was the score of the Wildcats’ national semifinal loss to eventual national champion Connecticut at Reliant Stadium.

The loss was ugly. Jones scored 11 points and 15 rebounds, but the double-double was no consolation prize for the 6-9, 252-pound star out of Portland.

As a team, the Wildcats shot a miserable 33.9 percent on their way to a disappointing end to a 29-9 campaign. The pain of that setback, which crushed Kentucky’s dream of its first title since 1998, drove Jones to the point where he passed on NBA riches for another shot at college hoops glory.

And for Jones, the emphasis of the offseason was the little things that make a big difference in a game. After all, in that Final Four loss to the Huskies, Jones missed all five of his free-throw attempts and turned the ball over twice.

“I tried to make my all-around game better by working on every little thing to improve it,” Jones said. “Spending so much time in the gym helped my mental aspect by going harder and the little things more serious.”

And the hard work has already paid off—the proof is on the latest stat sheet. Jones is averaging 15 points per game and grabbing 7.5 rebounds per outing. He also has 14 assists, 11 steals and has swatted away 20 shots.

Jones is shooting just under 50 percent from the floor through eight games as well and the Wildcats are the top-ranked team in the land entering the first full week of December.

For Jones, who has led the Wildcats in scoring three times—his season-high, a 26-point effort in an 81-59 win over St. John’s—the success is no big deal. He expects to be one of the best players in the country. No exceptions.

“I’ve got to play my role to the best of my ability and do my best to be one of the leaders,” Jones said.

He has handled his role well. But during the times when Jones needs an opinion from someone outside the coaching staff, he can turn to his cousin, Damon Stoudamire, an All-American at Arizona and a former NBA Rookie of the Year with the Toronto Raptors.

Stoudamire is now an assistant coach with the Memphis Tigers but Jones never hesitates to talk hoops with him.

“I seek his advice all the time,” Jones said. “He’s one of the people I look up to the most, and he’s one I go to for advice because he’s already been through everything that I am going through or trying to go through as a basketball player.”

The day will arrive when Jones is in the NBA, just like Stoudamire once was. For now, it’s all about replacing the memory of a 56-55 loss with something far more memorable—a win in the National Championship game this coming April in New Orleans.

“I came back because I want to try and win a National Championship,” Jones said. “With the returning guys we have and the freshmen coming in, I believe we have a chance to do it.”