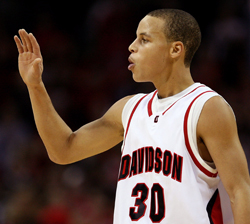 As a senior in high school, Sebastian Telfair got used to the steady flow of celebrities at his games. Among the regulars was friend and NBA rookie LeBron James. The former high school phenom had no qualms about sharing his high expectations for Telfair at the next level; of course, we all know how that played out. The former Lincoln standout hasn’t exactly lived up to the rave reviews he got on the prep scene and has ultimately disappointed as a pro.

It appears King James now has another favorite rising pro prospect in Stephen Curry. LBJ has been a courtside spectator for a couple of Davidson’s games this season, including as a guest of the college for the Wildcats’ match up with Wisconsin earlier in the year. Does LeBron’s support of Curry spell letdown in the junior’s future? No, but that doesn’t mean the pint sized assassin is destined for NBA greatness either.

Curry is a modern day Pete Maravich plain and simple. Not since the “Pistol” lit it up down in the Bayou has a player captured the imagination of college basketball fans the way in which Curry has in the last year. His propensity to hit the impossible shot continues to impress everyone lucky enough to witness him in action. Maravich went on to a successful pro career, but let’s be honest, it was a different NBA back then. Maravich was an innovator—no one had ever seen an array of shots and passes like the he was able to bring to the table.

For Curry, the challenges will be much greater. Today’s NBA is more athletic, with bigger and longer players. The problem facing a player like Curry is the high volume of shots he takes in order to achieve his point production on a nightly basis. Including Saturday’s loss to Purdue, Curry is averaging 21.6 shot attempts per game with 10.5 of those attempts coming from beyond the arc, an astronomically high number ever for a gunner. Worst of all, is that he is only connecting on 36.2 percent of his three-point attempts.

Certainly Curry isn’t the first of his kind to flourish at the collegiate level and attract the kind of national attention he is receiving. Just a couple of seasons ago, a two-man race for National POY honors

between J.J. Redick and Adam Morrison captivated the country. Both players were pure scorers who never met a shot they didn’t like (Redick attempted 17.9 field goals per game and Morrison 18.2). Delving even a few more years back we see other elite players like Jameer Nelson, Dwyane Wade and Carmelo Anthony all attempting more than 15 shots per game, which is how it works when you’re an elite scorer at the collegiate level. The biggest difference between Curry and the rest of that list, though, is that none of the other players were one-man wrecking crews; they all had sidekicks they could rely on to a certain extent.

Now in terms of profile and skill set, Curry most closely resembles Redick, with the biggest difference being Curry’s ability to play the point guard position somewhat. Curry plays in a system designed to get him the basketball in situations where he can put his quick release to use much like Redick did, and both players love to fire from absurdly far beyond the three-point line. The ultimate downfall for the former Blue Devil in the NBA has been his inability to create scoring opportunities for himself off the dribble, something that Curry has proven to be somewhat more skilled at. Even still though, we have to look at the facts: Curry as an NBA prospect is likely a one-dimensional player.

At 6-3 and a generously listed 185 pounds, Curry will need space to get off his shot and that won’t come easy in the League where he’ll be dealing with stingy perimeter defenders. Its one thing for Curry to torch North Carolina State for 44 points, but what happens when he is trying to score against Chauncey Billups or Kobe Bryant? Making things more difficult will be the fact that with his slight frame Curry will have trouble getting into the lane and creating scoring opportunities. He simply isn’t strong enough.

Saturday’s match up with Purdue was a prime example of what Curry will have to deal with once he cracks an NBA roster. Boilermaker defensive specialist Chris Kramer hounded Curry into a 5-26 shooting performance, perhaps the worst showing of his entire career. Kramer may be one of the better on ball defenders in the Big Ten, but at 6-3 and lacking a great wingspan, he is hardly considered a ball hawk by pro standards.

What has helped Curry this season is his switch to the point position and thus far his numbers have looked pretty strong with the junior averaging over six assists per game. With the type of attention Curry receives from opposing defenses, it is almost impossible for him to not see success in the assist column. The triangle and two scheme imposed by Loyola may have been an extreme case, but seeing double coverage is a regular occurrence this year for Curry, leaving his fellow teammates with a plethora of open looks. He still needs to get the ball into the right hands, and credit should be given. But Curry didn’t suddenly develop into a pro caliber playmaker overnight.

Lastly, and this is key, Curry will be a defensive liability as a pro player. He is a pesky defender who will get his steals here and there, but the average NBA guard will look forward to the nights that the Davidson scoring machine is matching up with him. Most players will be able to elevate and shoot over Curry and when opponents opt to put the ball on the floor and go to the hole, he doesn’t have the

upper body strength to body up against these dribble drives.

What this leaves Curry with is the ability to shoot the three, a valuable asset that will make him a quality role player but not a star. Running him off of screens on the perimeter and allowing him to spot up will result in some point production. He is also quick enough that he should be able to beat some defenders off the dribble and set himself up from mid-range. In all, we could be looking at a player much along the lines of a Derek Fisher if he can put on some additional muscle.

Will we ever see Curry suiting up for an All-Star game? Doubtful. It’s a safe bet, though, that whatever team ultimately lands him either this June or the following, they will be picking up a player who can contribute right away to their organization as a sharp shooting threat.