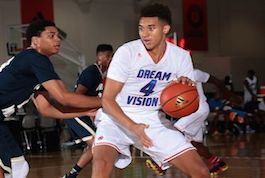 After considering UNLV, where his dad played during the 1990 national championship run, as well as Arizona, Duke, UCLA and Kansas, Chase Jeter, a 6-11 power forward from Las Vegas (NV), ultimately opted to join the Blue Devils program on Monday evening. More from the Las Vegas Sun:

Chase Jeter won’t be following in his father’s footsteps, and that’s just fine with both parties. Today in Los Angeles after playing in the adidas Nations tournament, Chase Jeter appeared on ESPNU and announced that next year he’s going to Duke“

I will be attending Duke University to be a Blue Devil,” Jeter said while unzipping his jacket to reveal a Duke T-shirt.

The Bishop Gorman High center picked the Blue Devils over UNLV, Arizona, UCLA and Kansas, although many perceived this as a two-team race. On one side was the hometown school, where Chris Jeter won a national championship as a reserve player in 1990. On the other side was the team those Rebels pasted 24 years ago, with the same man, Mike Krzyzewski, still leading the program.

Both father and son have said on many occasions that there was no pressure to stay home. Ever since the Jeters visited Duke in March, the outside perception was that this was Krzyzewski’s race to lose. That ended up being Jeter’s choice, in part, because of the balanced slate of opportunities in basketball and academics available at Duke.

“I loved the feel and the environment at Cameron Indoor Stadium,” Jeter said. “I just felt like it was the right place for me.”

Jeter, listed at 6-foot-11 and about 220 pounds, was at the Mendenhall Center last week for a couple of USA Basketball practices. Krzyzewski has been USA Basketball’s coach since 2006.

With Jeter and Las Vegas High’s Ray Smith (to Arizona) off the board, the biggest local name remaining in the upcoming class is also the highest ranked at No. 6. Bishop Gorman High center Stephen Zimmerman isn’t expected to announce a decision until he makes his five NCAA-allowed official visits.