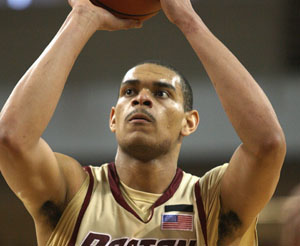 Words and Interview By: Sammy Newman-Beck

When we last checked in with Boston Colleges Tyrelle Blair it was mid-season and his BC Eagles had just suffered a bad 22-point loss to Clemson. Blair and his Eagles ended up limping through the rest of their season with 2 wins and 9 losses and left a lot to be desired for their Boston faithful.

While his season and college career ended on a sour note, Blair’s pro basketball career is just beginning. The now graduated shot blocking machine is set to receive his masters degree in Administrative Studies later this summer and is currently on his way towards a professional basketball career whether it be in the NBA or a country on another coast. In between daily workouts with his trainer and travels to Seattle and Boston for NBA combines, Blair sat down with SLAM to discuss his NBA experiences, the choice of NBDL or foreign country, and why at BC he felt he was never able to reach his full basketball potential.

SLAM: Last time we spoke was mid-season and obviously you guys didn’t end as well as you would have liked. So looking back how do you feel about the season?

Tyrelle: It was growing pains all year. We had a lot of young guys and it took us a while to get the concept of the flex. We had some ups and we had some downs. Hopefully next year they’ll be more comfortable running it.

S: And how do you feel personally about your play during the season?

Tyrelle: Well, I try to look at it in retrospect. I think the flex doesn’t really allow me to use my strengths. I’m a long, athletic big man and normally I would use my quickness and my speed but that was kind of mitigated in the flex because it’s a slow half court offense based off screens. I was talking with James Mays (Clemson) and he told me if I was playing at Clemson I would have killed because I’m long, athletic and can block shots and I would have done better in an up and down style. A slow paced offense doesn’t really fit my style. Coming in I thought I would be able to adapt my game and that I would be fine, but I realized I would have been able to have a lot better numbers if I played in a faster system.

S: So after all is said and done are you happy you chose Boston College?

Tyrelle: I like what Boston College had to offer. It’s one of the better schools in the country. I graduated and now I’m getting my masters. If anything else it gave me exposure playing in the ACC and I was able to go home and play at Florida State. I just wish it could have been a little bit better fit towards my style of play.

S: You guys played Kansas during the year so were you surprised to see them go on to win the Championship?

Tyrelle: Kansas has athletes’ man. One thing I can say about Kansas is that they had great athletes and played team basketball. From time to time some teams will have great players but they won’t play together. Kansas doesn’t mind making the extra pass. Most teams are selfish and they don’t want to incorporate everybody, but Kansas has guys who don’t mind only scoring 10 points a game so other guys can score. I think that’s what really helped them; they play great team basketball.

S: So since the season ended what have you been doing?

Tyrelle: When the season ended I started to interview agents. I picked Chris Luchey based out of Atlanta, Georgia. I liked him a lot. Right now I’m taking summer courses to finish my masters degree. I am also training in Waltham with Wayne Alpert to improve my strength, body and to work on my game. I’ve had a couple NBA work outs with Boston and Seattle and I might have a couple more coming up. I’m going to wait till after the draft and see what happens, then I’ll try to figure out what summer league team I will play on and then I will try to make an NBA roster or go overseas.

S: What other NBA teams?

S: So how did your workouts go?

Tyrelle: Pretty good. It’s funny because in Boston I worked out with James Mays who I know from during the season and in Seattle I worked out against Sasha Kaun who I played against at Kansas. So that was kind of funny how I worked out with guys I had played against during the season. The Boston work out was kind of tough because they were really looking for guards. They had Richard Hendrix, James Mays and me. The Seattle workout was all big men so that was good.

S: Did you get any responses from the coaches as to how your workouts went?

Tyrelle: With Boston we really just played and that was it. They didn’t go into any detail. But in Seattle we basically took a test about being an athlete. We had a meeting with all the GM’s and the scouts and they asked us questions and we were able to ask them questions, it was basically like an in depth interview. In Boston we basically just went in there, played, and left.

S: So towards the end of the year you became known as a real shot blocker on defense, have you noticed any of the coaches or even players noticing this?

Tyrelle: Definitely. The one thing I noticed during the year is that when I was not in the game a lot of teams would attack the rim, but when I was in the game their offense would change. I think a lot of people noticed that. So coaches kind of know that now. When I go to these workouts I get to work on what the coaches specifically want and the type of stuff they run in their own offenses, plus they get to see me play in person. I think the coaches know I can block shots and play defense so now I try to show them I have an offensive game too.

S: Switching topics real quick to your teammate Tyrese Rice (who is in this months issue). He has decided to stay in school and not enter the draft…do you think he made the right decision?

Tyrelle: I think it’s a good decision for him. From an education standpoint, he will be a senior next year and be able to graduate, which is good. Secondly, the draft is somewhat deep at point guard this year. He probably would have been drafted but next year the class may be a little weaker and it may give him a better chance to be a first round pick.

Tyrelle: I’m grinding. Obviously my first choice to play in the NBA but if that doesn’t work out then the next option is to go overseas. There’s two ways to get contacts from overseas. The trainer I work with has been in the game for 25 years so he knows a lot of guys overseas and he has them come in and watch us play. If they like us they will possibly bring us over. Also the agent I have now has various contacts overseas so he can use his contacts. Also, certain pro teams have affiliated teams overseas and you can try to link up with them as well.

S: If you had the option to play in the NBDL or go overseas, which one would benefit you more?

Tyrelle: Personally the only way I would play in the NBDL is if a NBA team places me there and is paying me. Sometimes that happens, but to just go to the NBDL and hope to get called up doesn’t really make sense. I would rather go overseas and make six figures whereas the NBDL you don’t get paid much. I would rather play a year overseas and come back and try to make an NBA team and at the same time have some money in my bank account.

S: So what would you like to do with your degree?

Tyrelle: One of the guys I know from the gym is a season ticket holder and is really good friends with the manager with Staples. I also like Target and Best Buy. I basically want to be on the corporate side for a big agency. I like technology and gadgets so getting into the Corporation side of one of these companies would be good. Once you make money you want to continue making money and going corporate would help to do that.