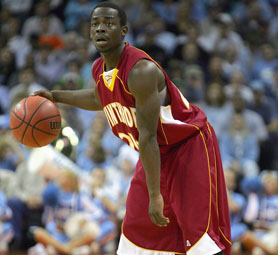 Here’s a quick test. No peaking below, no poking around the Internet because you swear you knew this anyway.

Where in this vast continent is Winthrop University?

If you said 11-Seedtown, New PlayingNotreDameintheFirstRound then you, sir, know what most America knows about Winthrop. Pretty much nothing.

But those people who knew that Winthrop is in Rock Hill, South Carolina, the ones who have known that this could be a 28-4 team, anyone who pined for this Big South Champion to get its respect. Those are the same ones who are leading the push for this team that you hardly even knew existed to be the sexy pick in this year’s tournament.

But Winthrop? Sexy? Those two words – like, say, Joakim Noah or post-haircut Britney Spears and the latter — don’t belong in the same sentence together. Get used to it, though. This team might be the this year’s George Mason. The one that, with no shaved head necessary, might end up on the front page of your newspaper this weekend anyway.

And Ricky Rogers saw these headlines coming a couple of years ago.

“I think this success has been building for the four year that these seniors have been here,” said Rogers, the Eagles’ beat reporter for school newspaper The Johnsonian.

The team, anyway, is held up by its upperclassmen, which make up its entire starting lineup. Junior Michael Jenkins (15.3 per) and seniors Torrell Martin (14.2 per) and Craig Bradshaw (13.3 per) do all of the scoring. Jenkins mans the point with Chris Gaynor, Martin is free to spot up from the wing, and the 6’10” Bradshaw collects the boards – just the way they drew it up on paper.

But what makes this mid-major conference tourney winner better than Notre Dame’s at-large bid-in are some people that, when they drew this up, weren’t even on the paper.

“I think that Jenkins, Martin and Bradshaw always have to be looked out for by other teams, [but] who I think is overlooked by teams sometimes is junior forward Taj McCullough,” says Rogers. “He can take the ball down low and post up against a defender or he can put one up from the outside and usually knock it down. In the Big South Championship he knocked down three of four 3-pointers down the stretch to help lead the Eagles. McCullough could be a main contributor in a victory for the Eagles in the tournament.”

And, as for some contributors, coach Greg Marshall didn’t even know they were on campus in the fall.

“Freshman guard Kyle Moore is a walk-on this year and could definitely be looking at a scholarship next year after his solid play this year in backup at the guard spot,” Rogers added.

That’s not a slight to Marshall’s recruiting or coaching. He is, after all, being considered for both Mid-Major and National Coach of the Year.

“Marshall has a tremendous amount of confidence in his team,” said Rogers. “Very rarely will you see him call a timeout when the team is slightly struggling. He allows them to play themselves out of it and they usually do.”

That kind of confidence pushed 1-seed UNC to the limit in November. And that swagger made them one of the only two teams to go undefeated in their conference.

Still, the Eagles realizes that Rock Hill doesn’t necessarily scream ‘sexy.’ It’s still a town known more for its golf courses and general proximity to, well, everything else. If they do make a Sweet 16 run, it won’t be on their high horse.

“This team is obviously excited about the publicity they are getting, but I don’t think it is going to their heads,” Rogers said. “When kids come up to them at the games they are fully willing to talk to them or sign autographs because they know there is still work to be done and they still want to get that first NCAA Tournament victory.”

It’s turned a campus of about 6,500 students in the middle of South Carolina into one that is “buzzing” with anticipation, “casual fans are becoming season ticket holders” and the seasons final home games were filled past capacity.

All of a sudden, too, Winthrop has become a favorite against Notre Dame.

So who knows? Maybe by Sunday Rock Hill will be the new South Bend?

But the Eagles will gladly settle for “Rock Hill, South Carolina: Home of Winthrop University.” And if they make it through the weekend, no one will forget it.