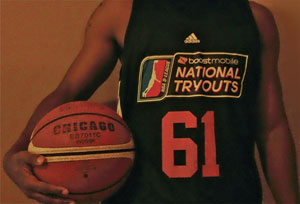 The time is 9:45 a.m. I’m in the Moody Bible Institute Downtown Chicago.

Sorry for the wait, “Team 16 stand up.” My squad was the last team at the NBA D-League National Tryout called to join our assigned coach. And it turned out our head coach was running a little late.

We were given a “temporary coach”—former NBA player and University of Illinois standout Kenny Battle (YouTube him). Coach Kenny would turn out to be a great fit to our team as his natural enthusiasm matched our excitement for having this great opportunity.

Every team had 30 minutes of practice time run by the team’s assigned coach. We (Team 16) had the first break of the day, so Coach Kenny brought us all into the hallway to get to know one another. After we went around sharing names, stories and hometowns, I took the time to make sure we were all on the same page offensively and defensively.

I needed to find out everyone’s strengths, where they like to receive the ball and where they had no business catching it. I wanted to know what kind of player they saw themselves as. Are you a slasher? Are you a scorer, or a defensive specialist? Do you shot the three?

It was our turn to take the floor for our 30-minute practice session, and (unlike Iverson in his early years) I was going to make the most of it. We started out in a lay-up line and you could immediately see who had skills, who could jump, and who needed a little help with their “game.”

As we progressed to the one-dribble pull-ups, I got a better feel for who had decent shooting form and a consistent stroke. After hitting a handful of shots in a row, there was verbal acknowledgment between Keegan Bell and me. “You got a nice looking shot, 61,” Bell said.

That was just the beginning of what you would call, good chemistry. When we went through motion offense that’s when the fun really started. I was setting backscreens, hitting teammates with flair screens all while directing the offense verbally and also with my play.

Not everyone knows how to run a motion offense so I made sure everyone was in the right spots and kept the right floor spacing. I worked up a good sweat, I was warmed up ready to play, practice was over but the time was only 11 a.m.

It was time. Our team was made up of basically seven guards and two forwards. So we started a slightly taller lineup to match-up with Team 17’s size. All the minutes would be split equally until the last five minutes where the coaches would play their best lineups. So there was no time to take plays off.

It was a playoff atmosphere, prime time 1 p.m., and we were playing on the main court. The importance of this game was amplified by the row of scouts stretched across the baseline with notes, pen and roster sheet in hand. I could have been anywhere in the world, but this was where I was supposed to be.

The game started off fast with back-and-forth action. Team 17 had a size advantage on us, one they would exploit in the opening minutes of the game. My role for the day was the “game changer,” or as other people may look at it… Coming off the bench.

But I wasn’t going to wait until I checked in to put my “stamp” on this game. From the opening moments I turned into Travis Bledsoe, “the coach.” I was yelling help from the sideline: “Watch out for the back screen;”

“Ball screen right;” “Screen left get through.” After the first timeout was taken, I greeted my squad with high fives and tons of encouragement.

My time had come. This was why I drove hundreds of miles to Chicago, IL. I felt it in my heart that it was time to give the NBA D-League a tryout. As soon as I checked in, I was searching for someone to unleash 94 feet of hustle and tenacity upon. I found the point guard, looked at my teammates and said, “We’re picking up full court, let’s go.”

After getting “after it” defensively on my first possession, the ball bricked off the rim hard, and I chased down the rebound. I grabbed the ball and spun off the defender in one motion. I pushed the ball up the left side of the court, as the big man forced to stop the ball. I hesitated at the three-point line, froze the defender, took the bump and got to the basket for an easy layup.

If you’re a player, you know the importance of getting an easy bucket to get yourself going early. Well, I was on the scoreboard in no more than 30 seconds into the game. I felt great, but with no celebration, I was back on my “94 feet” of defense, causing havoc.

But it wasn’t just “my man” feeling the punishment, my team defense was also in full affect. I was calling out back screens, I was bumping cutters, jump switching ball screens. Yelling, “Switch I got yours;” “I got your help left, help right.” The talk became contagious once I stepped in and took a charge for my teammates. At that moment Team 16 realized that I was willing to do whatever it took for us to win this ballgame.

The grind defense got me going on offense so I caught the ball on the wing with five seconds on the shot clock. There was a 6-6 forward guarding me. I took a size-up dribble, squared up, shot faked. He bit… So I stepped through and pulled up of the glass (bank was open) as the shot clock horn went off.

Yes, I practice that shot and it just paid off.

The way the team responded to my energy and effort in a way that words couldn’t describe. We went into halftime with a nine-point lead. The feeling is good but we know the game was far from over. I started the second half back on the bench and hopped back into coaching mode quicker than I scored my first basket.

But we came out flat in the second half. Steve Strong and Team 17 went on a nice run to bring the game to a tie. We were forced to take a timeout—about nine minutes were off the clock and we were playing 20-minute halves, running time. I subbed back in.

It was the last 10 minutes of the ballgame. Overseas, that’s the fourth quarter (win time). At that point, I played the role of “the closer,” time to finish this game out.

Without wasting time, I picked up full court and encouraged my teammates to do the same. Within minutes, the pressure began to wear them out again. Our defense started to speed them up and we got our transition offense going. Without exaggeration, let me describe the turning point that broke the game wide open.

We took the lead back, but it was still a game at that point. I caught the ball on the wing, as I penetrated, the middle the defense attempted to cut me off. I spun back to the baseline and got the floater to go high off the glass. I immediately denied my man the inbound pass.

They are forced to pass it in to a shaky ball handler so when he attempted to beat my teammate up the court, I swooped in for the clean steal, and took it in for an uncontested lay-in. As I turned around to run down the court, I caught the inbound passer “asleep.” I jumped the pass, stole it from my man and drove in for the lay-up. They had to foul me…

I was on my way to my own personal 6-0 run in about a one-minute stretch, and we let everyone know it with our team celebration. When I walked to the free-throw line, Linwood (No. 152) looked at me straight in my eyes and said, “I love you man.” Without hesitation I said, “I love you too fam,” and proceeded to sink the free throw.

I had made a major impact not just scoring the ball, and not only with my defense but with my leadership. When I subbed out of the game, there was a little less than three minutes remaining. We had just gone from a tied ball game to taking commanding 20-point lead.

We went onto win the game by double digits but that was only half of the excitement. The look on my teammates faces after the game was priceless. The look was of respect and admiration for the passion and enthusiasm that I had just left on the court. The energy was contagious and it helped all of us play an amazing game in front of dozens of important scouts and coaches.

We were hyped and proud of what we just accomplished. Size-wise, we were the underdogs, but as far as heart goes, we dominated like “Titans.”

Individually, I played one of the best overall games of my life. I was involved in every aspect of the game (rebounds, steals, assists). I made my presence felt offensively, but I was the most proud of my defense.

I was all over the court, diving for loose balls, chasing over screens, taking charges, communicating, simply shutting my man down—all of the little things that help a team win. Now it sounds easy but not everyone is willing to make the sacrifices necessary to win games. It was all about the win and I left it all on the court.

Game 1 was in the books. With one win under our belt, the only thing distracting us from continuing the thrill of victory was knowing that at 5 p.m. we would have to prove this was not a fluke and do it all over again.