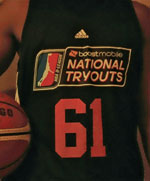 As I left Chicago, IL, that Sunday morning following the Boost Mobile D-League National Tryout, highlights of Games 1 and 2 were still fresh in my mind. Images of me attacking the basket, grabbing offensive rebounds, diving on loose balls and taking charges replayed over and over again. I led my team to two victories, not just with my talk but by example.

On the ride home, I knew for a fact that I left every piece of me (my heart, my soul) on the hardwood. With no regrets, I could live with results. So let the waiting begin…

I dream to obtain the D-League player contract. I think about it every day. I work for it every day. I put myself in the best position to be successful—whether that means getting up extra shots when running summer basketball camps or learning the game through coaching.

I take the meaning of “coach on the floor” literally. Along with working on my basketball skills and fitness vigorously, I have been enhancing my overall knowledge of the game under the tutelage of legendary high school coach Greg Amundson for the past eight months.

Coach Amundson is a nine-time state champion, who won six straight at one point at Mandan (ND) High. He also was awarded the National High School Athletic Coaches Association (NHSACA) Girls’ National Coach of the Year in 2010 and was inducted into the North Dakota Coaches Hall of Fame. Talk about a resume. He coached at Mandan (29 years) longer than I have been alive.

After a long, hard decision and plenty of self-talk last year, I decided to take time off to be closer to my family and refocus on my life goals. It was a hard decision, but as the saying goes: “If you love something, let it go and if it comes back, that’s how you know it’s meant to be.”

I wanted to stay close to the game of basketball and learn from a coach’s point of view. But I couldn’t just take any coaching job. I needed to learn from a veteran. When I interviewed for the only girls’ basketball job I applied for, I met Coach Amundson, who just arrived at Centennial High. We had a great conversation and good chemistry. And the rest is history.

I was hired as the girls’ ninth grade head coach and the eighth grade traveling head coach. I also helped the varsity as a skills coach. Let’s just say I got a lot of coaching experience in a short amount of time.

I was blessed enough to lead my eighth grade traveling team to a 24-win season and a second place finish in the MYAS state tournament. I led my ninth graders to a winning season (sometimes with only five available players). I also helped a new-look Centennial Cougars varsity reach the section championship game after upsetting No. 1-seeded Roseville in the semi-finals.

But the most gratifying part of coaching was being able to teach and learn the game while watching the girls develop into smart, skilled basketball players.

It is essential for every player to buy in to the coach’s system and philosophy. It’s a lot easier said than done. You need to convince your squad that playing for each other is the only way to achieve team and individual success.

Being a coach has enhanced my leadership qualities and overall understanding of the game tenfold. With the experiences of playing professionally overseas, being a head coach and assistant made me a more mature, well-rounded basketball player. Overseas basketball is all about the team concept. It is very important that no one player is bigger than the team. Every player needs to fill a role and play it to their fullest.

I’m trying to perfect the science of being a player/coach on and off the floor. I feel like I would not only be an asset on the court but also in the locker room, at practice, on the sidelines and in the community. In order to become a great player—or even a good player—you must listen, think and act on what you’ve learned.

I feel like I was born for this profession. This is the life I chose to live. No matter what happens at the end of June, basketball will always be in my future. So I will let the chips fall where they may. Whether it be playing, coaching, reporting or teaching the game—basketball is written in my DNA. I can’t change that.

So wish me luck as I wait for the NBA D-League Tryout results… Better yet, pray for me as I continue my basketball journey. I’ll be praying for you.

Dare to follow your dreams… Who knows? One day they might come true. (If you work hard enough.)