Jerrah on the Hardwood 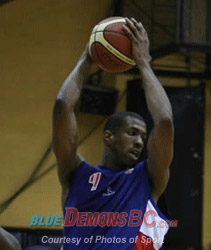 You know the NCAA marketing campaign that states: the vast majority of their “student athletes” will go pro “in something other than sports.” We’ve all seen the overly corporate, slightly slimy looking commercials of doctors, judges and probably some kind of engineer running a play leading to an alley-oop in an empty arena. It’s somewhat effective and represents a nice little idealist dream. It may even be true of most D2 and D3 student athletes, but it discounts some vital facts related to the people who play at the top level: 1) These players don’t magically stop becoming basketball players upon graduation, and 2) Just because college is over doesn’t mean the dream of playing in the NBA is.

Enter Jerrah Young, a 6-7, 225-pound Chicago native who may very well have expected to be a player in one of these ads, but whose ambition and will to succeed allowed him to carve out a fledgling pro career in the most unlikely of places—Ireland. Basketball in Ireland isn’t exactly the most popul

ar of sports, possibly not even top 10, but numbers are growing and it is contained in a small but incredibly passionate community.

Going from playing with the Toledo Rockets of the MAC (where he averaged 10.5 points and 6.5 rebounds in his final season, ’07-08) to the UCC Demons in Cork, the second biggest city in Ireland, isn’t exactly a natural progression. On his expectations of playing in Ireland, Jerrah says: “I wasn’t sure of what to expect prior to my professional career in Ireland,” he recalls. “I was only accustomed to college style of basketball. The forward position is the most dominant in the league so I was focused on raising my level of play even more to compete at the highest level possible. Once the season began I had to quickly learn that I had to become a smarter player on the court rather just depend on my talent and athletic ability. For the first time playing with men that were a lot older and more experienced than myself.  In order to be successful I had to make this adjustment.”

To say that Young managed to make this adjustment would be something of an understatement, as he averaged 22 points and 12 rebounds a game using his impressive athleticism and superior instincts to beast inside. He quickly managed to cement his place as a fan favorite by regularly dropping  20-rebound plus games. His performances are doubly impressive when you consider the pressure put on American imports to perform in Ireland. The Irish Superleague is semi-pro, meaning the American or foreign players brought in are usually the only people getting paid. This leads to massive expectations on the players brought in, as many clubs see their import player as the difference between them winning or losing the league. Put simply, the clubs with the least effective Americans are usually the basement dwellers. The performance of a club’s American player is given such huge importance that it’s not unusual for players to be released after as few as two unfavorable games. Considering these pressures, seeing Jerrah’s season culminate in his being named the Superleague Player of the Year is all the more impressive.

Despite the perceived differences, Jerrah didn’t feel he had to change all that much between the college and European games: “As far as my team, the style of play didn’t vary much from what I was accustomed to.  The reason being was we had a great coach from America named Douglas Leichner, who kept his style of coaching the same to fit our team perfectly. All the players in the league were extremely fundamentally sound and mental mistakes were rare. When players didn’t have the athleticism as others they would use fundamentals and smart plays to gain the advantage.”

As far as getting used to life in Ireland, Jerrah again didn’t have much of a problem, noticing that he only had to adjust to minor issues such as food portions and getting used to the time difference: “The toughest part was getting adjusted to the time difference when I first arrived. After about a week I was pretty much back on track. When I first arrived, one

of the things that I had to quickly get used to was the portions of food served. They were so much smaller than what I was accustomed to receiving here in America. Also, the people there are have no problem walking long distances there whether to a grocery store or for a night out at a pub. “

Anyone starting to spot a trend here? Any adjustment he has needed to make, either minor or major, Young has made with ease. This same versatility sums up his game; while he needed to be more of an inside presence with his club, he also showed glimpses of a nice mid-range J , lockdown D and great hustle. Young played center in Ireland through need, but could easily be a versatile and athletic combo forward at the next level. There’s a precedent of sorts in Mario Elie, who spent some time playing in Ireland before going on to win three NBA Championship rings.

Regarding Jerrah’s ambitions, he knows exactly what he wants, and it consists of three letters…

“As of right now I’m in the gym working out the majority of the day improving all the aspects of my game. Eventually I would like to play at the highest level of basketball possible which is the NBA. Until the day that I reach the NBA I will always have in my mind that I’m not where I want to be.”