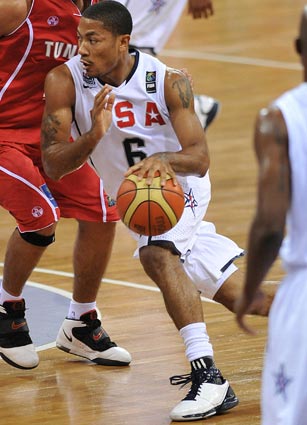 Five straight games in group play, followed by three straight off days. Team USA didn’t exactly breeze through Group B, but they got the job done. Now that it’s literally win or go home, Coach K’s squad will need to pull off four consecutive victories to win gold, beginning tonight against Angola. Considering the Game 7 mentality each player must bring to the court, it’ll be interesting to see how the inexperienced will manage it.

Besides Lamar Odom and Chauncey Billups, nobody else has dug themselves in for a long NBA playoff run. Sure, there have been lengthy NCAA tournaments for some (Westbrook/UCLA, Rose/Memphis, Love/UCLA), but for the rest it’s uncharted waters.

Like the group stages, the same five will start for tonight’s round of 16 game.

Barring any catastrophic collapse, look for Team USA to win with relative ease, and await the winner of the proceeding game between Russia and New Zealand in the quarter finals.