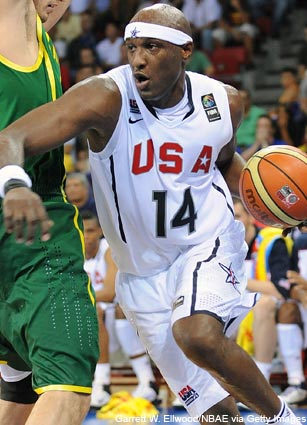 Call it a scare or a wake-up call or a warning. Call it whatever you want. There’s no debating what happened last night against Brazil exposed the Americans. There certainly is a way to defeat them and if Barbosa’s desperation layup spins in, we’d all be ready to break the “In Case of Emergency” glass. Thing is, what exactly is Coach K’s backup plan for nights like yesterday?

He played Durant all of 36 seconds and persisted with the over-matched Russell Westbrook guarding Barbosa at the end of the first quarter, who was running rampant for 8 points. Brazil held Team USA to 42 percent shooting (on a measly 8 assists), while forcing 22 turnovers. What the South Americans did effectively was pound the ball inside to Tiago Splitter (13 and 10), setting up kick outs or driving lanes, taken advantage of by Marcus Vieira (16 points on 2 threes).

Three games in, it seems Stephen Curry and Danny Granger have become the 11th and 12th man, while the hero against Slovenia, Kevin Love, barely featured yesterday. Eric Gordon and Rudy Gay didn’t see much action either. With such a young squad, Coach K will eventually have to throw the inexperienced into the fire, depending on them when the starters need a breather or aren’t getting it done.

With a minute remaining in the game and the score virtually locked, it was interesting to see who on Team USA would take control. Unsurprisingly, it was Mr. Big Shot, Chauncey Billups, with the ball in his hands.

The Americans now sit atop Group B with two games remaining, including tonight’s affair against Iran. A win and they advance to the knockout rounds, where they can’t afford these mental lapses against the likes of Argentina, Lithuania and the dominating host country, Turkey.

ESPN will air the game live at 12:00 PM EST. Check ESPN 3 for online coverage as well.

-On the one day it rains, of course the wireless becomes spotty. Stay with me, I’ll try and update as much as possible. Things are running really slow right now.

-Two guys holding an American flag and an Iranian flag with a white flag between them. Right spirit. This is basketball, not politics.

-The most significant threat the Americans face today is 7’2″ Hamed Hadadi. Tall and lengthy. Immediately Durant goes at him and draws the foul.

-#12 on Iran, Arsalan Kazemi, is their up-and-comer. He’ll be a junior at Rice University this fall and averaged a double-double for them last year.

-Media members were debating what the over/under was on how many points USA outscores Iran. It’s 6-5 with 6:03 left in the first. USA very sloppy on a couple of possessions.

-USA is attacking Hadadi every chance it gets. Basically, if you get him into foul trouble, Iran loses the marginal hope it had to win this game.

-There you go, Chandler bodies Hadadi up and draws his second foul. Coach Matic decides to leave him in. What other choice does he have? Remember, it’s 5 fouls and you’re done in FIBA.

-Quarter ends 19-13 USA. Don’t expect it to stay this close for much longer.

-Stephen Curry and Eric Gordon two-man game ends in a made three. File that under “obviously.”

-USA had 7 turnovers in the first, continuing their sloppy play throughout this Group.

-I said it the other day, Kevin Love can score on any player bigger than him. Two possessions he’s gone at Hadadi and come up the victor. He uses his body so well to gain leverage.

-With that three, make it 9 straight points for Love.

-USA up 39-24, shooting 52 percent but still not as sharp as they’d like. 10 turnovers and 14 Iranian free throws isn’t going to please anybody.

-Granger gets beat badly by Kazemi, forcing Coach K to call a timeout. Maybe there’s a reason Granger hasn’t seen much burn. He looks out of sync out there.

-Four forced turnovers to start the quarter for USA. Defensive intensity turned way up right now. Bodies everywhere and deflections on everything.

-Rose with three layups this quarter. His first step is lethal. If he’s by you, it’s over.

-USA up 20 with about 5 remaining. Wonder how much longer Coach K leaves the starters in..

-And there go the starters, save for Rose who buries a jumper, at the 2:41 mark.

-Westbrook has no fear against any defender. He’s been jumping into Hadadi all game going to the rim. He’s got a strong frame to handle all the punishment though.

-You know when Tyson Chandler is taking mid-range jumpers, you’re either up or down by a whole lot.

-Hadadi with the dunk and foul, as Gay fails to wrap him up. Hamed then screams right in his face. If Gay finds a lane, be sure he’s going for the poster finish.

-Iran has put up about 4 air balls this quarter. Hadadi back in. After every bucket he makes, he stares at his opponent. He never just turns around and heads back to play defense. He has to stare before he leaves.

-Love to Westbrook for the reverse jam. Even the PA announcer let out a “wooo” before he said Westbrook’s name.

-That’s your ball game. 88-51 USA. They officially advance to the knockout stages. Have one more group game tomorrow against Tunisia. Should be another blowout. See you then!