Original Old School: The Team That Wasn’t There 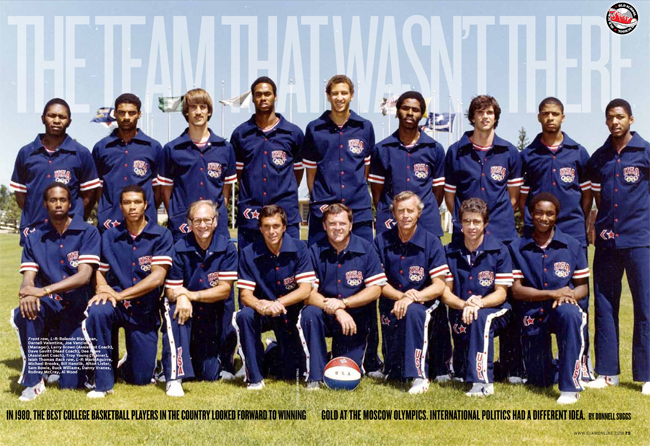 In 1980, the best college basketball players in the country looked forward to winning Gold at the Moscow Olympics. International politics had a different idea. From SLAM 147, this feature documents the team that never came to be.–Ed.

As the most decorated country in Olympic basketball history, the United States has come away with every Gold medal it could win with the exception of the 1972, 1988 and 2004 games. The ’72 setback we’ll discuss later on, the ’88 Bronze medal ushered in the creation of the Dream Team, and the ’04 Bronze medal finish tightened up the “anything will do—just add NBA players” model.

Disappointments and setbacks aside, Christmas Eve in ’79 set the stage for the only time the US couldn’t even try for Gold. That evening, the 40th Army Regiment of the Soviet Union invaded Afghanistan as quietly as a cadre of Russian tanks can invade someplace. President Jimmy Carter announced that the US would not participate in the ’80 Olympics, set to be held in Moscow, if the Soviet Union didn’t withdraw from Afghanistan. What happened next was unprecedented and set in motion a first in the history of the United States’ Olympic basketball. When the Soviet Union refused to withdraw from Afghanistan, the US backed up its threat and boycotted the ’80 Summer Olympics. Several other countries (including China, Japan, West Germany and Canada, to name a few) joined the US boycott, and altogether 65 countries did not participate.

For USA Basketball, what could possibly be worse than losing in a Gold medal game (i.e. in ’72) or leaving a foreign land with a Bronze medal (like in ’88)? How about not even having the chance to play for one?

The US had a squad ready in case President Carter changed his mind. Some of the best players the college game had to offer were invited to make up a team with no games to play, no tournament of champions to win, no gold to go after. “We had a heck of a team, we had great chemistry all throughout tryouts (held at the University of Kentucky) and during preparation for the games,” says Isiah Thomas, now the head coach at Florida International University. Thomas was the team’s starting point guard and fresh off of an impressive freshman year at Indiana University. “Most of us had played together on the ’79 Pan American Games Gold-winning squad and were really excited about a chance at back-to-back Gold medals.”

Playing alongside Thomas were some of college ball’s best, including Zeke’s homeboy and DePaul University star Mark Aguirre. Aguirre was coming off a fantastic season of his own in which the 6-6 forward averaged 26.8 ppg while establishing a reputation for serious post moves. The firepower didn’t stop there, as the team also boasted Kentucky freshman center Sam Bowie, Kansas State sharpshooter Rolando Blackman, Louisville forward Rodney McCray, Kansas guard Darnell Valentine, Bill Hanzlik out of Notre Dame and Arizona State big man Alton Lister—all of whom later played in the League for multiple seasons, some with great success. Another of the young men on the roster was Buck Williams of Maryland, who would go on to be the NBA’s Rookie of the Year in ’82 as well as a three-time All-Star. Point is, this team was stacked. At the time, they were all just college kids, some as young as 19, trying to figure out if they should pack for Moscow or register for summer school.

The coaching staff was solid, too. Providence head coach and future Big East president Dave Gavitt was named the Olympic coach after Bob Knight led the US to the Pan-Am gold in Puerto Rico but got arrested after a run-in with a policeman. UCLA head man Larry Brown and UConn’s Dee Rowe worked as assistants.

“I believe that our team had the talent and character to go to Moscow and win a Gold medal for the United States,” says Gavitt, now retired and living in Florida. “Certainly, it would have been a challenge to win Gold over the host Soviet Union or eventual Gold medal winner Yugoslavia, but we liked our chances with the players and coaching staff selected to compete.”

The United States’ basketball beef with the Soviet Union went back to Munich in ’72. To make a long story short, current Phily 76ers head coach and then-Illinois State star Doug Collins hit two big free throws with three seconds left to put the US up 50-49, only to have an unbelievable chain of events—involving wrongly timed horns, timeout controversies and questionable clock running—give the Soviets three chances to take the lead. Eventually, they did, taking a tarnished, 51-50 win. The US squad has yet to accept the Silver medals they were “awarded” in the wake of the fiasco.

Four years later, the United States’ ’76 squad ran all over the competition in Montreal, led by a roster coached by North Carolina head man Dean Smith and featuring four Tar Heels: Walter Davis, Phil Ford, Mitch Kupchak and Tom LaGarde. The Soviets finished third. With Bronze medals sandwiching the controversy of ’72, the Soviets needed the ’80 Games to prove they could beat the Americans fair and square with many of the players who’d played in Munich. Sergei Belov, who in ’92 became the first European inducted into the Basketball Hall of Fame, was the Russian Michael Jordan, the country’s best player, who’d played in Mexico City (1968), Munich and Montreal. Belov and the rest of the veteran squad were primed and ready for a war they would never get the chance to fight in.