(Too Much?) Power to Influence 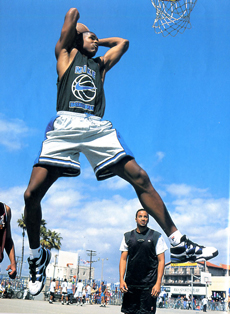 When I was a boy, all I wanted to do was play sports with my friends in my suburban neighborhood of Glendora, CA. I was tall, but not huge. I wasn’t fast, but not slow either. I could jump well, but that was by “white boy” standards. And although I come from family with basketball history (my father and two older brothers played college basketball), no one in their right mind would have predicted that I would make it to the NBA when they saw me at 13. Even after two years of competing at a high level against the country’s best talent during high school, I don’t think a lot of people thought I would make it to the NBA.

That perception was the best thing that could have ever happened to my basketball career. Let me explain.

I began playing AAU basketball (stands for Amateur Athletic Union, a semi-organized summer basketball circuit) when I was in 5th grade. By the time I was 13, I was traveling all over California and Las Vegas, Nevada for AAU tournaments. When I arrived in high school, that is when things changed.

I first noticed the change on the annual basketball tournament in Las Vegas. I went to a shopping mall with my team and coaches in the “Caesar’s Palace” hotel on the Vegas trip. I was 14 years old and a member of Southern California All-Stars, a collection of the best high school players in Los Angeles. The coach/owner of the team was a man named Pat Barrett, an employee of Nike and a well-known man in the AAU basketball circles. Mr. Barrett took all of us into this giant shoe store in the mall and told each kid that they can have any two pairs of Nike basketball shoes we wanted. I was so excited! Although we were already sponsored by Nike and wore their sneakers, I had never had a “shopping spree” (can two pair of shoes be considered a spree?) before. Little did I know, it was just the beginning of what was to come.

The best players on these elite AAU teams are “taken care of.” Whatever the players wanted—shoes, clothes, access to vehicles and parties—it is there for the taking. It didn’t seem right, but the more I saw it, the easier it became to accept it as the way it was. Southern California All-Stars had several of those players, but one of them stood out from the rest. He didn’t play on the same team as me because of the age divisions in AAU basketball, but Schea Cotton was one of the greatest high school talents anyone had ever seen. He was, without question, the No. 1-rated player in the country and had his pick of any school. At 17 years, Schea was already 6-5 and weighed 215 pounds. He had the ball handling and shooting skills of a guard and all the athleticism (42-inch vertical leap) and strength one could ask God for. He was unstoppable on the basketball court. The only problem was, he came to prominence at the worst possible time.

AAU basketball had been gaining popularity for years, but in the late 80s, early 90s, it exploded. Basketball players around the country were “nobody” unless they played against the best in the U.S. in these sanctioned AAU tournaments. By itself, these AAU competitions were great for the game. As a kid from California, where else could you test yourself against the best players in Washington D.C.? AAU basketball was the only way to truly evaluate where a player stood in comparison to his peers. Somewhere along the line, however, a battle ignited between two athletic shoe companies that would change youth basketball as people knew it. Nike and adidas, in an attempt to sell more shoes, began sponsoring AAU teams and their coaches. There were not a lot of rules or regulations regarding summer basketball, and these companies took advantage. A lot of cash and apparel changed hands throughout the years in order to have the best basketball players wearing a certain brand of shoe. It was pretty crazy, but it was very real.

Schea Cotton was caught in the middle of all of it. Everybody wanted a piece of this kid. He traveled all over the country playing basketball in Nike shoes. He was the one who Nike had pinned their hopes on being “the next Jordan,” a player/personality who could be successful at the professional level and earn Nike millions of dollars. So what happened to him? Schea couldn’t qualify for college after the NCAA invalidated his SAT score. He played junior college in California, later played at Alabama, but never reached the potential that most everyone who watched him play in AAU expected.

Do you think that maybe AAU basketball hurt Schea more than helped? I certainly do. Maybe instead of shopping in Las Vegas, he could have been going to summer school or working on his game with his high school friends. I believe that if Schea Cotton was born 10 years earlier, he would have had an NBA career. Of course, Schea has to accept part of the blame for his mistakes, but I give him some slack because he was just a kid. But the perception around him from the age of 14 was that he would be a “can’t miss” NBA superstar. This perception hurt Schea more than anything else. It was too early. The attention was too much. Some kids can handle all the attention and make it anyways (Kevin Garnett, Baron Davis, Stephon Marbury, etc.), but I would argue that most cannot. I’m grateful that I didn’t have people around me telling me that I am going to make it to the NBA. My goal in high school was to get a college scholarship, not to make money.

There is a book that was recently published that perfectly describes what went on during this time and arguably still goes on. The book is titled, Sole Influence, by Dan Wetzel and Don Yaeger. It was a well-written, researched and thought provoking book on the problems of AAU basketball. What made the book so interesting to me was the fact that I grew up playing at the exact time that this book was being researched. All of the players who were discussed were my peers: Jonathan Bender, DerMarr Johnson, Keith Bogans, Marvin Stone, Marcus Taylor, Tyson Chandler, JaRon Rush, etc. Some I knew personally, others I didn’t, but I played against them and heard the rumors surrounding them. Sole Influence brought many of my suspicions to light. Were guys getting paid? How much? How can this stuff happen and how do the people involved not get caught?

I haven’t been around the AAU basketball world in a long time, but my older brother Adam, a Division I college basketball coach, is around it every summer in June and July. He tells me that it isn’t quite the same as it used to be, but a lot of same people are still there. When I look back on my youth basketball career, I was fortunate to keep most of that stuff at arm’s length. I enjoyed the free shoes and nice uniforms, just like any kid would, but I flew under the radar for a long time and I believe it allowed me to “keep the hunger” to improve every year.

That is what AAU basketball should be about: Testing your talent and skills against your peers. All the rest should be kept at a minimum. I should thank the AAU for allowing me to compete, SoCal All-Stars and all the other teams I played for, Nike, and all my coaches for helping me develop. But more importantly, I want to thank all the magazine writers and online editors who kept my name off those player-ranking “Top 25 prospects” until my senior year, when I was ready. I hated you then, but I love you now.