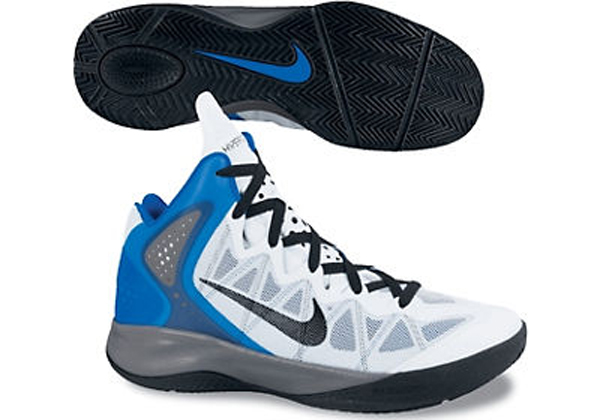 
The 2012 Mayan Doomsday is something we’ve all heard, read or watched about in the last year or two. I don’t have any insights on the validity or lack thereof on the theory for you, but I will say this: I hope we at least make it past Spring 2012, because Nike has a lot of cool stuff planned for us.

In addition to the Air Max Barkleys that we looked at recently, CounterKicks has images and info on a number of other sneaks that will interest you for either on or off the court wear for this time next year.

The Nike Huarache Bball 2012 is a modern take on a shoe that the Fab Five rocked at Michigan 20 years ago. The multi-directional flex design on the sole is a new touch.

The Nike Zoom Hyperdunk 2011 Supreme is shown in a Wolf Grey/Green Abyss/Current Blue/White colorway. The SPRM versions of the Hyperdunk 2011  feature an added reinforced toe overlay.

The Hyperdunk 2011 Low PE is a slightly lower and lighter version of the mid cut Hyperdunk 2011. The Flywire upper, phylon foam midsole with Zoom Air and carbon fiber midfoot shank plate are all still in the shoe.

The Zoom Huarache 2 incorporates Hyperfuse material this year and ditches the midfoot strap that the ZH1 had. As CK points out, no Knicks color here for Amare Stoudemire to wear.

The Nike Zoom Hyperforce PE has a Hyperfuse composite upper, uses Flywire supports, has Zoom Air and the always reliable herringbone pattern on the sole.

The Nike Lunar Hypergamer has a seamless Hyperfuse upper, uses a Lunarlon midsole and has the herringbone-patterned sole.

The Nike Flight Maestro Plus is a new take on Scottie Pippen’s sneaks from back in the day. The shoe has an air max unit in the heel with stylings from one of Pip’s favorite shoes.

The Nike Zoom Hyperforce is the same as the Hyperforce PEs described above, but will have a greater widespread availability.
[sg-gallery]

For some non-hoops shoes that are also dropping in 2012, check the link at CK.