Back to the Future

Bridging the gap between pop-culture, music and of course, hoops, The Almanac Brand designs apparel inspired by the most iconic images in sports history. 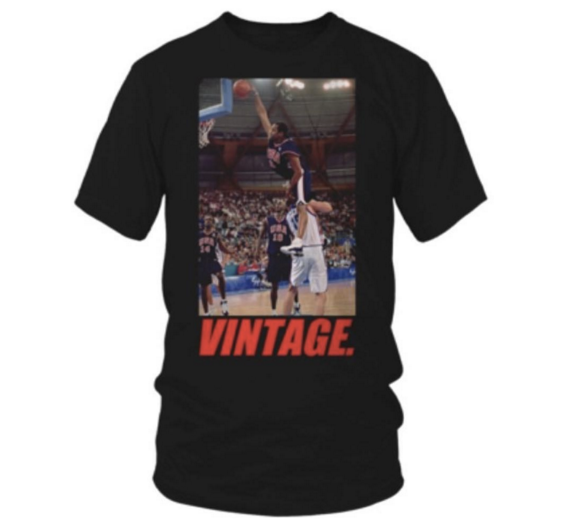 If there was ever a clothing brand that embodies what we do here at SLAM, it’s the Almanac Brand. Bridging the gap between pop-culture, music and of course, hoops, Almanac designs and sells apparel inspired by some of the most iconic images in sports history. The Portland, OR based company’s motto is “Reliving History. One Thread At A Time.” For Clark Chen, the brand’s director, telling stories through clothing is what drives the company.

“Whether it’s sports, pop-culture, music or what have you, anything people can relate to where they can remember that particular moment and then tell a story and celebrate that obviously with t-shirts,” Chen tells SLAM.

The idea to imprint these legendary moments in history was derived by a Portland sneaker head named Air Andy, whose work was later carried on by Chen. Since its start in the spring of 2014, the brand now has over 50 design models with its TITLE SERIES being the company’s crowning line to date.

The TITLE SERIES has started with flat-brim hats with the primary colors of an NBA team with the championship year laced across the front. Deliberately absent of the franchise’s logo, the hats and the corresponding year was chosen to represent a specific title season.

“One was 2002 when Kobe won his three-peat and then also the 1988 when Magic won his back-to-back. We actually could have done a lot more but we wanted to start with those two more popular years,” Chen says.

The hats will be accompanied by matching hoodies, crew necks and v-necks come the holiday season, but the fresh lids are what have jumpstarted the line. For the hardcore Laker fan, years like ’02 and ’88 will resonate with them no matter what, but that hasn’t stopped a different audience from ordering the brims.

“What’s kind of funny about that when we’ve been selling that, people have been looking at them and saying, ‘Hey that’s my birth year.’ The diehards will relate to the years but some of the younger population of the year will look at it like, “Oh, that’s my birth year’ and they might actually buy the hat for that reason,” Chen says.

Hoops swag is a way of life from head to toe, but Almanac has extended its reach far past hardwood enthusiasts. Always on the search for the next design, Almanac has printed tees from everything to movies and music.

McFly and Biff are joined by characters like the Fresh Prince, Ray Allen as Jesus Shuttlesworth in Spike Lee’s He Got Game, and ‘Pac and Biggie on shirts, too. It’s the wide range of image-storytelling Almanac uses in their brand that keeps it thriving.

“It doesn’t necessarily have to be just basketball. It could be a non-athlete too—someone that’s into pop culture. Obviously we focus a lot on basketball, just because basketball is such a lifestyle but we have some other ones that have nothing to do with basketball,” Chen explains.

Almanac drives its products heavily through Instagram. With its success dependent on the reception of the carefully chosen images to be embedded on shirts and hats, Almanac’s Insta game is absolute fire. When Chen and his team aren’t racking up likes (and subsequent sales) on Instagram, they are on the road in hot beds of AAU tournaments targeting their most successful audience.

“We’ve gone down to Vegas during the live recruiting period, especially during the July summer months, and we set up a table and sell merchandise. Especially because these are the same kids that are our consumer groups,” says Chen.

Traveling throughout the pacific northwest and down into Las Vegas, Almanac will sell their shirts, hats, and TITLE SERIES apparel to people of all ages and interest level in hoops.

From Vince Carter’s “Dunk of Death” in the 2000 Olympics, to Travolta and Jackson in Pulp Fiction, and all the way to Carlton Banks attempting to ball for Bel-Air high school, Almanac does story telling right. One thread at a time.