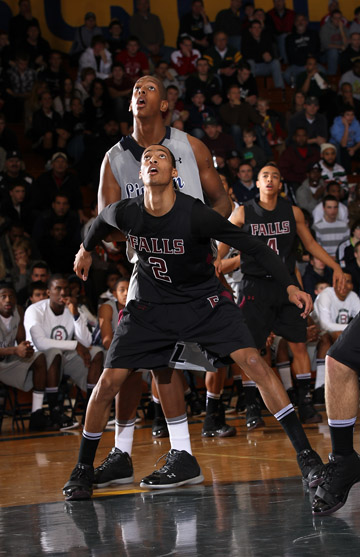 photos by Kelly Kline for Under Armour

My second day at the Under Armour Brandon Jennings Invitational in Milwaukee, which I detailed on here yesterday, began by seeing Chris Herren address the players in the hotel. As ball fans should know, Herren is the schoolboy legend out of Fall River, MA, who carved out a decent college and pro career that might have been much better had he not battled substance abuse most of his adult life. Chris, who is friendly with Under Armour’s Kris Stone going back to the Fresno days, has a book coming out in a couple months called Basketball Junkie, and if his speech to these kids was any indication, it will be gripping.

After breakfast and a quick bus ride to nearby Marquette University High in Milwaukee, I grabbed my scorer’s table seat and posted up for a long day of entertaining hoops.

In order of when they were played, here’s what happened in the four games…

Boasting a pronounced size advantage, the Patriots controlled this East-West matchup pretty much from jump.

Penn Wood star Aaron Brown, who was the game’s leading scorer with 21 points, put the exclamation on the win with a sick, leaning jam about halfway through the fourth quarter (at right). Brown was helped on the inside by the massive, Penn State-bound (for football) Shawn Oakman and their fellow senior Darian Barnes, who set a physical tone that Crenshaw had no one to counter with.

For Crenshaw, which seemed a little sleepy throughout (perhaps the 11 am start was tough for a team from L.A.?), Isaac Hamilton was the leading scorer with 20 points while his younger bro Daniel had 11 (including three triples).

The official Player of the Game award went to Penn Wood’s Brown, who will be a West Virginia Mountaineer next season. If he can catch more dunks like this one, you know the Morgantown faithful will be thrilled.

Coming from just down I-94 in Chicago, Orr had a decent crowd for this game, and the best individual player in senior Illinois signee Mycheal Henry, who scored 24 points on a variety of pretty jumpers and smooth moves through the lane. But St. Frances of Baltimore had the better team.

Led by relatively unheralded junior wing Shakir Brown, who scored a game-high 27 points, the Baltimoreans and their coach, Mark Karcher, led throughout the game. Rutgers commit Greg Lewis of St Frances (at left) struck me as a little passive, but he clearly has skills and did score 14 points for the victors.

The official Player of the Game award went to Brown, who should be a real solid signing for a mid-major in the mid-Atlantic next year.

In closing my write-up for this game I want to give a little shout out to event sponsor Under Armour for taking advantage of the fresh colors these teams wear (St Frances rocks yellow and black, Orr black and gold) by outfitting them in dope uniforms and matching kicks.