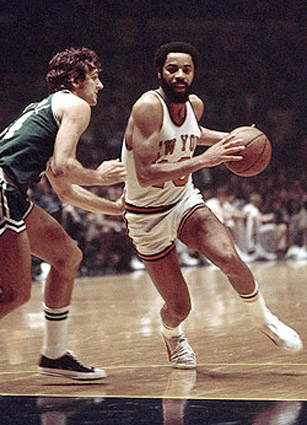 You try wearing a full-length mink coat. Go ahead, sneak into the closet and grab your mom’s. Make sure nobody’s looking. Now, slip it on. Can’t get out of it quickly enough, can you? That’s because you can’t carry it off.

Clyde could. And then some. He looked so good in fur, those PETA maniacs wouldn’t have dreamed of throwing paint on him. It just wouldn’t have been right. In fact, the animals who gave their pelts to make his coat would have been proud to sacrifice their meager lives to help the NBA’s smoothest player look sharp. Wherever he went, Walt Frazier defined cool. Turned out in a wide-brimmed fedora, with a sharp three-piece and all the accessories a guy could want, Clyde looked like a messenger from the 20’s, come to tell us all that clothes still made the man.

And then there were the shoes. Not the leather dress models that accompanied his on-the-town fashion statements. We’re talking basketball sleds. At a time when leather was just starting to threaten canvas’ stranglehold on the genre, Clyde went in a different direction. His direction. First, he wore those mean white Pumas with the black suede stripe. By ’73, when the Knicks won their second title, Clyde had set the new standard, daring to wear dark suede shoes with the white Puma stripe. We’re not talking black. They were blue. Or red. Or whatever color Clyde wanted. And they were cool. It didn’t matter whether anybody else in the pros wore them. If he did, it was just fine. If you were young during that time, you wanted a pair. You needed a pair. White, blue, anything. Clyde’s were the standard. It may be hard to imagine today, when so many other shoes dominate the landscape, but Puma ruled back in the early-to-mid 70’s. Sure, the shoes looked great, particularly when compared to the other, blander offerings. But they were Clyde’s shoes, and that made them the best.

Frazier was as suave on the court as off it. After a game, you would swear he hadn’t done anything. While other players huffed and poured sweat, their bodies heaving after two hours of exertion, Clyde had a sheen to him. He had worked hard, that’s for sure, but he had glided across the court, using his quickness and grace to beat the other guy. He had the right shoes, given that he played like a cat, never losing his cool while always preying on the weak.

He was a seven-time all-star. He is the Knicks’ all-time leader in assists. He ran the point with impeccable style and helped New York to its only two NBA titles. You want to talk about Willis Reed’s heroic performance in Game Seven of the ’70 Finals? Fine. But don’t forget about Clyde. He scored 36 points and dished out 19 dimes against the Lakers that night. That’s how it was for him. When the game was over, and the numbers were tallied, it was hard to believe Clyde had done so much.

He can still influence a game, even now. Listen to him broadcast a Knicks contest, and everything seems smoother. It isn’t a physical battle, but an athletic ballet. Laugh if you will at his unique speech patterns and habit of rhyming (“Charlie Ward is dishing and swishing;” “It’s Ewing doing!”), but know that he is bringing you, the listener, into the basketball world of Clyde. We will never approach his level of style or grace, but we can see the game as he did: free flowing, graceful, elegant. That’s all we ask for.

Clyde inhabited a universe that we can only dream about, and for a few years, his shoes gave us an entrée into that life. And we didn’t have to put on a fur coat.