Damian Lillard on the adidas Dame 4, the Evolution of His Sneakers and His Friendship with Lil Wayne

Now six years into his career, Damian Lillard has solidified his reputation on and off the floor. It’s common knowledge that he’s a walking bucket, a lethal clutch scorer and a no-nonsense competitor when the bright lights are on. And he’s been consistent in inspiring kids from Oakland to Oregon and everywhere else he goes when he’s not hooping. He’s spread a message of hard work and humility on his two albums, letting kids know that respect and passion can get them far in life.

Lillard, an Oakland native, has that unmistakable California patience about him, no matter if he’s in the booth, on the street or on the hardwood. He moves at his own pace, stays true to himself and is supremely confident that when the moment comes knocking, he can answer the call.

Lillard was at adidas’ NYC store yesterday, smoothly navigating through a crowd of about 10 kids that got the lucky chance to cook up some custom Dame 4 colorways with him. Lillard hopped in and out of helping the kids scroll through options on miadidas and signing autographs and taking pictures with people who just wanted to say what up.

Lillard, as always, was cooling throughout, chopping it up with the kids and showing off a PE version of the adidas Dame 4, his newest signature silhouette that’s sweeping the League. 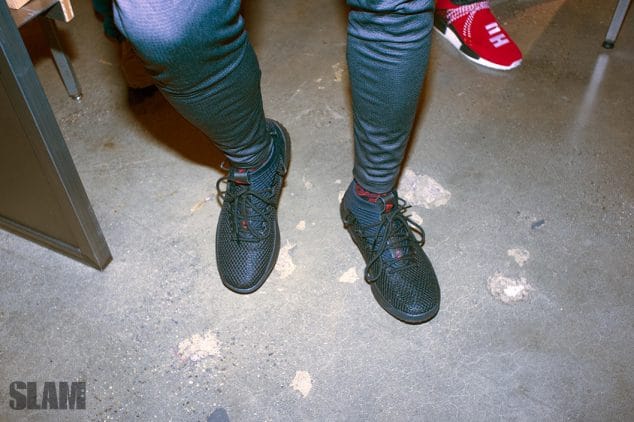 “I saw guys wearing the 2,” Lillard says in between designing colorways. “It was never as often as I do now [with the 4]. I keep seeing it. I’m seeing it in college, I’m seeing a lot of people wearing it around. A lot of people posting. A lot of guys around the League wearing different color ways. For me, it’s a good feeling. This shoe is the one.

“My first shoe, I was just so in love with it,” he continues. “I didn’t care how comfortable it was, I didn’t care what it looked like. I was like, This is my first shoe! I was really excited about it. But it could’ve been better. Then my second shoe I was really excited about it. At some point I was like, ‘I wish I had this, or, I wish I had that.’ Then once we got to the fourth one, I was like, ‘Man, I really, really love this shoe.’”

Jesse Rademacher, Design Director for adidas Basketball and the head designer on the Dame 4, likes to joke about how Lillard should have an office on the adidas campus because he’s so involved in the design process of his sneakers.

“I was there so much that there was a group of women in one office, in the HR office,” Lillard says with a grin. “And they were just like, ‘You’re here so much that we’re just going to make this your office over here. You’re going to have a table and you’re going to have your own corner.’ They actually put my jersey up there, a poster, and that was my corner. That was my cubicle. That’s a real story.”

Lillard’s stories are starting to pick up as much steam as his game. His music and his sneakers are all about the narrative.

“I think telling [stories] through sneakers, it’s more of an imagination,” the Blazers point guard says. “You try to figure out what colors match up with that time. It’s not something as simple as I went to Weber State, we wore purple. Like, ‘Glow in the Park,’ coming up with the materials to give it the feel of the story that you want to tell. With music, you’re just using words, you’re letting people hear it. But they’re not there to see it so you’ve gotta use the words to paint a picture to make them feel like they witnessed whatever it is that you’re telling.”

The 27-year-old says he finds inspiration through the connections he’s built with his fans, both young and old.

“I’ve been huge on finding ways where I can connect with people, connect with fans,” he says. “They may not be in the same position as me but they aspire to be. People who are even adults that wish they could’ve been a professional athlete or done music or been some type of public figure, I try to connect with those people as often as possible. My inspiration comes from the storytelling.”

His songs have featured Jamie Foxx, Raphael Saadiq and 2 Chainz, amongst others. But maybe most importantly, he’s been on two songs with Lil Wayne. Weezy made the trip up to Portland a few weeks ago to see Lillard and the Blazers beat the Thunder.

“Being who he is, the level of star that he is, he’s not just going to support anything,” Lillard says. “I mean that as far as my music. He’s not just going to do a song with me, or send me a song to get on because we cool. That means he respects me. He’s not going to come all the way to Portland and catch a game, wear the shoe if he didn’t respect it and like that as well.”

Lillard spends some more time on miadidas and talking to a few kids before he heads down to the first floor of the Three Stripes store, where a huge line of people are waiting on him. It’s Dame time.

Related
Inside the Design of the adidas Dame 4

Max Resetar is an Associate Editor at SLAM. Follow him on Twitter @maxresetar. Photos by Devlin Claro