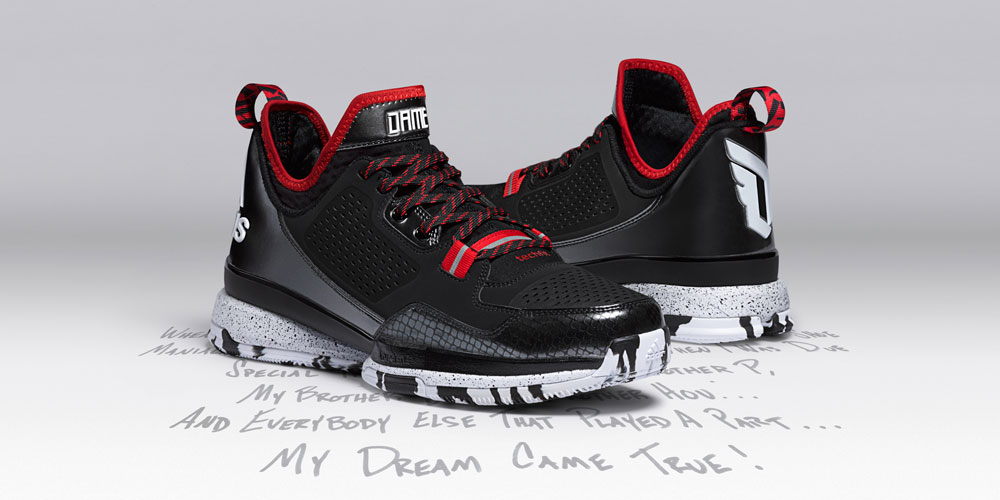 At an exclusive “Dame Love the Fans” event in Portland on Tuesday evening, Damian Lillard and adidas unveiled the D Lillard 1 signature sneaker. The D Lillard 1 is the first in a line of signature products, which will be available on February 6 for $105. You can customize the D Lillard 1 on miadidas.com beginning January 30 for $125.

Dame’s kicks feature a signature logo and details reflective of his personality, including nods to @4BarFriday and the Fly Guyz. We’ll let adidas explain the rest:

The D Lillard 1 features the new Damian Lillard logo which consists of his initials, “DL,” fusing together to create a “0.” The “0” is Lillard’s number on court, which he chose to represent the letter “O” for the three places he’s called home: Oakland, where he grew up, Ogden, where he attended Weber State University, and current home state Oregon. Affixed to the left side of the logo is a wing comprised of three stripes, a nod to the nickname of his group of closest friends and family, the “Fly Guyz.”

The Damian Lillard logo is featured prominently on the heel of the left shoe, while “Dame” is written across the tongue of the right shoe. The insole of each shoe features a unique rap lyric written by Lillard that relates to each colorway. The lyrics featured on the shoes tie to Lillard’s social media freestyle rap challenge, @4BarFriday. The D Lillard 1 is finished with premium nubuck and leather textures for a sophisticated look and plush fit.