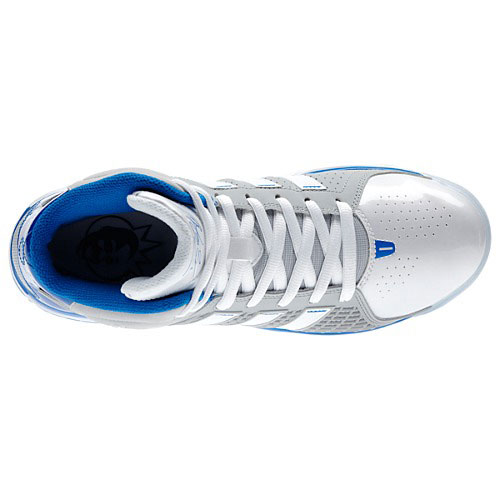 A serious “big man” shoe for one of the biggest men on the court, these adiPower Howard basketball shoes are Dwight “Superman” Howard’s signature adidas model, and they’re all about power. They feature a single-layer SPRINTSKIN upper for an ultra-light feel, rugged EVA cushioning and a Cilia Traction outsole for superior grip.

And here are the specifications of the shoe:

There is a lot to like about the adiPower Howard—it’s not a shoe that I fell in love with, but I have fallen in like with it. Among the things that I really like about it? Well, I like the cushioning. The cushioning is very good, and it’s attributed to a new cushioning set-up that adidas has mysteriously called LIVE MOTION, which (according to the company) offers personalized pin-point cushioning. I found this to be true, especially when I was just walking in the shoe. The LIVE MOTION is responsive underfoot and bouncy, and it has great impact protection from the forefoot to the heel.

What else is good? The support of the adiPower Howard is very good, and there’s several reasons why. It has great ankle security, which comes from the eyelet placement, and more importantly, the prominent malleoli pads on both sides of the ankle collar. The lateral side SprintSkin cage and medial side synthetic panel allows for a snug fit that isn’t obtrusive to the foot; also, the fit in the heel also is notable.

The comfort of the adiPower Howard is not to be overlooked, either. It’s plush, and even that comes from a selection of sources in the shoe; the polyurethane sockliner is a great place to look (with his smiling likeness on the insole heel), as is the lining of the rearfoot. The fit in the toebox is great and roomy, but doesn’t yield in a good fit and I didn’t swim in the shoe, so to speak. The tongue is just thick enough, but is thin enough and the oval laces are soft and add the necessary volume to the adiPower Howard’s security when laced.

I can’t undersell the adiPower Howard’s traction; it’s appropriately sticky and has good grip to the floor, which is no doubt helped by adidas’ Cilia Traction Surface outsole, which famously was featured with rave reviews in the first adidas adiZero Rose. The flexibility is also worth a tip of a hat for a big man’s shoe; credit there is given to the combination of lightweight upper materials, the EVA midsole, the gum rubber outsole and the freedom allowed of those materials with the inclusion of adidas’ new Z-Torsion system (described by adidas as an upgrade to the long-known Torsion, which places two deep grooves along the arch to allow easy inward rotation, but which also limits the rate at which the ankle can roll outward [effectively increase the body’s energy efficiency]).

Helping the adiPower Howard further is that it’s very attractive. It can be easily worn casually. The shoe is eye-catching without being seen as loud, either. And the same LIVE MOTION cushioning I mentioned? It comes in handy, especially off the court, when you can really feel the compression and decompression of the shoe as you walk.

Quite simply, as I said before, the adidas adiPower Howard is the best big man shoe in adidas history.

Sandy Dover is a published author, fitness & media professional, and a SLAM web columnist & print contributor whose work has been featured and published by US News, Yahoo!, Robert Atwan’s “America Now” and ESPN. You can find Sandy frequently here at SLAMonline and via his website at About.Me/SandyDover.