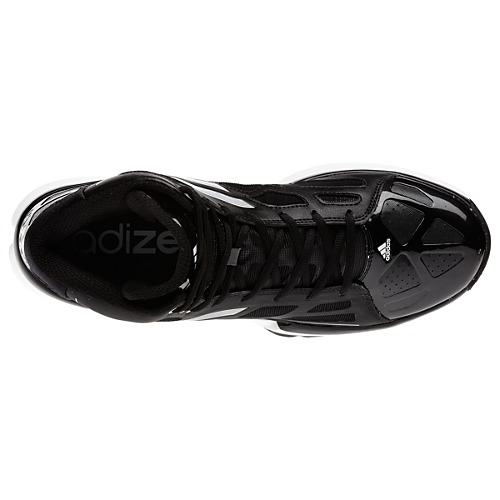 The adidas adiZero Ghost builds on the principles of the previous season’s adiZero Infilitrate and borrows from the lightweight ideas that were focused upon in Derrick Rose’s adiZero Rose and adiZero Rose 2. Endorsed by Atlanta Hawks power/small forward Josh Smith, the adiZero Ghost has a lot of good qualities that make it an admirable performer on the court.

The adiZero Ghost utilizes a variety of technologies that make it valuable as an elite level basketball shoe – per adidas:

It has really good transition and balance underfoot. The Torsion System has a lot to do with that, as it helps to distribute weight and stress throughout the shoe, when you move on the court; Torsion also provides the necessary arch support so that there isn’t too much flexion going on and putting additional strain on the arch on your foot.

What else is there to like about the adiZero Ghost? Well, there’s the very good ankle protection that’s achieved through the shoe’s stable feel (which is admirable, considering that the adiZero Ghost is a general-fitting shoe) and high cut along the lower leg. The heel fit is good, too. It’s also low to the ground, and I was impressed by this, as it only improved the playability of the adiZero Ghost. The foam padding that is regionally located in a few of the Sprint Web windows enhances the fit of the shoe, the quilted lining in the collar and tongue is very comfortable (very underrated attributes of a good sneaker), and the adiZero Ghost makes great use of an impressive lateral side outrigger, which gives it good outside-foot support (and this is only highlighted by the presence of the shoe’s noteworthy medial stability).

The adiZero Ghost, though, does have a couple of minor setbacks (in my opinion) that keep it from overtaking the adiZero Rose 2 as the three stripes’ best shoe for the 2011-2012 season. One bit about the adiZero Ghost is that while it has above-average cushioning, which is very solid and resistant to breaking down (from its EVA foam midsole), it lacks the snap/bounce of other shoes in the company (I’m think particularly of the runners, like the supreme adiZero Feather); the inclusion of adiPRENE+ could’ve given the Ghost a better bounce underfoot; If left up to me, I might have given the adiZero Ghost a full-length adiPRENE+ unit.

One other bit about the adiZero Ghost is that the traction is held back by one thing – the met head flex grooves under the ball of the foot of the shoe prevent the circular pivot point from really working as it could. In the D Rose 2, I was able to turn on a dime, literally, because the concentric circle pattern in the outsole was uninterrupted, but in the adiZero Ghost, while those flex grooves improve the transition of forward motion, they also nullify the pivot point’s purpose; beyond that, the traction is more than capable and is a winner in and of itself.

I must also address the adiZero Ghost’s “rockability”, how able-bodied it is as a design to be worn casually, as many ballers do with their basketball shoes. It’s handsome, and probably is at its best in its basic black/running white colorway (which I tested). The shiny synthetic patent leather at the toe adds pop; also the material usage of the adiZero Ghost gives it more of a premium feel without admirers of the shoe having to pay a premium cost – particularly, I like the leather Sprint Web on the medial side of the shoe, and the textile lateral Sprint Web that’s more visible to the naked eye. The high collar and flexible tongue is cool for jeans (for tuck-back behind the tongue) and coupled with the shoe’s unique placement of the three stripes, the adiZero Ghost is versatile and unassuming, but attractive, all at the same time.

As a sum-up, the adiZero Ghost is a high-quality basketball shoe that will last on the court and is sufficient on the hardwood and as a general-purpose casual shoe. Though it’s not perfect, it has great performance attributes that make it a product of high quality integrity, and again, if it’s good enough for Josh Smith – a 6-10, 240 lb. man – right out of the box, chances are it will be good for ballers looking for a shoe that can accommodate them in a variety of ways as well.

(For additional photos of the adiZero Ghost, go to Facebook.)

Sandy Dover is a published author, fitness & media professional, and SLAM web columnist & print contributor whose work has been featured and published by US News, Yahoo!, Robert Atwan’s “America Now” and ESPN. You can find Sandy frequently here at SLAMonline and via his website at About.Me/SandyDover.